How to become a comedian without having to do stand-up 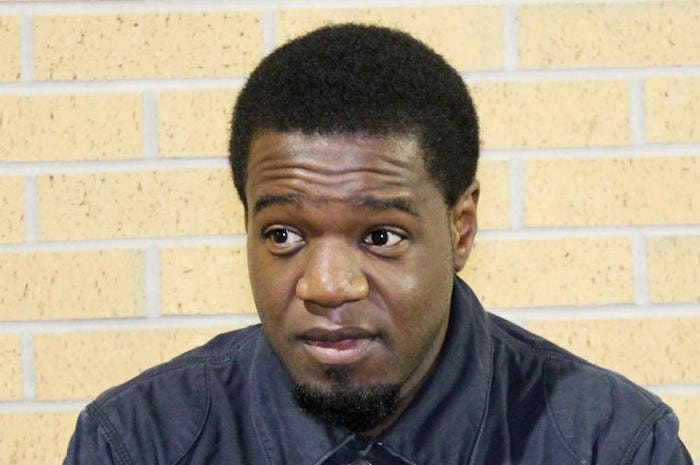 When all’s said and done, you don’t want to be one of those people who has said more than they’ve done. Eji Osigwe definitely isn’t in that camp.

A freelance web designer by day, he started off as a stand-up comedian before moving into improvisational comedy. He then set up ImproQuo, his own improv jam night.

Most recently, he has set up a variety night that gives a stage on which to perform to stand-up comedians, improvisers and comedians whose ideas or material wouldn’t necessarily fit a traditional bill.

For Eji, it actually runs much deeper than just putting on a night for people to be funny. There is real community spirit at the heart of what he’s doing.

By creating a collective of comedians, writers, actors and other people who can share and collaborate with each other, he’s using the wealth of talent on offer in Manchester to create opportunities for people interested in comedy without having to go down the traditional route.

I got the chance to sit down and have a chat with him over a brew at Fig and Sparrow.

Tell me how ImproQuo started. It isn’t everyday you decide to start an Improv Jam Night

It isn’t, Jon. Years ago I started with stand-up comedy and did it for a few years. But with stand-up there’s a lot of travelling, getting late trains back, that sort of thing. It just became impractical. So I looked for something that was still comedy. And I found Comedy Sports.

Comedy and sports often go hand-in-hand with me. But what is Comedy Sports?

It’s an improv troupe in Manchester who run courses and put shows on. Things like that. I was with them for a little while and I thought ‘I really like this, I want to put on my own night’. Comedy Sports already had a lot of people in there so I didn’t get to perform as much as I wanted. So a few of us started ImproQuo which has been going for about two-and-a-half years and it’s really grown. A lot of people have got involved and we have a nice little network now.

Why do you think ImproQuo has grown the way that it has?

It started initially with a load of us coming from Comedy Sports as we wanted to do improv regularly. We found the back room of a pub and grew it from there. People talked and it grew even more. What’s really good is that new people who turn up talk about things they have going on and so do we, which helps their nights and our nights grow.

So what spurred you on to create the variety night? What is that aiming to do that ImproQuo can’t?

The variety night is like a non-standard comedy night. It’s more for giving a chance to people who aren’t just doing stand-up. There are loads of nights for stand-up but not that much for people who want to do stuff that’s a bit different, but still comedy.

So are the audience involved with the night?

We’ll make them aware that anything can happen and advise them to be open to whatever can happen.

Is this the first of its kind in Manchester?

There have been other nights similar to this one. Ones that have been one-offs or that have run on for a bit. But I don’t know of any that are running right now that are specifically variety nights. This is something we’re trying to run monthly. We’re aiming for every 3rd Monday of the month, so 16th April and 21st May so far.  I’d like it to become a regular thing. For the first one we’ve got a musical act, characters, sketches, improv and stand-up for example.

How did you make the contacts to create this? How would someone set up their own night?

The most important thing is getting a venue. We’re doing the variety night at Gulliver’s, which is free by the way. So just look for places that will offer stage space. We were lucky because we did the improv night there. They like us, we like them. Speak with other people who run nights, have run nights or want to run nights. With regards to getting acts, there are a lot of forums online. Facebook stuff. All I’ve done is post in these groups and said ‘We’re doing a thing, if you want to get involved, get in touch’.

How do people get involved?

They can get me on Facebook, but I am in the stage of re-building the website so eventually through there.

I didn’t know you could be taught to improvise

You can. I was taught. Once you understand the fundamentals it’s not that difficult. Then it’s just a case of practising. The reason I run the courses is because I want to get more of an improv scene going in Manchester. When I first came in it was just Comedy Sports. Now it’s us, a group called Thespianage, and a show called Murder Inc at the Ape and Apple. So the whole point of the course is to get more people into it and doing it. Then what happens is some of them will start their own nights, and if they’re getting more people in then there is a growing audience base for improv nights. We want to get as many people as possible into doing comedy. Soon we’re going to open up the website so people can write blogs, articles, stuff like that. Whatever they want.

Within reason. I’ve developed a page which describes the sort of stuff we want. As long as it’s comedy and not offensive, you’re good. There’s the shows and I’ve also written a number of sketches myself I’d love to get produced. And that’s the idea behind that. So if you’re trying to get into acting you can get some screen time. It’d be a portfolio for people to house their examples of work and help grow our and their audience.

What’s the end goal of it all?

The end goal is that I’d like a company that helps create opportunities for people who want to get into comedy. When I stopped doing stand-up, I realised that if you wanted to be a comedy actor or a scriptwriter you go through stand-up. That’s about it. There aren’t that many other avenues. It’s weirdly awkward to get into. Hopefully this is the start of something that helps to establish an alternative route.