Buckingham Palace has confirmed the death of Her Majesty Queen Elizabeth II and Manchester begins mourning together with the rest of the nation.

“Queen Elizabeth II has been the national figurehead for as long as most of us can remember,” said Cllr Bev Craig, Leader of Manchester City Council, “a symbol of continuity and stability through changing and sometimes turbulent times.

“We remember her visits to the city over the years, both on happy occasions such as when she opened the 2002 Commonwealth Games, and celebrated her Diamond Jubilee in 2012, and darker moments such as when she helped comfort young people injured in the 22 May 2017 terror attack at Manchester Arena.

“She served the nation with incredible dedication and dignity. On behalf of all Mancunians, we share the nation’s sorrow and extend our condolences to the Royal Family and the whole country.” 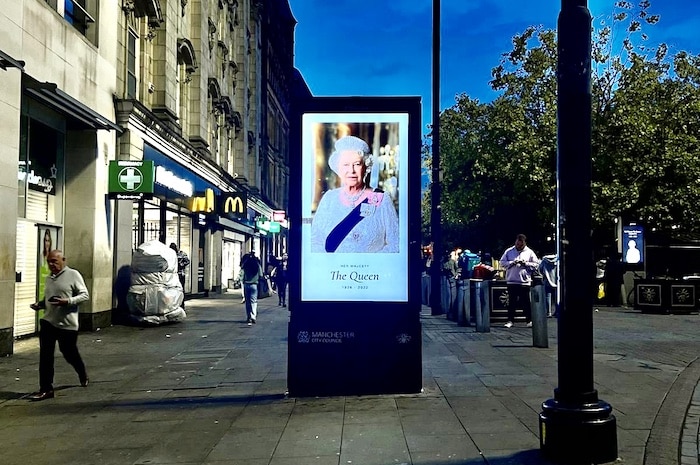 The city of Manchester will be observing the official 10-day mourning period, as late photos of Her Majesty are projected on billboards across the city.

More details will be added as the details are confirmed.

“The city of Manchester shares the nation’s sorrow at the passing of Her Majesty Queen Elizabeth II,” said Lord Mayor of Manchester Councillor Donna Ludford, “but also the sense of gratitude for her long reign and service to the nation.

“On behalf of all Mancunians, I send condolences to the Royal Family for their loss as we prepare to extend our support to the next monarch.”

The flag on Central Library has been lowered to half-mast as a mark of respect to the Her Majesty Queen Elizabeth II. The flag will remain in place up to 8am on the day after the State Funeral.

The Queen’s Books of Condolence

The Queen’s Books of Condolence will be opened tomorrow in Central Library.

The Books of Condolence will be open to visitors from 9am to 6pm from Monday to Sunday until the day following the funeral.

The National Book of Condolence, which will be kept by the Royal Household will be hosted at www.royal.uk/condolence

Information on the state funeral will be added to this page as soon as we have received confirmation of the details.

Residents may wish to lay flowers to mark Her Majesty’s death. You can lay flowers at St Ann’s Square.

We would ask anyone laying floral tributes to remove any plastic/cellophane wrappings and anything that is non-biodegradable. This will ensure that when collected, all of the flowers can be composted.