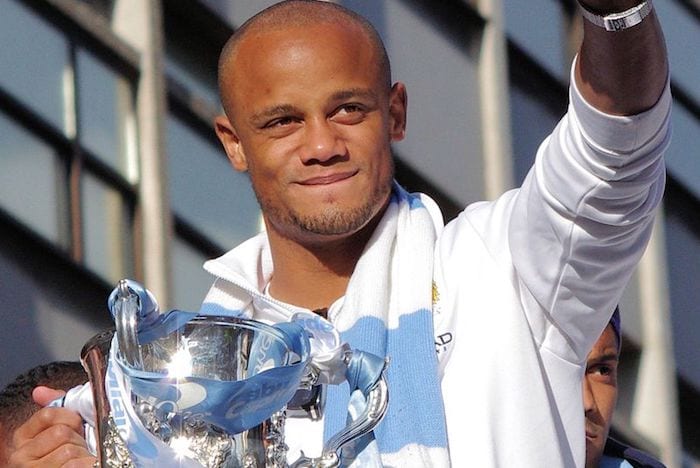 “Vincent Kompany where do you want your statue,” exclaimed Sky Sports pundit Gary Neville as the City skipper shocked the Etihad stadium with a thunderous strike to give the Blues all three points in yesterday’s must-win game against Leicester City.

Kompany recognised the importance of his contribution – his first ever goal from outside the box for the club he has been with for over ten years.

“It’s not about the amount of goals you score it’s about when you score them,” he said after the match. “Today it was necessary.”

Hearing that City had gone 1-0 up thanks to a 30-yard screamer, you could be forgiven for thinking it was Aguero, Sterling or one of the Silvas who had given City the lead. You’d have been wrong, though.

It was the unlikely Kompany, against the advice of his younger colleagues, who struck the decisive blow.

“Desire, belief. I haven’t scored this season but I always feel in big moments I can do something,” he said.

“Headers anything. I always feel I can do something. There was a little bit of frustration today. I could hear people saying don’t shoot. It annoyed me.

“I thought ‘I’ve not come this far in my career for young players to tell me not to shoot’.

“I’ve scored goals like that in training. It’s 15 years of top-level football of having top-level midfielders tell me to put the ball wide.”

My face screaming “NOOOO VINNY WHY U DO THIS” so hard 😂😂😂 what a hit boi !!! Captain Incredible 💙 @VincentKompany pic.twitter.com/Ba6WKyPdg3

Over the past few weeks, the Blues have been involved in a number of tensely fought games as they have constantly traded places at the top of the table with Liverpool with neither side slipping up so far.

City have been on the right end of those tight margins in each game – but Monday was extra special because of who provided that bit of magic.

Kompany has a history of scoring important goals in the title run-in. In 2012 Sergio Aguero wrote himself into City folklore with a last minute strike in the final game of the season to give City their first league title in over forty years. A terrific strike and one that snatched the title from fierce rivals Manchester United.

But it was a Vincent Kompany goal that kept City on the path to victory just a few games before – and it came against United. The Blues needed something special in that derby game to put the pressure on United. Kompany rising above everyone to head home from a corner was the difference that day.

Now as City chase their fourth Premier League title and look to become the first team to win back-to-back titles since United a decade ago, it is another local rival pushing us all the way in Liverpool.

The Merseyside outfit have also found themselves up against in recent games. Saturday’s crucial victory away at Newcastle put the pressure back on City and Kompany new it would take something special to beat an inspired Kasper Schmeichel.

Nothing is won just yet but history is on City’s side. The team leading on the final day of the season have prevailed on the seven occasions the title race has come down to the final game.

Both City and Liverpool have been phenomenal this season. Jurgen Klopp’s side have only lost one game and both sides have played some stunning football.

However it isn’t just the goal scorers who have been responsible for such a close title race. Monday night’s 1-0 victory also saw Ederson draw level with Liverpool’s Allison with 20 clean sheets this season.

The shutout against the Foxes means that if both men finish on 20 clean sheets each, the golden glove award will be split between them.

It is only the second time that two goalkeepers have kept 20 clean sheets in the same season – another example of just how far ahead of the opposition both teams have been this season.

Liverpool host Wolves and City travel to Brighton for the final game of the season. Whoever emerges victorious on Sunday, the 2018/19 season will go down as one of the greats in the history books.