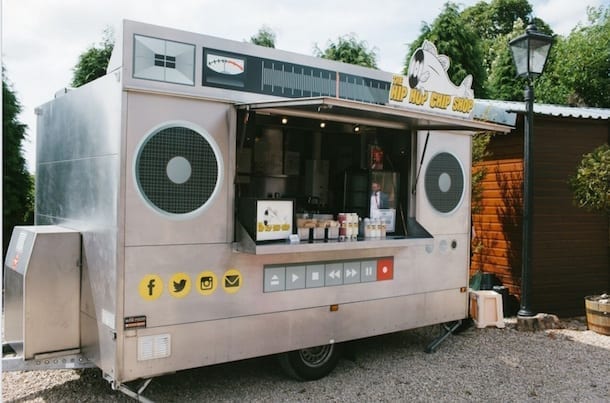 Alan Turing’s computer. The Industrial Revolution. The Hacienda. Just three of the wonderful things Manchester has given the world. Another thing to add to the list is hip hop-themed fish and chips.

The Hip Hop Chip Shop started out life a few years ago as a puntastic comedy website with spoof hip hop articles, and in the space of a few years have developed to an established restaurant and food retailer located in two sites, The Kitchens in Spinningfields and Media City.

“It’s a very proud moment when your business idea pays you, especially considering this business is just rhyming words that got out of hand. It’s no golden Lamborghini, but it keeps us alive and we love it and that’s the main thing” says founder Ozzie.

This heartening success story has taken a bit of a bitter twist after the arrival of a suspiciously named rival in London. Not sure how au fait you are with rap rules and regulations, but one of the central tenets is no biting someone else’s style. Not even when fish and chips are involved. It’s not that kind of biting. 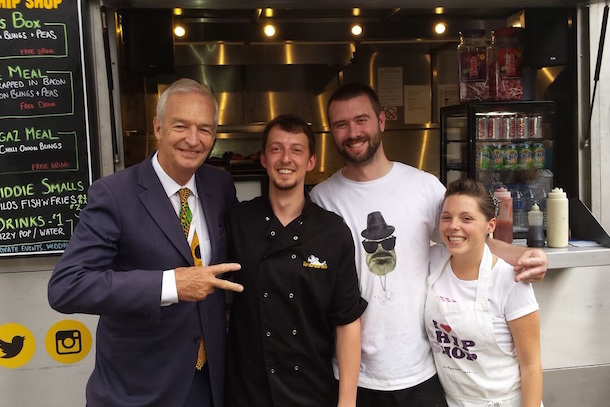 “They had also used a logo which is the same concept as a t-shirt design I did, implying they’re a ‘hip hop chip shop’. I just sent a few tweets their way and loads of people rallied around and supported us.

@thehiphopchippy lol don’t flatter yourself.. Never heard of u !! #hatersgonnahate

@thehiphopchippy wow u still going??? Get over it mate.. I wouldn’t compare the 2 logos if I were u .. The difference is huge!! Grow up..

“It might come across petty to some, but I’m proud of what we do and we’ve got an ambitious plans for expansion with the brand.”

“They’re infringing on our trademark. No doubt about it. I don’t believe that when they were conducting market research for their ‘hip hop chip shop’ they never used a popular search engine to look for the term ‘hip hop chip shop’.

“We have people ringing up, e-mailing and tweeting us to make bookings for them, and complaining about them. It’s a bit of a farce.”

Unofficial #Brixton branch. A table of 4 want to move time of a booking@ChipShopBXTN RT to reveal what time they’d like it moved to.

“Although we do occasionally indulge in a spot of Twitter beef with them – because that’s how you do a feud these days – we’re all about conducting business professionally with a good sense of humour. If you’re not having a laugh then it’s not worth doing.”

Despite the arrival of the Brixton imitators, the Hip Hop Chip Shop has continued to grow. There’s the Spinningfields site, a brilliant Boombox trailer they have been travelling around festival circuit in, and they’re popular with customers of restaurant delivery service, Deliveroo. They’ve also amassed a number of celebrity fans and customers including Peter Kay and Jon Snow. The news one, not the Game of Thrones one.

“We also partnered with Sarson’s – the vinegar guys – last year to showcase our Shell L Cool J spiced crab cake recipe. It was crazy to even think that we were on their radar. We’ve also been published in a cook book sold worldwide called Food Trucking: Recipes from the World’s Best Food Trucks.”

But for me, the best thing about them is their homemade gravy. Good God, their gravy. It’s the secret recipe of head chef Luke Stocks and it’s amazing.

One of my biggest bugbears about the North/South divide is the quite frankly abhorrent lack of gravy available in chip shops down south. Just goes to show, you can copy ideas, but you can’t copy delicious gravy.