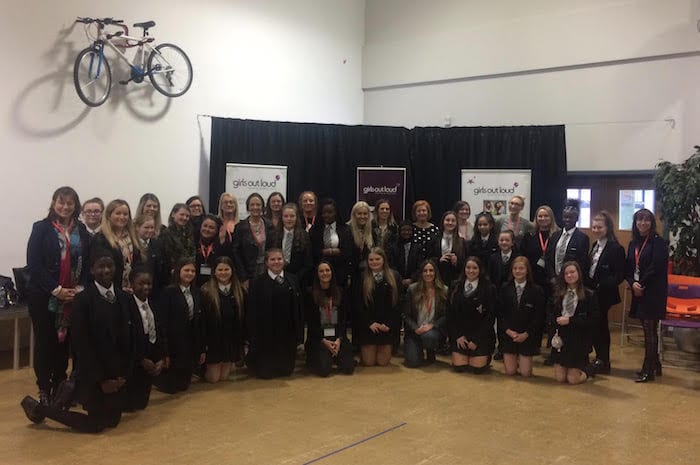 In a year which has seen the rise of the #MeToo women’s representation movement and the discussion of gender pay equality, the subject of female aspiration is more crucial than ever.

Suicides among teenage girls have risen by a third in the past year. One in four girls will self-harm before they leave school. Girls are now three times more likely to suffer from depression and anxiety than boys and on any given day up to 5% of girls aged 12 -17 will be prescribed anti-depressants.

Big Sister is a twelve-month programme at Albion Academy, Salford run by social enterprise Girls Out Loud which pairs up twenty teenage girls with a female role model who will mentor them over the year.

It’s like having an older sibling to guide you but without the arguments and fights.
â€œBeing a teenage girl, especially for this generation, is extremely tough,” said Girls Out Loud founder Jane Kenyon.

“The Big Sister programme really makes a difference to young girls, allowing them to engage with a smart and successful woman who has been there and got the t-shirt. Their relationship is rich and non-judgemental, and this makes all the difference. The team at Albion really get this and we share a passion to empower girls and to help them find their voice.”

The Big Sisters are high flying women who have achieved in the area with roles in organisations including the University of Manchester, Slater and Gordon LLP and Pladis Global.

This is the sixteenth Big Sister programme that Girls Out Loud has run in the north west and the third year Albion Academy has participated in the hugely successful project.

A long-time supporter of Girls Out Loud is DJ and Key 103 presenter Hattie Pearson.

“Having done the mentoring programme now for three years, I know that this is just the start of some wonderful friendships forming over the coming months,” says Hattie.

“The programme can be a lifeline for young girls who feel they have nobody to talk to. By the end of the programme, they have often found their voice and have learned invaluable lessons in resilience and confidence from their Big Sisters.”

The chosen pupils of Albion Academy were given the chance to meet their mentors for the first time recently and begin the process of getting to know one another.

Each Little Sister was presented with a goodie bag filled with gifts from the Big Sisters, as well as a Make Herstory slogan t-shirt from Missguided, who launched a fashion line in collaboration with Girls Out Loud earlier this month in aid of International Women’s Day.