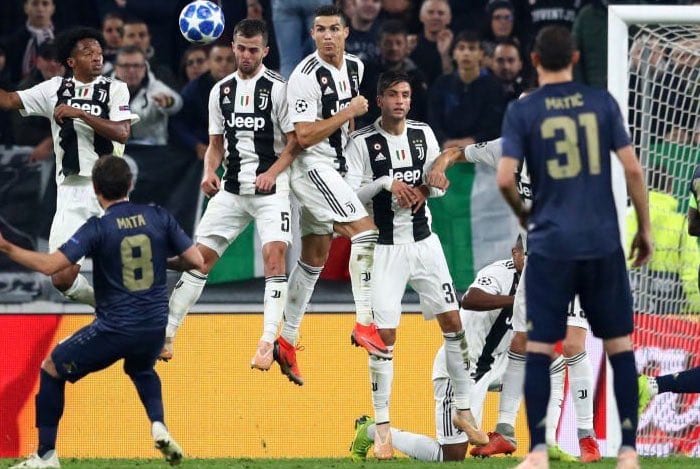 Whisper it quietly, but things are starting to look up for United this season. Where once the manager was thought to be a couple of games away from the sack, he now has a team that is playing for him and was last night afforded a rare opportunity to celebrate in true Mourinho-style.

First let’s put the Juventus result into context. It was by no means on the same scale as the heroics in 99, or the Giggs-inspired win last time in Turin.

Yes that famous semi-final win in 99 saw us come from behind to triumph, but it was an outing where we showed our midfield strength and attacking verve.

Last night’s result saw us hang on at times and never really trouble their goal until the 86th minute.

However, it was a still a sweet win – and one that could truly galvanise this team. So, let’s look at some positives.

The defence played well. Victor Lindelöf is starting to justify his price tag with some solid displays and coped well with Ronaldo on the night. Paired with a decent January addition, he could become a good buy for us.

The movement up front was good. Jesse Lingard excelled in the first half and Anthony Martial continued his rich vein of form. Alexis Sanchez through the middle is looking a much more mobile option than Romelu Lukaku, while the Chilean seems to have re-discovered his tenacity and bite.

Ander Herrera looked to have shored up the midfield and will certainly be in the starting line-up for the trip to City at the weekend. Nemanja Matic appeared more assured with the Spaniard next to him and this should free up Paul Pogba to affect the game – something that he unfortunately struggled to do against Juve.

Most importantly for the manager, the team seem to be following his instructions – unlike in the first half against Bournemouth recently – and they’re playing for him. This is clearly evident in the way they’ve been coming from behind from losing positions recently.

Mourinho also seems to be getting his substitutions right and making a difference when it matters. Juan Mata and Marouane Fellaini were clearly exactly what we needed at the right time.

Things are definitely looking up. But they also couldn’t be better over the other side of the city, with City having hit six twice in their last two games. It doesn’t look like a good time to visit the Etihad but with derbies the form book can go out the window.

He’ll need to get this starting XI right and hope that his team can start in a similar vein to Wednesday night and not how they did recently against Bournemouth, Chelsea and Newcastle.

This will be a huge test of Lindelöf’s recent upturn in form and will definitely be a game for Herrera’s blend of destruction and annoyance.

Unfortunately for United, to get a result at the Etihad, hanging in there and nicking a couple of goals isn’t likely to happen twice in a week. We’ll need to play too. That means that much rests on Pogba, Sanchez and Martial. Sanchez seemed to get a knock against Juve but should be fit hopefully, while Martial could give Kyle Walker his toughest test of the season.

Who knows which Pogba will turn up.We’ve seen him do it in derbies before, but we can’t rely on him to drive us forward on Sunday.

United will no doubt be going into this one on a high and with the confidence that they can get a result in a pressurised atmosphere against a top team. But if they are to win at the weekend it will require a managerial masterclass from Mourinho. If he really is starting to get his mojo back, then this is surely the acid test.