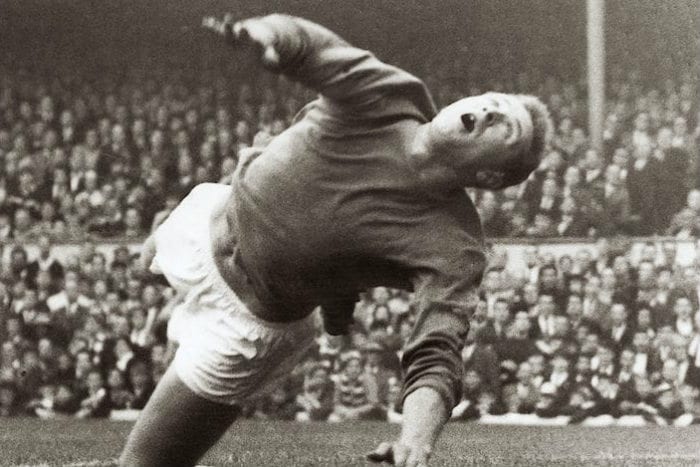 Football across the generations today paid tribute to former Manchester United goalkeeper and “hero of Munich” Harry Gregg, who has died aged 87.

Gregg, who was capped 25 times for Northern Ireland and made 247 appearances for the Reds, was one of the legendary Busby Babes and survived the Munich air disaster.

It was amid the blazing wreckage of BEA flight 609 on the snowy tarmac of Munich airport on 6th February, 1958 that Gregg earned his hero status, though he was always reluctant to accept the accolade.

The Airspeed Ambassador crashed on take-off with 38 passengers on board and Gregg, one of 21 survivors, twice returned to the burning fuselage to help team-mates Bobby Charlton and Dennis Viollet to safety.

He also rescued a 20-month old baby and her injured pregnant mother from the wreck.

It is with deepest sadness that we have learned of the passing of former player Harry Gregg OBE. The thoughts and prayers of everyone at the club go out to Harry’s family and friends. pic.twitter.com/5kjlpn5Wqm

The traumatic memories stayed with him. On the 60th anniversary of the disaster he told the Daily Mail: “If I close my eyes I can still recall every detail of what happened that day in Germany. My God I wish I couldn’t.

“But I remember where everyone was sitting and what many of the boys said before we tried to take off in the snow for the third time.

“Over the years I have had some troubles dealing with it. Survivor’s guilt is what they call it, I believe.”

He was 18 when he arrived in England to join Doncaster Rovers and when Manchester United came for his signature in 1957, the £23,000 fee was a record for a goalkeeper at that time.

Despite being rated one of the best keepers ever to play for United – he was named best goalkeeper at the 1958 World Cup while playing for Northern Ireland – Gregg never won a medal.

He played in the 1958 FA Cup final, notoriously being barged with the ball into the back of the net for the second of Nat Lofthouse’s goals in Bolton Wanderers’ 2-0 win.

Injury cost in a place in United’s 1963 Wembley victory and he played too few games in the Reds’ 1964-65 First Division Championship win.

When United won the league again in 1966-67, Gregg had been sold half way through the season to Stoke City. His career as a manager started at Shrewsbury Town in 1968 and ended in 1987 when he failed to prevent Carlisle United from being relegated to the Fourth Division.

It is with great sorrow that we inform of the death of Manchester United and Northern Ireland legend Harry Gregg, OBE,
Harry passed away peacefully in hospital surrounded by his loving

Never to be forgotten!

His passing was announced by the Harry Gregg Foundation – a local charity in Colraine – on its facebook page this morning.

The statement said: “It is with great sorrow we inform of the death of Manchester United and Northern Ireland legend Harry Gregg OBE. Harry passed away peacefully in hospital surrounded by his loving family.”

Tributes were led by Rio Ferdinand, who tweeted: “Huge part of the club’s history, never to be forgotten. Thank you”.

Gary Neville also tweeted a tribute, and Manchester United posted: “It is with deepest sadness that we have learned of the passing of former player Harry Gregg OBE. The thoughts and prayers of everyone at the club go out to Harry’s family and friends.”

Gregg leaves behind five children. His death leaves Sir Bobby Charlton as the only player to survive the Munich air disaster still living.