HAIR The Musical: the sixties relived at Hope Mill Theatre

Psychologists and neuroscientists have long confirmed that the music we loved as teenagers holds a disproportionate power over our emotions. Songs we obsessed over during the high drama of adolescence evoke a nostalgia that stays with us throughout our adult years.

During my punk years in the mid-1980s, I had a bit of an obsession with Sid and Nancy – especially Nancy Spungen who I wanted to be just like – devouring any little titbit from her past and making it my own. When she was growing up, she had loved the musical Hair. I dutifully bought my own copy of the vinyl (which I still play today) and my neural musical bind began right there.

When I interviewed Will Whelton and Joe Houston at Hope Mill Theatre last month, they invited me along to their production of HAIR The Musical. I’d only ever played my record and watched the film version, so to say I was really looking forward to it a bit of an understatement.

We arrived at the packed theatre to an announcement that they had been burgled only that morning and that vital equipment needed for the performance had been stolen. As a result, the start was slightly delayed but the show must go on, and indeed it did, showing what true professionals they are. 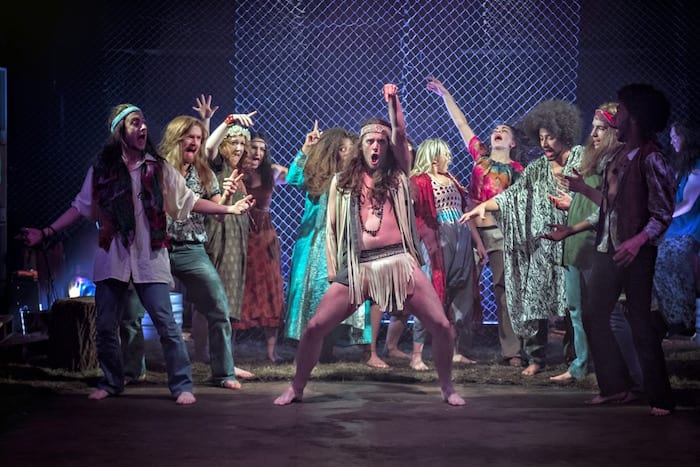 This was my first visit to see a show here and I hadn’t realised how intimate it is. Set in New York in 1967, HAIR is the story of a group of hippies who celebrate peace and love in the shadow of the Vietnam War.

The story is about their lives, peace rallies, relationships within the tribe, and how they are perceived by more upstanding members of the community – brilliantly depicted by a comical old lady (rather ingeniously played by a man).

It’s the story of Claude and his struggle of to decide whether to succumb to the pressures of his parents and conservative America or to be more like Berger fighting against conscription into the Vietnam War. The outcome is very emotional and it’s as relevant today as when it was first released on Broadway in 1968. 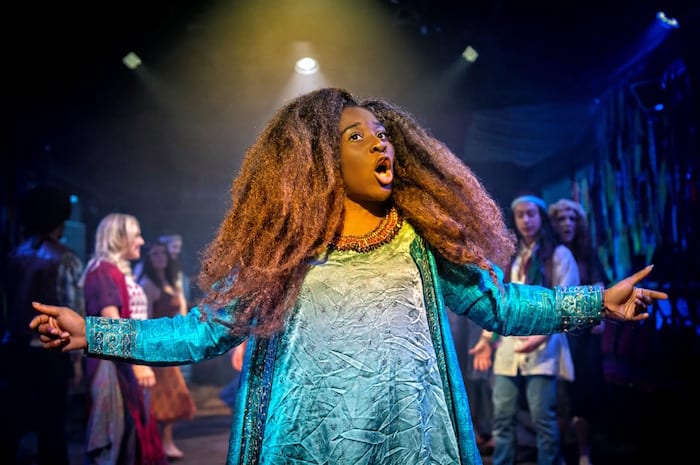 What is evident from the start is the calibre of the cast, perfectly portraying the story of their bohemian tribe, their sexual energy and drug use as we are introduced to each individual.

I was worried the music wouldn’t live up to the original score by Galt MacDermot I had only heard on my crackly record but I had nothing to worry about. Each song was perfectly executed, often staying true to the original.

The cast’s vocal talents are unbelievably good and song after song was delivered with hard hitting emotion and power.  I couldn’t help joining in as I was transported back to my bedroom in 1985 but as my vocal talents aren’t quite as good as the cast I probably annoyed my neighbours.

Will’s choreography deserves a special mention as this really was theatre in the round with  the members of the cast playing their parts perfectly to the surrounding audience. The infamous nude scene at the close of the first act when the performers leave the stage and the lights go down was very tastefully done and not too uncomfortable for those of us on the front row.