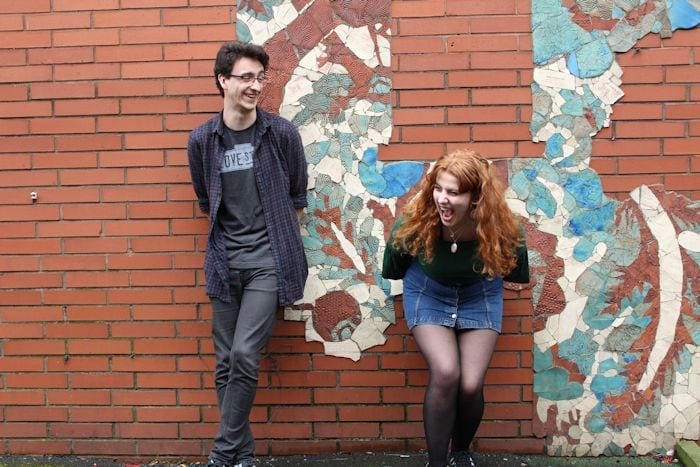 You’d expect the youngest theatre company performing at this year’s Greater Manchester Fringe festival to be doing something political. Something about Brexit or Jeremy Corbyn, perhaps. But they’re not.

Lowhurst Productions, a not-for-profit theatre company which nurtures young actors aged 17-22, will be performing Much Ado About Nothing, the Shakespeare classic about love, hatred, betrayal, friendship and revenge.

It’s a production for the social media age, with Shakespeare’s iconic characters finding themselves making decisions that could cost them everything in a post-feminist, Tinder-friendly world.

How did you get into acting and directing?

In school, I simply caught the bug. I got on stage and I knew there was no going back and after having the privilege of working on a few professional shows, I got excited by the concept of directing and thought – if they could do it, why not me?

When did the production company start?

When you get the bug you want to become the best. You want to train. So naturally, the next step would be to go to drama school.

However, accredited drama schools are actually harder to get into than Oxbridge and I found myself with a rude awakening at age 18 when I hadn’t gotten into drama school and the safety net of A Level Drama would soon cease as I was leaving college.

I’ve always been a Shakespeare nerd and I was desperate to do a Shakespeare show but a lot of amateur dramatic places didn’t do them or had cast their season. I talked to my friend Jack Stewart who had gotten into the Royal Welsh College of Music and Drama to study on their Stage Management and Technical Theatre course and I told him that I wanted to start a non-for-profit theatre company and do Shakespeare.

He was crazy enough to help me and be co-artistic director and our mad idea worked as our underground, intimate production of Twelfth Night sold out at the Manchester Fringe Festival! Jack’s been off at drama school and I’ve been programming and producing ever since.

How many productions have you put on?

We’ve done Twelfth Night at the Manchester Fringe Festival in 2016 which has proven that just because it’s youth theatre, does not mean that it won’t be of a professional standard.

We sold out our run to a very pleased audience and have been working on Much Ado About Nothing ever since to make it the best possible production it can possibly be. Alongside the show, we have a short film in pre-production so we’re definitely branching out. The show is bigger in terms of theatre, size of cast and scale and we’re developing from theatre to film.

How are they funded?

We work as a non-for-profit business. We did Twelfth Night on a shoestring budget and luckily the profit from ticket sales from that enabled us to do Much Ado About Nothing. We’ll carry on for as long as we have the money to do so!

What’s the most embarrassing that has happened during a performance?

In our preview for Twelfth Night to test out the show on an audience at our college, we skipped an entire scene. Also, during our run at the Kings Arms Vaults for the show, as we were underground we had the pipes from the building directly above us and so every time someone went to the toilet we heard about it!

Miraculously, it actually gave the show more of an edge and happened at the best possible moments. Very serendipitous.

Why Shakespeare? And why Much Ado?

There’s a reason why Shakespeare is the most produced playwright of all time. It’s because his writing and his characters resonate with us. He creates complex, stupid, beautiful and flawed characters that you look at and say “I may not 100% get the language – but that is so me!”

In a recent rehearsal with Rose Walker who plays Margaret, she sat down and said “The show just reminds me so much of Love Island!” Two million people tune in to watch Love Island on ITV2 nightly, myself being one of the hooked viewers, and I realised it did remind me of Much Ado!

Love Island and Much Ado both are boy-meets-girl stories at the core of it which is then filled in by weird and wonderful friendships and a few villains that you love to hate!

Our production is modern and follows the dynamics of online dating, lad culture and partying. The parallels between the villa and Messina are uncanny.

For a long while, Much Ado About Nothing was the only Shakespeare play I really liked because it followed the romcom format that I grew up with and it was the only play that I saw my life and thought, “That’s so exciting!”

Tell us about the production

The show is abridged down to an hour, so long enough to get all of the true story and all of the beloved laughs in and short enough that you won’t get bored and for your bum not to get numb.

The show is fast paced, dynamic and doesn’t stop. And this is how we’ve approached the production.

Our millennial, social media age doesn’t stop – we’re always tweeting and talking and instagramming so why should the show stop when that’s the culture that we live in?

The story starts with the movement of soldiers, the movement of a relationship on Tinder and eventually into a movement of dance to Ed Sheeran’s Don’t (choreographed by Ellie Ledwith who’s training to be a RAD teacher) when the characters truly meet each other, ironically whilst drunk.

So if you want to see Shakespeare’s iconic Benedick sing badly to Don’t Look Back In Anger, this is going to be the place to go.