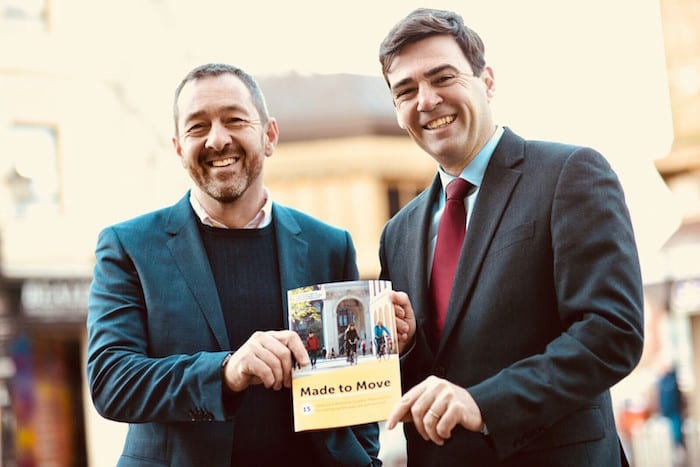 Greater Manchester’s first Cycling and Walking Commissioner – former Olympic champion Chris Boardman – has called for £1.5 billion to help realise his vision of transforming the city region into a world class region for cycling and walking.

When he was appointed in the summer, Mr Boardman was tasked by Mayor of Greater Manchester Andy Burnham to produce a report on how to deliver a step change in the numbers of people walking and cycling.

The report, Made to Move, features ambitious targets to improve cycling and walking rates in a bid to improve air quality – a key part of the mayor’s green city agenda – as well as tackling congestion and improving public health and wellbeing.

Improving the health and wellbeing of the people of Greater Manchester is at the heart of Made to Move.

Air quality is now recognised as one of the most important challenges facing the region, with pollution caused mainly by road traffic linked to up to 2,000 premature deaths each year.

As the easiest and cheapest zero-emission means of transport, encouraging more cycling and walking are two of the key ways to help clean up the air, alongside the significant health benefits of increased physical activity and exercise.

The 15-point plan includes proposals for a detailed 2018 Greater Manchester-wide walking and cycling infrastructure plan and the establishment of a ring-fenced, 10-year, £1.5 billion fund to bring Greater Manchester’s spend on cycling and walking in line with other major conurbations such as London and Oslo.

Mr Boardman’s proposals build on research that suggests a significant majority of Greater Manchester residents (77%) are in favour of more protected cycle lanes – even if it impacts on other forms of road traffic.

“There’s no doubt that this is an incredibly ambitious but wholly deliverable plan to get Greater Manchester moving by bike and walking,” said Mr Boardman.

“My proposals, the product of many months of work, will ease congestion on our overcrowded roads, improve our general health and wellbeing and help us breathe cleaner air in a greener city-region. It will require significant support but the decades of improved living that we, our children and grandchildren will be able enjoy will make it worthwhile.”

At the launch of Mr Boardman’s plan he said: “Chris has identified the need for substantial investment in our cycling infrastructure and in response, we are aiming to create a challenge fund of around £50 million a year from 2019 to 2021, which can be accessed by our 10 districts if they are building to the required standard and meeting part of the costs.

“This will go a considerable way towards meeting the required funding challenge and we will provide initial funding next year to get things going. Investing in cycling and walking will not only improve the air that we breathe, it will help tackle our crippling congestion problem and improve our health, wellbeing and environment.”