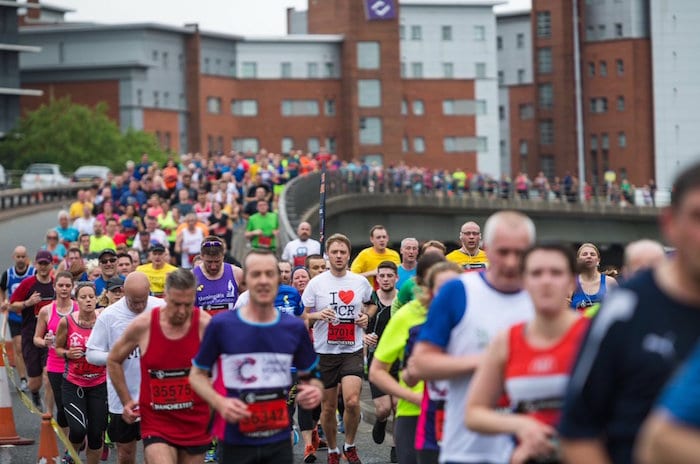 Last week, the organisers of this year’s Great Manchester Run, the biggest 10k event in Europe, would go ahead, despite security concerns following the Arena bomb attack.

What nobody knew until yesterday was how many people would turn up.

There really shouldn’t have been any doubt. 40,000 did, raising money for good causes, with thousands more cheering them on in a massive show of solidarity and civic pride.

The hashtag #RunForManchester had been trending for hours on social media and was plastered on banners across the city.

Runners and spectators showed their pride in their city, wearing yellow ribbons, worker bees and the I Love MCR icon.

Whether running it, watching it, or working it, here's to the #greatmanchesterrun and our chance to show the resolve of this great city pic.twitter.com/DNrjtrKDwr

The weather was perfect. It wasn’t as hot as it had been all week and, even more surprisingly, it didn’t chuck it down all day as it usually does on bank holidays in Manchester.

Emotions ran high as a minute’s silence was held at the start line on Portland Street. There was a performance of the uplifting verse Do Something by local poet Tony Walsh. “Do something to show them what you’re made of. Do something you’ve never done before.” The people of Manchester did.

It smelt like Manc spirit. Plenty of perspiration and even more inspiration.

There was plenty of motivation along the way including DJs, live bands and the Boon Army stage at the half-way point, featuring local legend Clint Boon of The Inspiral Carpets. The finishing line featured a brass band playing an emotional version of Don’t Look Back in Anger.

What an incredible atmosphere here at the finish line 🐝❤️🎗#RunForManchester pic.twitter.com/iLQRvwS36E

There were 40,000 winners but the biggest winner was Manchester.

For the last seven days, the eyes of the world have been on Manchester. Yesterday was another manifestation of the extraordinary community spirit and solidarity in the face of terror which has made the city stand out worldwide.

We bang on about how great Manchester is all the time. Now the world has proof.