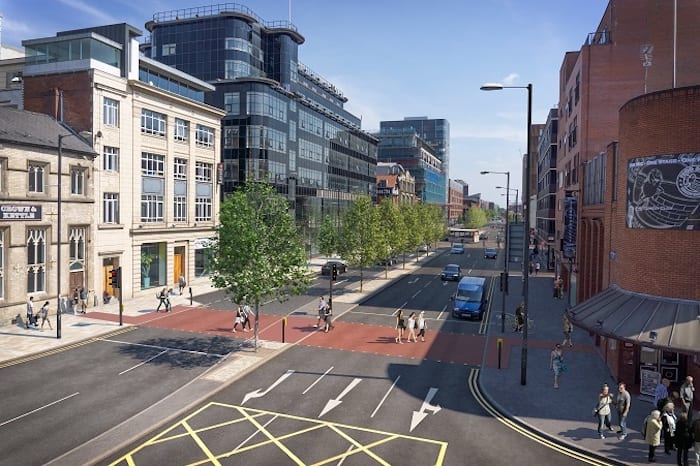 One of Manchester city centre’s busiest roads – Great Ancoats Street – is set for a major facelift, and work is starting this month.

The council has revealed plans to turn what revolutionary Friedrich Engels described as home to “ruinous rows of back-to-back” 19th century houses into a tree-lined boulevard.

As Ancoats itself has transformed from a grim mix of slums and derelict mills to desirable 21st century urban village, improvements to the main thoroughfare are aimed at helping the area to reach its maximum potential.

Great Ancoats Street – formerly Ancoats Lane – is steeped in history, having once been the location of the Mosley family’s Ancoats Old Hall dating from 1609 and its 1820s replacement new hall, finally demolished in the 1960s.

It was also the home of the Manchester offices of the Daily Express in its heyday. The city’s youngest Grade II listed building now houses apartments and offices.

The street is a key part of the Manchester and Salford Inner Relief Route around the city centre and one of the main routes in and out of Manchester to the north via the A62 Oldham Road.

With an average of 37,200 journeys on a typical weekday, it’s a well-used and vital route. The pedestrian crossings are also heavily used, with over 15,000 crossings made in 12 hours.

The improvement work will start from Oldham Road at the junction of Marshall Street/Cornell Street, along Great Ancoats Street to the Metrolink stop on Pollard Street.

A town hall spokesman said: “In recent years, the surrounding areas of the Northern Quarter and Ancoats/New Islington have undergone major transformations. As the city centre is expanding, Great Ancoats Street is not benefiting from the same exciting developments to housing and businesses as its neighbours. There are also a high number of road accidents along the route.

“The area is a prime location for residential and commercial development opportunities, and a plan of work has been put together to help the area realise its potential.”

Additional fit-for-purpose crossings will be installed along the route, making travelling by foot or bicycle from the city centre to the surrounding neighbourhoods easier and safer.

Resurfacing of the road with new, modern materials will reduce the noise from motor traffic by 40 per cent.

Landscaping of the area to make the route more attractive will include planting more than seventy trees, laying new pavements, improving street furniture, and making signage clearer and simpler to understand. The changes will make the area a natural extension of the city centre.

The work is a key part in increase economic growth in and around the city centre where employment is predicted to grow and many people will need homes near their place of work.

These improvements will also mean that the neighbourhoods around Great Ancoats Street are attractive to housing developers.

Cabling and piping installations for utilities and telecoms companies will take place beneath the road and footway surfaces starting this month and continuing into November in a bid to ensure that the work has the lowest impact possible on traffic flow.

The main part of the work will start in January 2020 to make sure there’s no impact during the busy Christmas period.

The council has promised it will work to ensure that disruption is kept to a minimum, but some disruption seems inevitable on such a busy route.