Over the past couple of months we have been seeking out the best food pubs our region has to offer, compiling our very own Good Grub Pub Guide, in the hope of getting you lot out of town to pastures greener.

Pubs have always been a part of British culture, but over the last few years they’ve had to up their game to beat the competition and to keep customers coming in. Increasingly, it’s the food that brings people in and these ‘locals’ have become destination venues in their own right.

For our final instalment, we are visiting Mobberley near Knutsford.

It’s an affluent and much sought-after area of Cheshire with expensive property, WAGs, golf-courses and four by fours by the truckload. We actually ended up here by default, as the pub we had planned to visit was closed for a wedding. Maybe it was for an episode of The Real Housewives of Cheshire.

Another huge part of British culture is football. Which brings us nicely to our pub today.

The Bull’s Head is most famous as the birthplace of UMBRO – or rather Harold Charles Humphrey and brother Wallace, who began their little sportswear company Humphrey Brothers Ltd (shortened to UMBRO on all merchandise) in a cupboard from this very site where their parents ran what was then a hotel.

They’ve supplied some of United’s classic kits, including the ones they wore in the 1999 treble-winning season. The red and white kit worn by England in their 1966 World Cup triumph over West Germany was also made by Umbro. Maybe if they were wearing Umbro this year too we’d have a better chance of winning the World Cup in Russia. 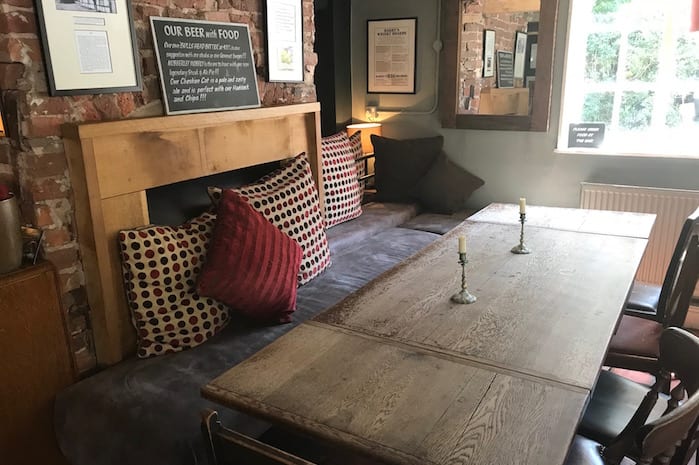 The pub’s current owners, Cheshire Cat Pubs and Bars, own a number of establishments in the area, but there’s no whiff of a chain. Each retains its own independent identity.

This place is a quirky little number, eclectic and warm, with one of the largest beer gardens I’ve seen. And across the road is The Roebuck Inn, also owned by the same group. It’s easy to see how they were named best pub group in the 2017 Good Pub Guide. 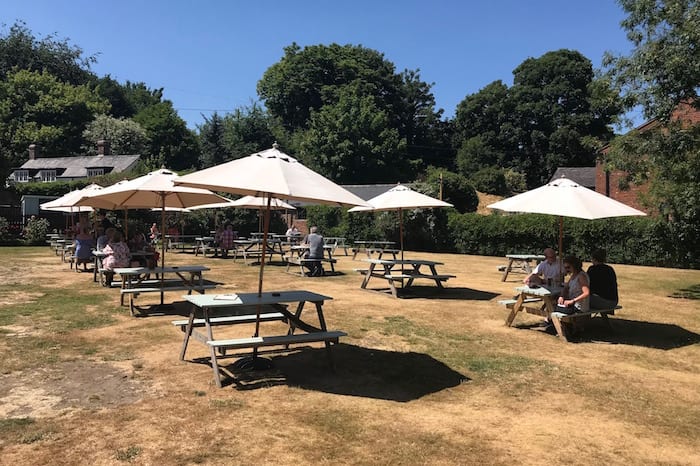 The menus display all the character and attention to detail on show throughout the pub, with sections like Nibble & Natter, Share & Chatter, and Bullish Favourites.

There are Cheshire cask ales, all selected from breweries within a 30 mile radius, over 80 whiskies (they regularly hold whisky tasting classes), and a large selection of wines served by the glass. There’s even dog nibbles on the bar for your four-legged friends. 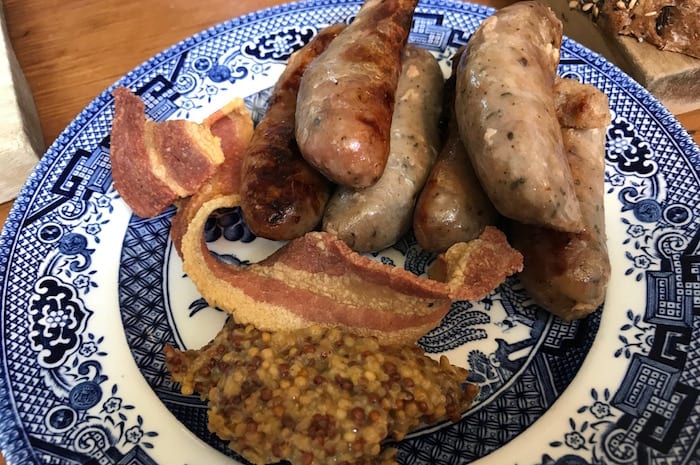 Who is Frank? Why is he famous? I thought these would be like fresh pork scratching nibbles. They are actually mini sausages, but fair at that. With some rather tasty crispy bacon. I love a good savoury snack and these were fabulous. 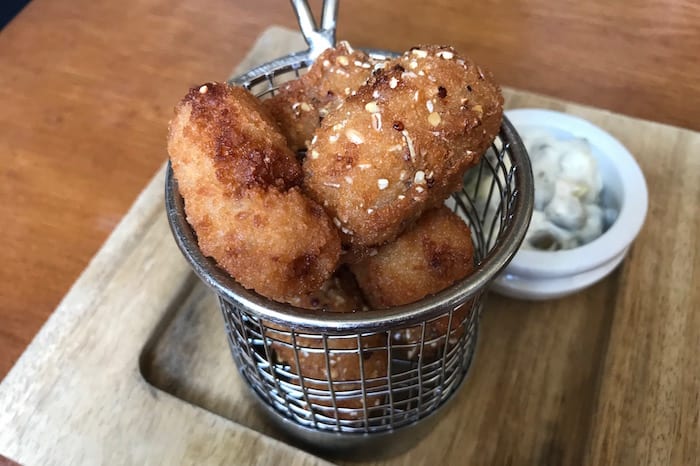 Little Scampi ‘in the basket’ with homemade tartare sauce £5.95

I can’t believe I’m saying this, but these were the highlight of our visit. Simply the juiciest scampi-in-a-basket I’ve eaten. Normally from Scotland, this week from Whitby, apparently. Top notch chunky tartare sauce. 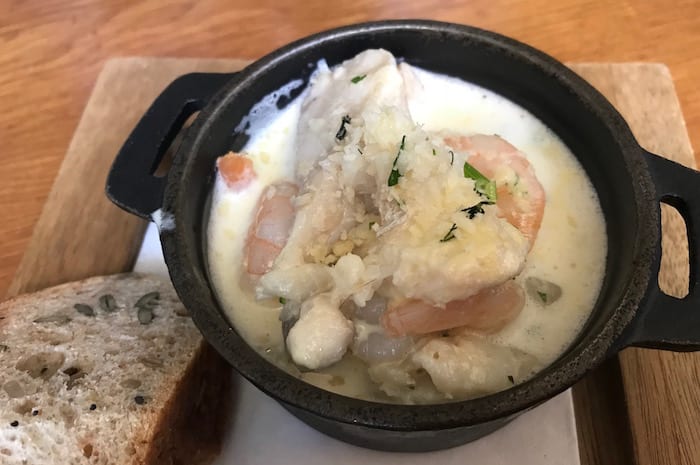 Again, more fantastic seafood. It didn’t look the most appealing on arrival, a bit grey and un-exciting. But tastewise, everything was spot on. Lovely produce and not overcooked, plump and moreish in that white sauce. A little light on the dill, though. I’m Polish, remember. 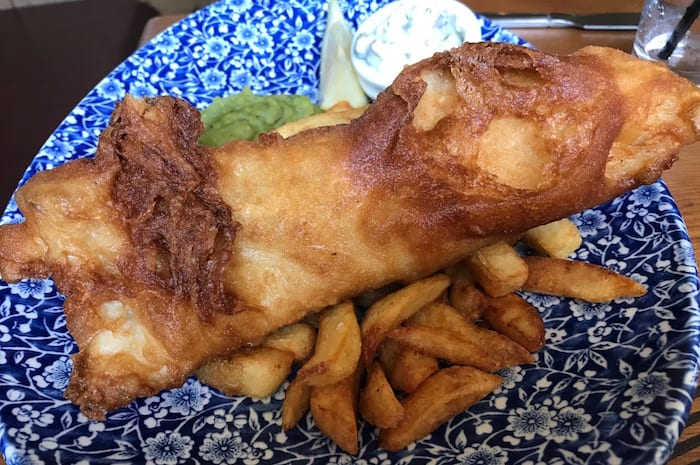 Great example of our national dish. Well, the haddock anyway. Beautifully battered and yet again very good fresh fish. The chips, on the other hand, were a bit limp and could have been crispier and fluffier. The peas were just OK.

I drank a glass of The Rambler Chenin Blanc (£4.60 for 175ml glass) which was a quaffable house white, and my partner in crime (daughter on an authorised day off from school) had to make do with fruit juice as they had no hot chocolate. She’s never going back. 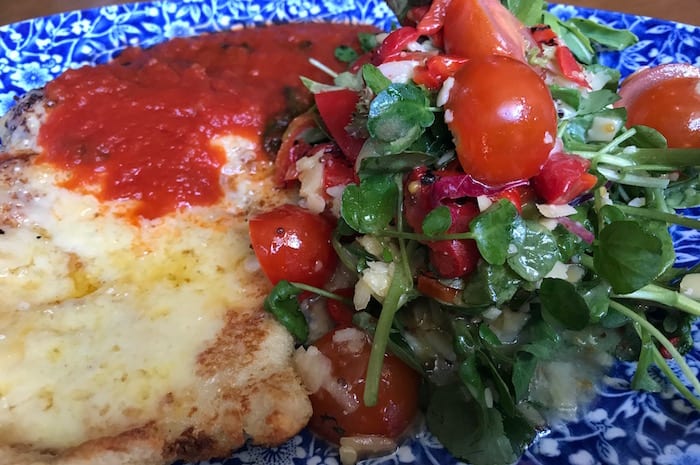 What the…? I hadn’t properly read the menu when I ordered this. The chicken itself was nicely crumbed and quite moist, but totally killed by the strong Winchester cheese. The sauce was too tart, and the salad, unfortunately, overdressed. Not the finest main course.

We couldn’t manage desserts in the hot weather – plus there’s all those skinny WAGs to contend with – so we made do with another drink in the garden.

Service was fun and friendly and everything you’d want from a pub. In fact we thoroughly enjoyed our visit considering we hadn’t planned to be here at all.

I say embrace the unexpected, like the smashing fish and seafood at this pub, and like England winning the World Cup again. You never know, it just might happen. Even without the Umbro kit.