Iconic painting ‘Going to the Match’ purchased by The Lowry for record-breaking £7.8m 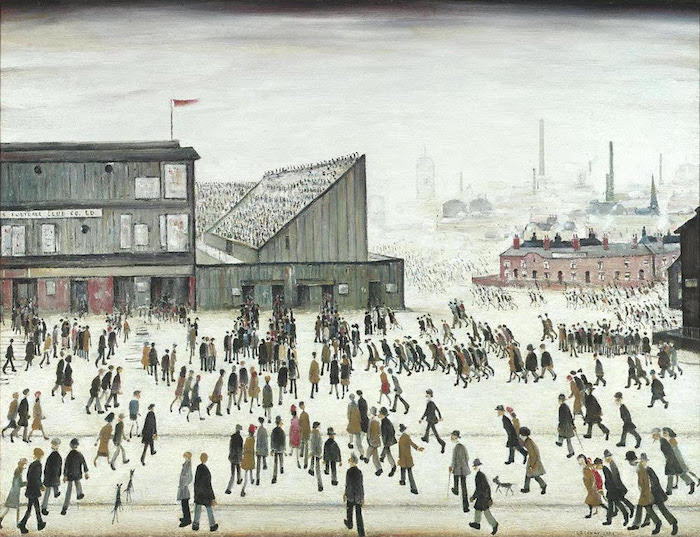 Yesterday evening a delegation from The Lowry attended the Modern British & Irish Art Sale at Christie’s in London, where they successfully bid to buy and keep LS Lowry’s ‘Going to the Match’.

The iconic painting cost a record breaking £7.8 million, the highest ever paid for a Lowry.

The purchase was made possible thanks to the generous support of The Law Family Charitable Foundation.

The iconic painting has been on display at The Lowry since 2000, on loan from the PFA (Professional Footballers Association).

Painted in 1953, it depicts burgeoning crowds outside Burnden Park, the former home of Bolton Wanderers.

It was close to Lowry’s former home in Pendlebury, although the artist was a long-suffering supporter of Manchester City.

The painting was being sold to raise money for the professional footballers’ charitable foundation, who have had to sell it because of the financial crisis.

It was last sold in 1999, when the Professional Footballers Association (PFA), the union for current and former players, paid £1.9m.

At the time, Gordon Taylor, then chief executive of the PFA said it was “quite simply the finest football painting ever.”

It would be the PFA’s “prized possession”, he added.

Following the decision by the PFA to sell Going to the Match, there were no guarantees that any future owners would share the commitment to keeping the work on public view and free to access.

Retaining the painting at the Lowry is a huge coup for the city.

Julia Fawcett OBE, CEO of The Lowry, said:“We firmly believe that this iconic artwork must remain on public view, so it can continue to be seen by the broadest possible audiences, for free.

“This evening, thanks to an incredibly generous gift from The Law Family Charitable Foundation, we are delighted to have purchased the painting for the city’s collection of LS Lowry works.

“We look forward to bringing it home to Salford, where it can continue to delight and attract visitors to the Andrew and Zoë Law galleries at The Lowry.

“A great deal of work has been needed to make this intervention possible – I’d like to thank Andrew and Zoë Law, our Chair Sir Rod Aldridge, Salford’s City Mayor Paul Dennett and our Trustees for all of their support”

Andrew Law, who founded The Law Family Charitable Foundation with his wife Zoe, and has donated to the Lowry over the years, said the couple were “delighted” to have facilitated the purchase.

He added: “This LS Lowry painting belongs in Salford on public view, close to his birthplace, where he was educated and where he lived.”

Lowry, who died in 1976, spent much of his life in Salford and his work is strongly associated with the city.

Paul Dennett, Salford’s City Mayor, said: “LS Lowry, Salford’s greatest and most iconic artist, made his name depicting working-class life – as such we emphatically believed Going to the Match should remain on public view free to access where everyone can see it.

“I am delighted our campaign to save this critical and important painting has successfully resulted in The Lowry securing it  tonight, for the city of Salford in perpetuity for generations to come, for residents and visitors to our great City.”