Getting more women on their bikes in Greater Manchester 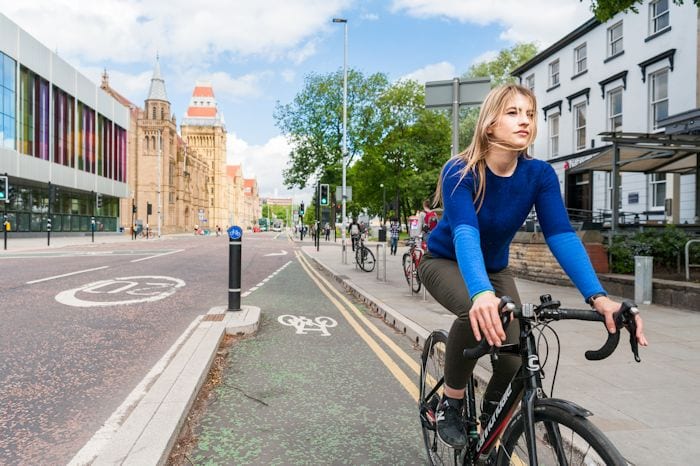 The benefits of cycling far outweigh the drawbacks. It’s good for you and good for the environment. And it saves you money, too. Just three reasons why more people are cycling.

According to a survey conducted by Sustrans last year, 69% of Greater Manchester residents think it would be a better place to live and work if more people cycled.

The survey also found that twice as many men cycle as women. So why don’t more women cycle?

Safety is the number one concern for men and women. More people would cycle if on-road cycle routes were completely separated from vehicles by a kerb or bollards, even if this means less space for other traffic.

But there are lots of other reasons why more women don’t cycle.

A straw poll in our office suggests some are put off cycling by the fear of intimidation or harassment by motorists, whilst others who enjoy cycling as a leisure activity wouldn’t dream of cycling to work because of concerns about their appearance.

It could also be down to a lack of role models, according to Dean Hill, clubhouse manager at Rapha.

“You don’t see a lot of people like Laura Kenny on TV,” says Dean. “They’re not as highlighted as male athletes, I think, which is something we as a brand are trying to change.”

“They could think ‘how do I go out on my bike, maybe I don’t know how to fix a puncture, so maybe it’s best I don’t go out on my own.’”

Keen cyclist Nadia Kerr will talk more about these and other obstacles to cycling to work at a women’s cycling social evening at Media City on Thursday 1st March.

If you’ve got past that stage and just need a bit of help to build confidence and establish a routine, there are free bike rides for women organised by Transport for Greater Manchester every Thursday morning until the 22nd of March.