Get your skates on! The UK’s only dedicated Roller Derby venue 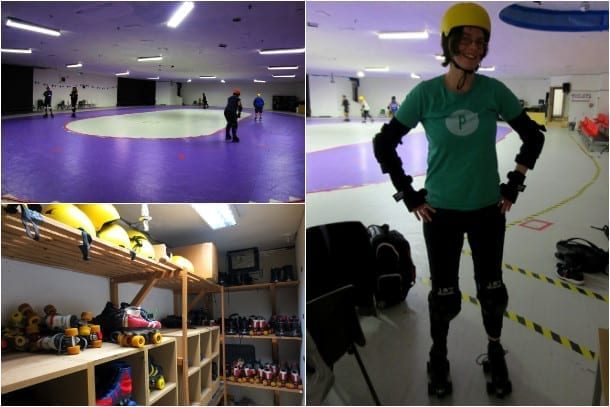 Manchester’s links with sporting success are well documented, but did you know the area is also the home of the UK’s only venue dedicated solely to roller derby? Kaleigh Watterson went down during one of their weekly new skater sessions to find out more about this growing sport
Share
Tweet
Share
Chat

A former pool hall in the heart of Oldham town centre may not seem like the most obvious location to try one of the UK’s growing sporting success stories, but up a few flights of stairs and behind an unassuming set of double doors, you’ll find the home of Rainy City Roller Derby -The Thunderdome. It’s a game with a dedicated fanbase and rising in popularity.

For the uninitiated, roller derby is a contact sport played by two teams on roller skates. The teams skate in the same direction around a track and each game consists of a series of short ’jams’ in which one player on each team, the ‘jammer’,  aims to score points by lapping members of the opposition. The rest of the team attempt to hinder the opposing jammer while supporting their own.

Rainy City have been based at The Thunderdome since 2011. It’s a 250-capacity venue with a large, purple ring painted on the floor to signify the track. Seating is spread along one wall of the venue, with another section (marked as the Suicide Seats as the players could potentially fall into you) on another side. There’s also a small bar selling hot drinks, soft drinks and local beer on game days along with merchandise stands. It’s unlike any other sporting venue I’ve ever visited, mainly because of just how close you are to the action.

I visited during one of the Monday skate schools sessions. Run as a drop-in style event, skaters of all genders, ages (18+) and abilities are welcome to get involved and try it out. Some of those attending on the night I visited are new to the sport and in their first or second week, others are regular visitors learning more advanced skills. Members of the teams also lead the sessions on a rota basis.

Although a female-only team, men are also invited along to learn to skate and they’re given the opportunity to become referees. As each game needs seven referees to keep an eye on all the action, there’s always a demand for them. 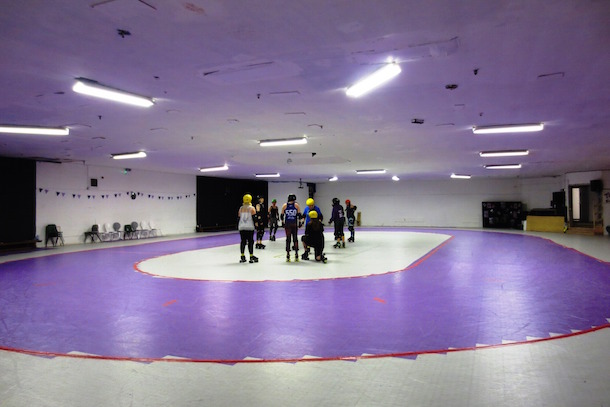 The new skater sessions focus on basic skills such as falling, stopping and generally being comfortable on wheels. It usually takes a year for someone to go from their first session to becoming a member of the team, and they’re required to pass a minimal skills test covering areas such as how to stop, fall correctly and do 27 laps of the track in five minutes before they play on a team.

Rainy City was formed in 2008 and previously trained in a sports hall in Bury before securing cash from Sport England to help them create their current base. The squad is made up of three teams: the All Stars are the A team and are among the top ten roller derby teams in Europe; the B team are the Tender Hooligans who focus on playing competitive games while improving their skills; and the C team, the Bet Lynch Mob, is made up of newer members who have passed a minimal skills test and are ready to learn more. Each team will generally play five or six games a year or more if they’re involved in tournaments.

As the All Stars are in an international league – they’re currently in 88th place in the world – games against international teams are common. In May, the All Stars will be heading over to Miami as part of an event called Beach Brawl, and last year the club completed a tour of the East Coast. Fundraising events, such as an upcoming fashion show, are the main ways the club get the cash to attend overseas trips – although as they own their venue, they’re also considering sponsorship ideas for the future.

Unlike other sports where fans might find themselves with little or no say in how their team is run, roller derby has also had a focus on being very community based. Although it all looks very professionally run, it’s all done on a DIY-basis with the club’s president and the five members of the board of directors all volunteers who don’t get paid for their time. It’s all done out of love of the game. In fact, when Rainy City secured their premises at The Thunderdome, the fit out was all done by the players themselves.

“We laid the floor with grey and purple tiles, we painted the walls,” Emma Lyskava, a member of the A and B teams and the club’s PR director, told me.

Although roller derby seems like a fast and furious game – it is a contact sport – serious injuries aren’t that common. Typically, it’s knees and ankles that will suffer but Emma is keen to stress the safety of the sport. “It’s no more dangerous than football,” she says.

A recent BBC Sport feature on the team has led to more exposure for Rainy City, including an increased interest and a buzz on social media.

Emma is hopeful there will be more interest in the sport in the future.

“I’d like to see it become more respected,” she says. “Some people still see it more as a performance rather than a sport – for example, someone actually asked if we skate in lingerie!”

The team has recently decided to undergo a rebrand, including a new logo and removing Roller Girls from their name. “We’re still a women’s team but we decided to make the branding more gender-neutral and a bit more grown-up,” explains Emma.

So, how did I get on? After signing a waiver and getting kitted out with a helmet, knee pads, elbow pads and a wrist protector, I was all ready to go.

However, a lack of confidence combined with fear of damaging an ankle injury sustained a few days earlier meant I didn’t get any further than standing up and gingerly pushing my feet forward slightly. But I’ve got plans for a return visit once I’m back to full fitness, so I’ll be getting my skates on soon. Honest.

Rainy City’s next game is the Bet Lynch Mob vs North Wales Roller Derby on April 30.