Get your pens out: OverDrawn is back with a monthly residency at The Deaf Institute 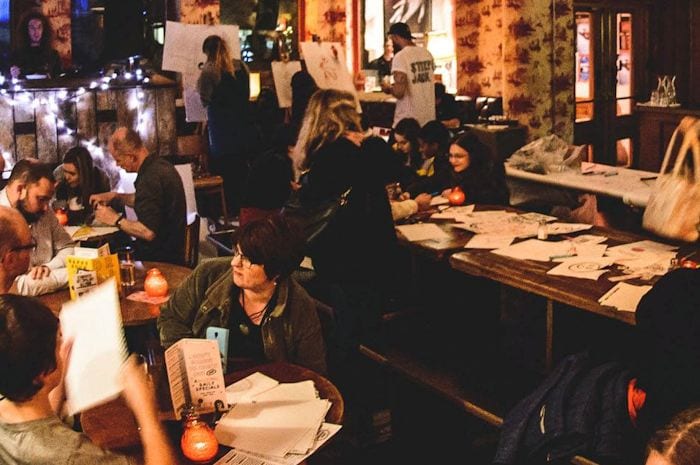 Overdrawn? Lots of people are in January. That’s why it’s the perfect time of year for the return of OverDrawn for a monthly residency at The Deaf Institute.

OverDrawn gives four talented local artists the opportunity to create a piece of art from scratch in front of an audience whilst you get the chance to drink and draw to your heart’s content.

To put your creativity to the test, the tables throughout the venue are wrapped in paper for anybody to draw on as the night goes on, and you will be invited to perform tasks such as drawing what Monday morning feels like and drawing your rap altar ego. There will also be a chance for you to contribute to a collaborative piece called the Open Pencil.

The artists to feature in the upcoming event include Meha Hindocha, Andrew Dawson and Andy Hogg.

Kenyan born Meha’s work embraces a range of different styles and inspirations which reflect her travels across the globe and her African roots.

Andrew taught painting and drawing to adults at Salford University before teaching overseas and honing his art skills on the whiteboard. He returned to the UK in 2014 to pursue his goal of becoming a professional artist.

Much of his work, including his most recent series entitled Sentinels, is created using acrylic and Indian ink on canvas to create a sprawling and immersive body that is both jarring and striking.

Andy, who got back into art last year after a 15-year hiatus, has a striking and definitive style that clearly draws on tribal influences as well as more traditional, free-flowing, doodle-like creations.

“A lot of my work seems to orbit around natural and organic themes,” says Andy. “I’m influenced by anything and everything really, including medieval art, Indian and Moghul miniatures, John Muafangejo, political poster art, Mexican muralistas and street art in general.

“I particularly like painting, drawing and scrawling and I have been dabbling in some screen printing and lino cutting recently.

“I love the buzz of painting live and competed in Art Battle for the first time in 2016. I think the creative process live is an instant and a collective experience.”

The event will be hosted and curated by artist Pete Obsolete with grooves by local DJ Rev. Austin Sherman. Work by the featured artists will be sold at a silent auction held at the end of the night.

OverDrawn is at The Deaf Institute on the last Thursday of every month from January 26 and starts at 7pm.  Entry is free.