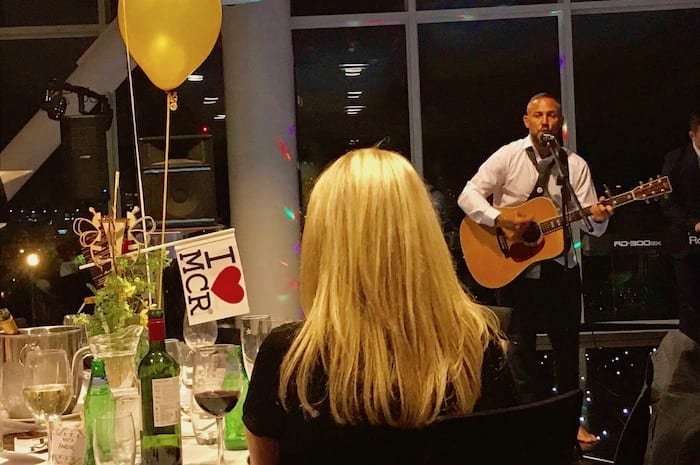 James ‘Shinny’ Davenport made it to 24 in the charts last year with his single Christmas Number One. This year he’s aiming for the top spot.

Reaching number 24 was a massive achievement for a local lad without a record label – getting into the charts through the support of his fans and determination alone.

Now Shinny is convinced that 2017 is the year the single will make it to number one.

“Nearly 90 celebrities, including Boycey from Only Fools and Horses, have sent in their support,” says Shinny. “This includes good luck messages coming from fans including Jools Holland and Emmerdale’s Danny Miller.”

He’s had plenty of videos of support sent in from fans across the world, too, including A-Team star Rampage Jackson, who sent a good luck message from the States.

“People are backing the single from across the globe,” says Shinny “There are even fans in places like Australia and Brazil. It’s brilliant.

“The key message behind the single is to connect people through positivity. Just like my daily broadcast The Shinny Show Live, I want to send out a message of hope that people can achieve their dreams.

“I want people to play my track all over the world. Where best? I’d love to hear people playing it in New York City or perhaps Salford Shopping Centre. It’s a tough one – haha.”

Shinny decided to release the track last year after six months of dedicated detox following an addiction lasting 25 years. A former professional Rugby League player and boxer,  he is now hoping to inspire others through music and raising money for good causes.

“It’s even more organised this year,” Shinny told us “And the best way to get behind the single is to download it – it’s all about the download. People have up until the 15 December to order it on the two platforms Amazon and iTunes – we’re keeping it simple – then it is released on multiple channels.”

He has also been working on another charity single for the New Year – a cover of David Bowie’s Heroes – involving homeless people and raising money to help them.

Public support is in full force behind the single too. And Shinny even has plans to join  buskers The Piccadilly Rats on the city streets to play to passing crowds.

“In the age of having access to our own music, we don’t need to be signed to a big company. I’m here to give the music industry big boys a slap in the face. Even to get into the top 10 through public support alone would mean so much more than having a big company behind me. Enjoy it and download. All profits go to an amazing charity.”

And it’s hard not to get into the groove of Christmas Number One – an anthemic, feelgood tune which, in Shinny’s words, “brings people together and promotes positivity.”

You can support Shinny by pre-ordering the single and staying in tune with his daily broadcasts on his Facebook page at 7.45am every morning. There is also a recovery talk show every Wednesday evening at 8.15pm.

“This is my final year going for number one with the track, so it really matters that people get behind it. How about an underdog coming through for a change? We can all unite and get to that top spot. Bring it on.”

Download Christmas Number One on Amazon and iTunes. All profits (57p from every 99p download) go to the local children’s charity Wipe Your Tears.