George Orwell in Manchester: a visual tribute to the author of 1984 by 17 artists 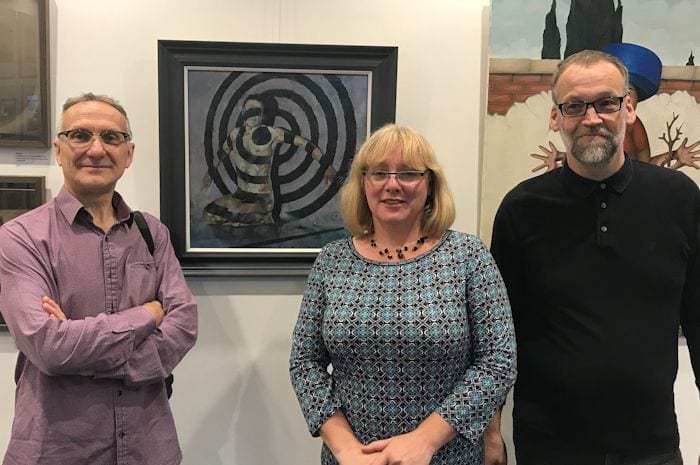 On 25th April 1946, the Manchester Evening News published the following notice about one of its writers:

“Mr George Orwell, who has been conducting the Life, People and Books feature in the Manchester Evening News for the past two and a half years, has decided to take a rest from journalism for six months. He is retiring to a house he has taken in the Hebrides for this purpose.”

Orwell rented an abandoned farmhouse on the remote island of Jura because he wanted a quiet space to write a novel that had been incubating inside him. Its provisional title was The Last Man in Europe.

Despite living in spartan conditions at the farmhouse and being seriously ill with tuberculosis, for which there was then no cure, he completed a first draft in November 1947. In December 1948, he sent the finished manuscript to his publisher, having typed it  from his sick bed.

The book was published on 8 June 1949 but with a different title – Nineteen Eighty-Four, one of the greatest novels of the 20th century. Less than seven months later, Orwell died aged 46.

Orwell’s masterpiece is one of the best-selling books of all time and even more relevant today than it was when it was published.

In Room 103: A Visual Tribute to George Orwell, a new exhibition at The Saul Hay Gallery,  17 artists pay tribute to the great writer and journalist through paintings, sculptures, and videos inspired by his work.

Curator Glenn Ibbitson spent the last year exploring Orwell and the presence of his ideas in art today – issues such as surveillance, fake news, state repression, and the preservation of individual liberties through freedom of expression.

The collection reflects Orwell’s international importance, with contributions from not only artists from these shores, but also the United States, Italy, and Catalonia.

The launch was attended by Richard Blair, Orwell’s adopted son, who spent time with his father on Jura, and Quentin Kopp, son of Georges Kopp, Orwell’s commander in the Spanish Civil War in which he fought.

Richard spoke of his father’s visit to Manchester as part of his research for The Road to Wigan Pier and how he wanted to draw attention to the deprivation that existed in the north in the thirties.

At the time, many people were offended by Orwell’s work. It was only after his death that he began to gain worldwide recognition. In Richard’s words, “If you’re going to be successful, you’ve got to be dead.”

Harsh landscapes from visual artist Alan Pergusey strongly resonate with distant memories of a more ideal world. Robert Nigel Pugh and curator-artist Glenn Ibbitson focus on the human figure within the environment, where reality and illusion are blurred.

“It probably wouldn’t have occurred to him his words would be reflected in art. He used words as his art form,” Richard Blair said.

“However, I would urge you to look around and see some of the fascinating paintings and see if you can draw out the relevance from the painting about Orwell himself. I’ll leave you to do the interpretation.”