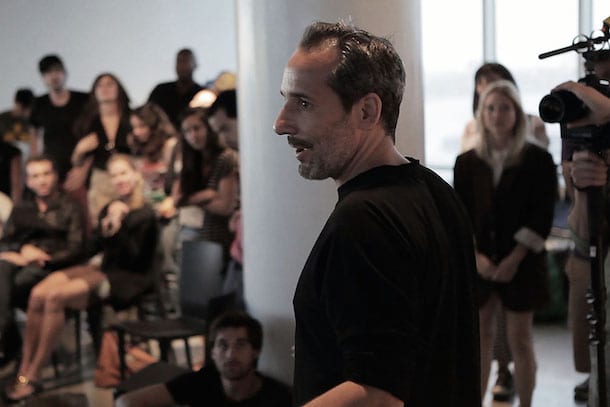 What is real love? New York film-maker Matt Herron spent over 15 years peeling back layers of expectations and disappointments to explore how we allow fear and loneliness to sabotage lasting love. The result? Audition, an award-winning film which has its international premiere on Sunday March 6th at the Odeon Printworks as part of the Manchester Film Festival
Share
Tweet
Share
Chat

Born in Manchester, Connecticut, Matt was adopted at 14 months by Gordon and Betty Herron, who migrated to the USA from the UK in the early 1950s.  Gordon’s grandfather was a local steeplejack born and raised in Manchester UK,  and his father worked at Rolls-Royce as a tool and die maker.

At the age of 16, Gordon joined the RAF and served as a paratrooper instructor during WWII. Back in Manchester, he became a successful door-to-door salesman, a career that would sustain him throughout his life.

First settling in Connecticut, his parents decided that they wanted to live in their treasured vacation spot, located in a tiny idyllic town in Maine called Phippsburg, which would serve as the backdrop to Matt’s early life. Because the town had no movie theatre, an aunt gave them a Betamax player and sent videos several times a year of films she taped off TV.

The boxes would contain a dozen or so tapes of everything from Hollywood blockbusters to experimental art films that Herron would watch over and over again.

“It affected me in a really strong way, just being able to see life from a different point of view from where I was in the country. I loved those escapes. I would get up in the middle of the night and watch films that I wasn’t supposed to be watching,” he says with a laugh, “like ‘Looking for Mr. Goodbar’ or ‘Equus.’ ”

It was his father’s keen eye and passion for photography, taken with a prized Rolleiflex and an 8mm camera, which would ignite Matt’s own artistic curiosity.

“I was really fascinated by both, but mostly the 8mm film he would shoot. He’d put a sheet up at the end of the hallway and we’d all sit on the steps watching the footage. My dad and his cameras had a big effect on me. I knew where he hid the 8mm, and when he was away I would take it out and pretend to shoot with it, playing with all its features by chasing the cats around with it and composing them in the zoom lens.”

On the surface, Audition is a cautionary tale of how a one-night stand can easily evolve from sizzling to tragic when a young couple’s desperate search for love becomes unsustainable by physical attraction alone.

Behind the scenes, a different drama takes flight as 100 of New York’s finest actors compete to portray the young couple in the film’s explosive finale as their short-lived romance spirals out of control. Until then, each scene is presented as a unique compilation of the best performances from multiple actors.

It is when the film is viewed as a whole that we realize Herron has blurred the lines between fact and fiction so seamlessly that it is challenging to distinguish what is real and what is not. In the end, the characters’ search for love parallels the actors’ struggle for success as the story ricochets between desperate optimism and inevitable rejection as this sensually riveting journey unfolds.

Tickets for Audition are available at www.maniff.com and from the Odeon Printworks box office.

For more information about Audition auditionthefilm.com