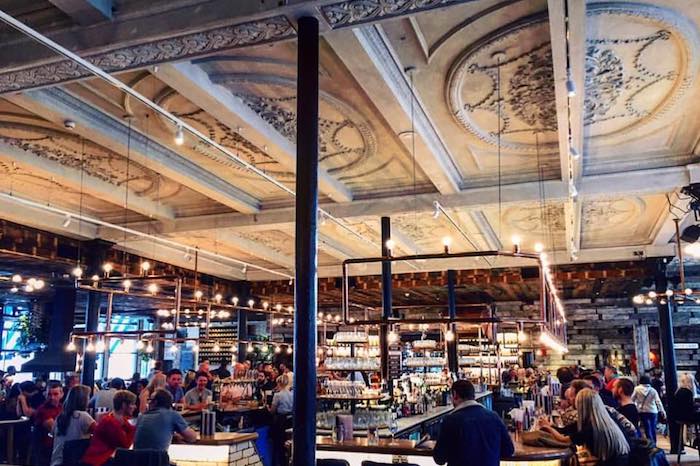 When Albert’s Schloss received rave review from national food critic Jay Rayner this week we thought we’d explore where and what else he likes about our beloved city’s food and drink scene.

Rayner described Manchester bar eatery Albert’s Schloss as a ‘class act’ when he reviewed for The Guardian this week.

He tweeted: “Albert’s Schloss, Manchester. It could be a nightmare; instead it’s a brilliant night out serving groaning platefuls, of pseudo Teutonic food.” We couldn’t agree more, Mr Rayner.

“Oh the schweinshaxe! And the drag queens. I really should hate it. I should want to be anywhere but here. But I don’t. Albert’s Schloss is a class act,” he concluded.

This week’s review: Albert’s Schloss, Manchester. It could be a nightmare; instead it’s a brilliant night out serving groaning platefuls, of pseudo Teutonic food. Oh the schweinshaxe! And the drag queens. https://t.co/pJYsSi26xG

Just as striking was Rayner’s gushing tribute in the Observer to Y Sok’s Angkor Soul restaurant in Stockport, one of only two Cambodian restaurants in the UK.

How on earth did the oft intimidating Masterchef critic find Marple?

Jay said the soup at Seoul Kimchi “should be offered on prescription on the right sort of cold, damp day of the type Manchester excels in” when he visited in September 2017. “This is cheap, gutsy Korean soul food, which will curl your hair with a faint sheen of sweat if you order properly and help the world to settle firmly on its axis.”

He said Bundobust Manchester is “something special” when he reviewed in February last year. “This is brilliant vegetarian cooking which makes its argument on its own terms. It’s centred on a culinary culture which is not making up for absence of any kind. There is nothing to miss.” He also felt ‘fondly’ about the real craft beer geeks.

He described Umezushi as “small, intimate and refreshingly affordable” when he reviewed in September last year. “A bit of a diamond in the rough; a hidden temple to the worship of good things” he concluded.

Rayner told the MEN he likes Hawksmoor Manchester – despite previously saying it wouldn’t work up north – saying “they keep it simple and focused and that’s why it works so well. They also made sure they hired some of the very best people in the city in their field.”

Rayner shared some advice for Manchester restaurants: “Manchester’s dining scene is very strong and it has a lot going for it – but it does have a tendency to get preoccupied with frippery,” he says. “Big trees, dry ice – all of that. Basically, there’s too much that’s not about the food. All I care about is the food, the rest doesn’t really interest me at all.”

The man spends 55% of his dine time in London but tries to come up north as often as he can. He knows the craic.