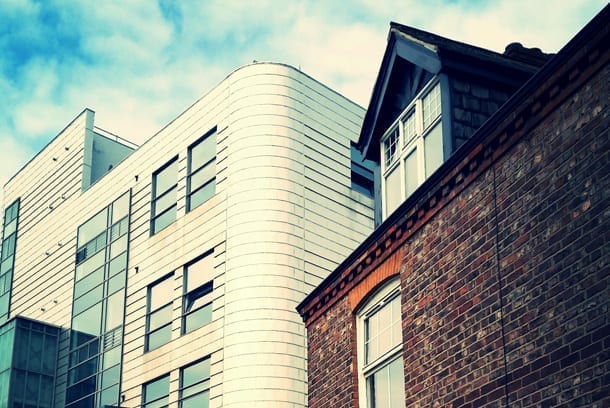 When I first arrived in Manchester, Ancoats was a bit of an enigma. Part of the city centre, but not. A couple of rough and ready pubs, Sankeys.

‘Ancoats is very much back
in the spotlight.’

A friend of mine used to work at the drop-in hostel which backs on to George Leigh Street. He lived there, with some of the residents. Many of them were deeply troubled, yet strangely engaging.

Two of them used to guard the front doors wearing only cowboy hats and y-fronts, tooled up with cap guns. The Y-Front Cowboys stood watch for hours at a time and if I wanted to get in to see my friend, I had to guess the password. The problem was that nobody knew the password. Not even them.

Fast forward almost 20 years and their former home is now at the epicentre of a laboured but lovingly put together regeneration strategy. Much of it is organic – cheap space attracts interesting local businesses who create the need for services etc.

The mills are being restored for a new generation of workers. Dwelling houses are architecturally focused rather than thrown up in haste. The social housing in Victoria Square is innovative and user friendly, for example.

Walking halfway up George Leigh Street to the row of terraces that unrolls like a magic carpet, then turning back to take in the Express Building, is a treat. For some reason, that building and the surrounding streets have always put me in mind of the part of east London that surrounds Liverpool Street station.

There are interesting bars and restaurants kicking around. Vivid Lounge is serving up some great Asian fusion food. Salford brewery Seven Brothers are opening a bar here soon. Pop-ups turned proper businesses like Rudy’s Pizza are resurrecting the spirit of Little Italy in their soon-to-be-opened venture on Cotton Street. Projects like Bridge 5 Mill are providing a community hub for sustainability and other projects.

I asked people on Facebook what they loved about Ancoats. It was an unexpected outpouring.

Islington Marina, Cottonfield Park and the two canals – a haven in the city centre. The way the sun rises over PC World, creating an unlikely early morning light show.

The food and drink. Memories of ice cream selling families. Dodgy pubs of yesterday like the Land O’ Cakes (now Bem Brasil) and the Cross Keys, or current favourites like VNam and Saigon Lotus-proving that you don’t need polish or a shiny city centre presence to grab the attention of the natives.

St Peter’s Church – a permanent rehearsal centre for the Hallé and a resource for the whole community. The raw architectural power of Royal Mills, Brownsfield Mill, Ancoats Dispensary – despite the latter being held together by a mix of scaffolding and optimism. The modern response of CHIPs.

The Band on the Wall. Manchester’s clubland taking on the world from the most unlikely setting, thanks to the recently departed Rupert Campbell and others.

Simon Buckley, a local photographer whose current project, Not Quite Light, sees him walking the streets of Ancoats before the rest of the city wakes (save the odd road cleaner and, ahem, night shift worker) to capture the changing face of the city centre, thinks the area is ‘the most successful of Manchester’s redevelopments…a great mixture of the new and heritage.’

The Smiths credited the backing vocals on Bigmouth Strikes Again to a fictional singer called Ann Coates. It’s time for her to step out of the background now though. It’s been a long time coming, but Ancoats is very much back in the spotlight.