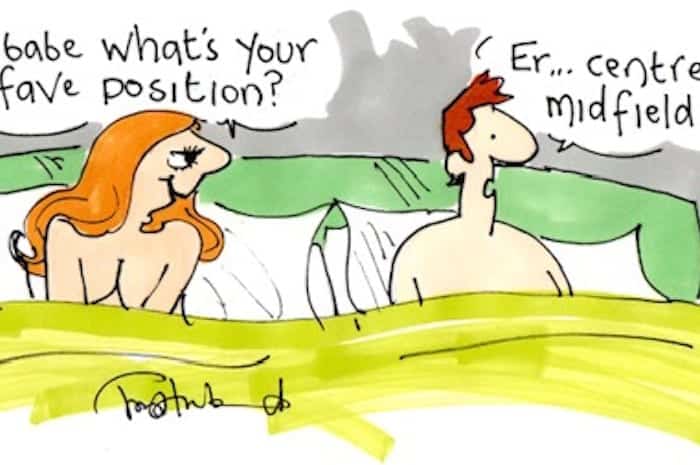 The multi-award-winning cartoonist Tony Husband is launching a brilliant new collection of artwork and products with Forever Manchester.

The Manchester-based artist has had a cartoon strip in Private Eye – Yobs – for the past three decades, and also contributes to The Times and The Spectator.

He has also won over 15 major awards with his cartoons, which have appeared in many newspapers, magazines, books, websites, commercials and several TV and theatrical productions.

And now, to coincide with the start of the new football season, he has designed a collection of football-themed cartoons exclusively for the Forever Manchester charity.

Called It’s in the Blood: Red or Blue, his new collection looks to celebrate Manchester as the home of football, with individual nods to the city’s two rival teams – Manchester City and Manchester United. 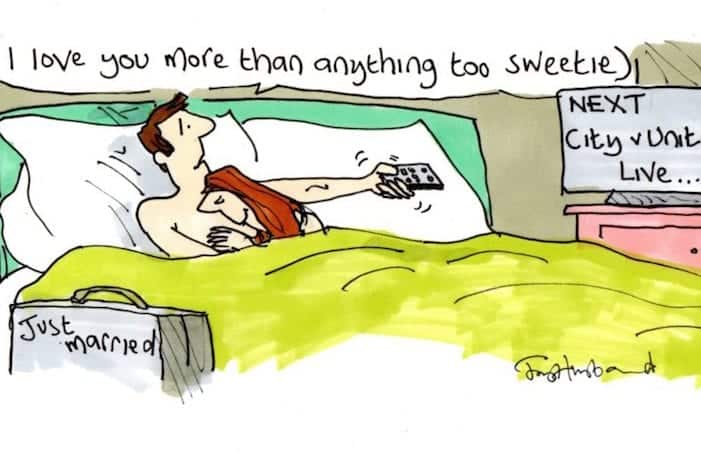 It will also include some of the general football-themed cartoons for which he is more widely known. His drawings are generally both simple, minimalist and wilfully irreverent, with drollery his signature style.

To launch the new collection, an exhibition will take place on Thursday 12th September at The Albert Square Chophouse, with Tony’s cartoons on display from 6.30pm until 10pm.

The artwork will be transformed into greetings cards, coasters, mugs, coasters, limited edition prints, as well as set of ‘red’ postcards and ‘blue’ postcards.

And there will also be a selection of Tony’s original drawings up for grabs as part of a silent auction on the night.

“I’m thrilled to be working with Forever Manchester to help raise funds for their many wonderful projects,” said Tony Husband.

“I’m proud to be from Manchester and proud of our two football teams – perhaps one of them slightly more than the other!”

The proceeds from each of Tony’s cartoon designs will go directly to Forever Manchester, to fund and support community activity across Greater Manchester.

At the launch on Thursday, there will be a welcome drink on arrival and a chance to view Tony’s exhibition along with the football cartoon merchandise ~ all of which will be available for sale.

Following this, all pieces will be available for purchase via the Forever Manchester shop.