The Winter Gathering at the iconic London Road Fire Station looks like being one of the highlights of the festive season in Manchester. This iconic venue will be transformed into a magical winter market complete with an ice skating rink, an exciting line-up of world famous DJs and artists, and a line-up of foodie superstars in residence for the duration.

It kicks off on Friday 11 November with a free entry party with entertainment by Mr Wilson’s Second Liners and a line-up of culinary delights provided by some of the UK’s hottest street food talent, hand-picked by the collective behind the prestigious British Street Food Awards. Some of them deserve an award just for their names. 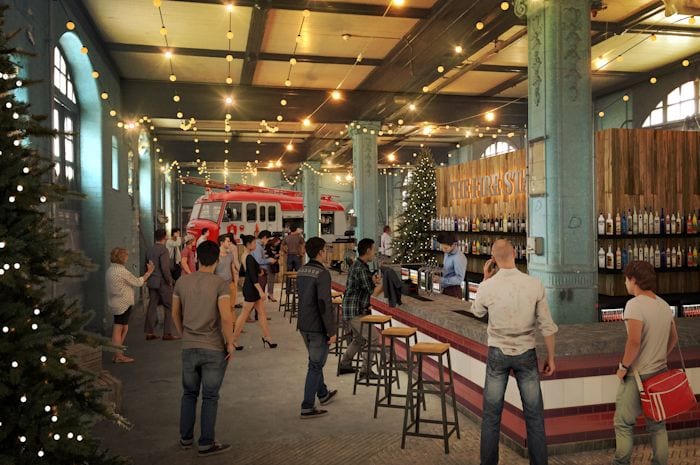 Effortlessly healthy and ahead of the pack, So Salad Crew is already taking the growing trend of mindful, clean eating to the streets. Christmas doesn’t’t mean over-indulging for the sake of it, so rest assured you can get yourself a selection of juices, lush leafy salads and small plates from a menu of carrots, halloumi and seasonal wintergreens. The best bit? You don’t have to resign yourself to spending New Year in the gym.

These multi award-winning wings are sweet, sharp, tender and uber juicy. No wonder they’ve been hailed as some of the best on the planet, dammit. Only the seriously hardcore should even contemplate attempting to take on the team’s homemade hot sauce. Using Californian Reapers and Naga Ghost chilies – among the fieriest in the world – this intensely pimped version of the infamous Dragon’s Blood sauce means business. You have been warned. 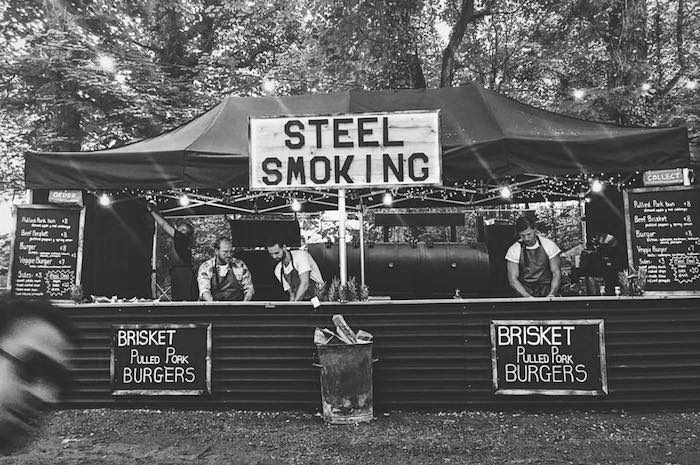 Founded by two of the freshest smokers in the business, Steel Smoking brings together irresistible meats and subtle seasoning. Expect such delights as a helping of rich pulled pork, red cabbage and apple sauce set on a sweet brioche bun, offset with the mild smokiness of searing, smoldering charcoal. Not a meat eater? Not to worry as their aubergine, portobello mushroom and halloumi burger is packed fully of heavy, equally meaty flavours.

Nanny Bill’s first opened the hatch to their 1970’s Citroen HY truck in May 2015, where their signature Spanish croquettes have caused quite a stir. These crisp little balls are absolutely guaranteed to get your endorphins rushing, with crowd-pleasing combinations such as slow-cooked beef and ale; and the pea, mint and feta gaining cult status. Proving to be more than just a one trick-pony, rumour has it they’ll be showcasing their world famous slow roasted jerk chicken before their residency is over. 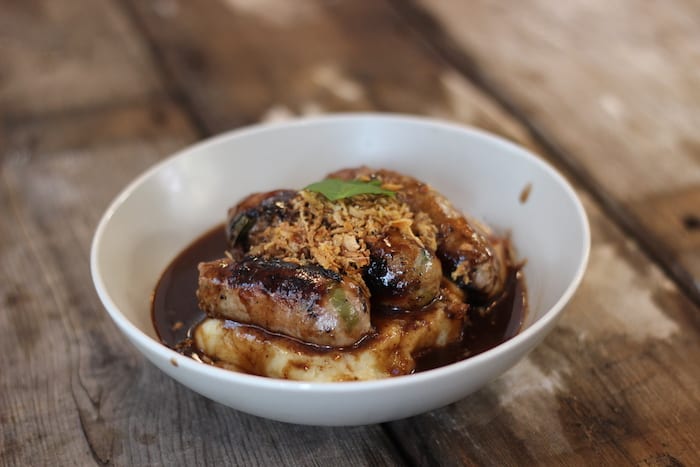 A sophisticated charcuterie with a side of pickles and a comforting dose beef dripping chips brought to you by the duo behind Bangers and Bacon. The concept sees everything homemade, from the sausages to the cured bacon, alongside some incredible, flavourful dishes such as the porchetta — a rolled middle of pork stuffed with herbs and garlic, slow roasted and set on a flatbread with salsa verde and dressed leaves. Genius. 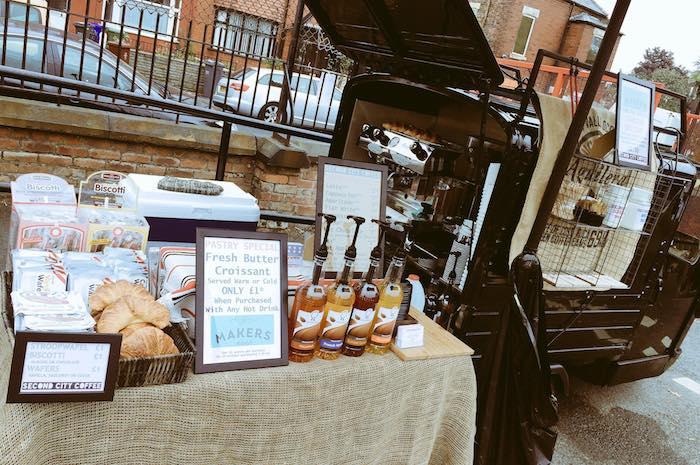 For caffeine with a conscience, look no further than this Manc based coffee company operated by Dex and Luigi, which only roasts in small batches for optimum freshness. Definitely one of the good guys, their signature in-house blend comes from the Cafe Femininio Project, a Peruvian women-only foundation, and Dex is currently looking for his next house to hire disadvantaged and unemployed people needing a break.

The undisputed king of the waffles, their crown is well deserved. Purveyors of the Liège waffle, the most popular variation in Belgium, their fare boasts sugar-crystal caramelised crust and sweet, pillowy insides – perfect for those who would consider brioche too savoury. Toppings include addictive amounts of Nutella, apple cinnamon, and a specially seasonal warm cherry compote and cream.

Sela started their obsession with cheese 13 years ago when they opened a cheese-focused joint in Leeds, and soon found ‘sharing their love’ meant going mobile. They bought a Mercedes bus in 2014 and haven’t stopped since. A big red 1979 Bedford camper affectionately referred to as Starchy is the latest addition to the family and will be serving up a deliciously seasonal menu. Christmas is, after all, all about the baby cheeses. Right?

Streatza is a pizza palace housed in a beautifully converted classic 1969 Citroen H van, complete with a 700-kilo wood fired oven and a fridge stocked with the best Italian tomatoes, mozzarella, and free range meat. You won’t find them using a dough roller here (which would squeeze out all of the lovely air pockets), instead opting to roll all its dough by hand. The end result is a nomadic pizzeria serving slices of heaven in a 12” takeaway box, with a clever name to boot. Right up there with Jason Doner Van.

The Wondertruck from Almost Famous 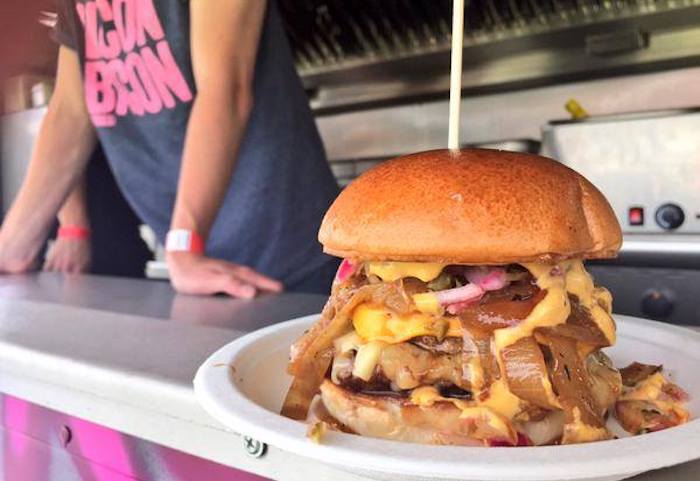 The stuff of legend. Coming at you fully locked and loaded to deliver the Almost Famous burger experience and, at 7.2m, it dwarfs everything else we’ve got at The Winter Gathering. But trust us – it’ll be the wonderonions, the double beef patties and the gooey cheese that you’ll be talking about on the bus home while coming down from your mighty meat coma.

Once the hatch opens, team KerbEdge flip the best burgers this side of the Atlantic. Their handmade chuck steak mince burgers are made from locally-reared Limousin cattle, supplied by Riverside Butchers of Stamford Bridge. These Yorkshire boys are sure to bring the best of British to a scene with a heavy hint of Americana. Speaking of which … 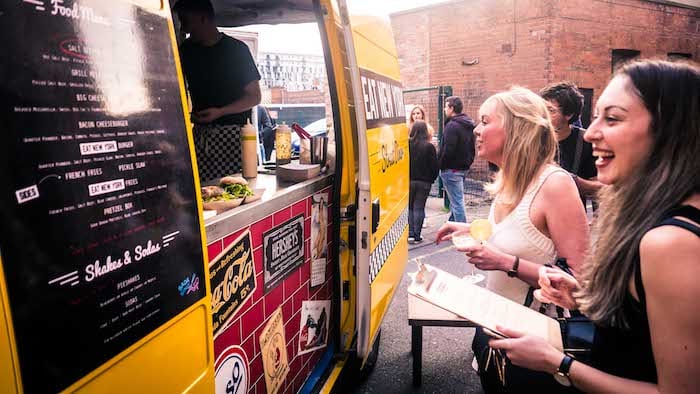 Behold this NY style bagel-slinging food truck with unmistakable East Coast swagger, specialising in salt beef, cheeseburgers, fries, shakes and sodas. Butter-dunked, grilled till golden and slathered with copious amounts of sauce is just how these folk like it, with a side of sloppy as standard. 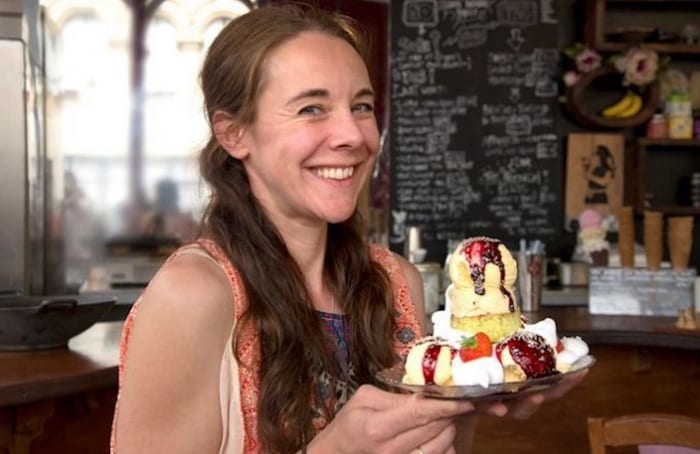 The Winter Gathering is at the iconic London Road Fire Station from Friday 11 November 2016 until Sunday 8 January 2017.

Tickets for the ice rink are now on sale here. Saturday nights are expected to be the busiest thanks to a line-up of special guests which will be announced each week. Tickets are available to buy from Skiddle to guarantee entry.