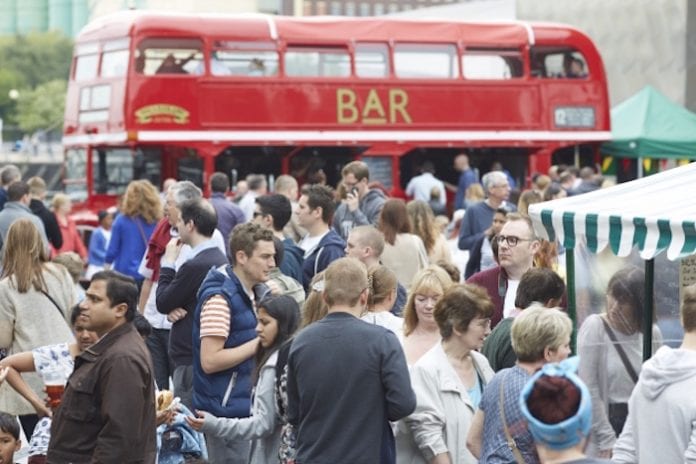 Lowry Outlet’s Food Festival is now an established part of summer at MediaCityUK.  It’s one of the busiest weekends of the year with both inside and outside stalls, theatrical food vans, tastings, personalities, cook ups and an array of foods from all over the country, cooking demonstrations and lots of places to eat and drink.

Now in its fourth year, the festival continues to attract some of the UK’s biggest culinary names to MediaCityUK. Following in the footsteps of chefs of the calibre of James Martin and Paul Hollywood, this year two of Britain’s most inspirational cooks arrive hoping to excite and inspire the North West’s ever-growing army of foodies.

First up on Friday, June 24 is Great British Bake Off winner Nadiya Hussain. She has certainly lived up to her cry “I can and I will” following her GBBO triumph. She produced a three-tier cake which she presented to the Queen to celebrate her 90th birthday and is now getting her own BBC TV show – The Chronicles of Nadiya.

She’s followed on Sunday by Levi Roots who says “If a black, Brixtonian Rastafarian with just a sauce can make it – you can make it too!”

From his Reggae Reggae sauces to writing his own songs, producing and singing on his albums, to opening his own Caribbean restaurant in London, Levi is one of the most explosive characters in UK cooking.

Sandwiched between them on Saturday is a dazzling array of Manchester’s finest restaurant chefs – both established and up-and coming – including Aiden Byrne from Manchester House, Victor Yu from YuAlderly Edge, Doug Crampton from James Martin Manchester, Carl Fraenkl-Rietti from Damson in MediaCityUK and Dave Lythall from Hotel Football.

Lowry Outlet centre manager Kelly Hurst said: “Nadiya captured the hearts of the nation on Great British Bake Off and we’re thrilled to have her on board for this year’s festival along with much-loved sauce entrepreneur Levi Roots.

“We’re excited to be showcasing our own region’s finest talent as well. Manchester is well-known for its fabulous chefs and foodie following and there’s some great talent out there making waves on the Manchester scene.”

All cookery demonstrations will take place in the Aga Rangemaster Cookery Theatre in the Plaza between the Lowry Outlet and Lowry Theatre. There will be opportunities to meet the stars, pose for pictures and have books signed.

A separate Kids Cookery Zone offers an opportunity for youngsters to learn basic skills in the Kids Cookery School plus games and food-themed activities.

Away from the demonstrations is the Live Music Stage with incredible new talent being showcased, mouth-watering street food and stalls of cookware, crafts and award winning national and global cuisine. Plus the return of The Bus Stop Bar, a funky converted double decker bus with deckchairs and its own DJ.

Lowry Outlet Food Festival is free for everyone. The Aga Rangemaster Cookery Theatre demonstrations cost £5 and tickets for this go fast.