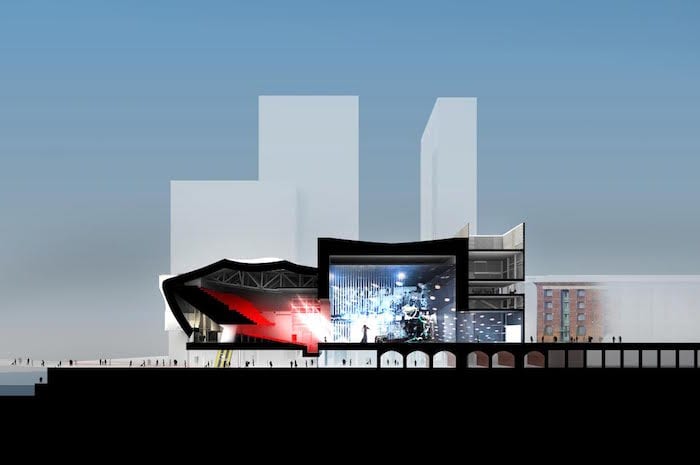 The funding, revealed in the latest Arts Council England grant announcements, includes £7m capital from the Lottery Fund and £9m annual revenue to help get the venue up and running from 2018-22.

That means even more money will go into the Rem Koolas-designed arts centre on and around Quay Street – the first major public building in the UK to be designed by the famous Dutch architect and his Office for Metropolitan Architecture.

It will create a versatile and exciting arts space for creatives of all kinds to come together – from opera and theatre to music and cinema. Manchester City Council leader Sir Richard Leese has predicted Factory will make Manchester and the wider region ‘a genuine cultural counterbalance to London.’

Factory will have an estimated capacity of 5,000 people and will be a place to enjoy experimental arts, stage shows, public exhibitions and so much more on a scale not seen before in Manchester.

Work on the building on the site of the former Granada TV Studios starts next month with a groundbreaking ceremony on 8 July 2017 so there’s not long to go before you can see it taking shape. The building is due to be finished by 2020.

Factory will be run by Manchester International Festival, which has been awarded £9.73 million as part of Arts Council funding, of which £9m is for The Factory and £730k is for the continuation of the biennial festival taking place during June and July this year.

There are big predictions for Factory, including its contribution to economic growth. It’s expected to play a role in creating or supporting almost 1,500 full-time jobs and adding £1.1 billion to the city’s economy over a decade. Plans are in place to develop partnerships with the city’s leading higher education institutions too.

“Factory is going to change lives as well as the cultural landscape – not just here in Manchester but nationally and internationally,” said Sir Richard Leese.

“The economic benefits to the city and wider region are huge. The impact it will have on arts education and the development of creative and technical talent is significant.  And the range, scope, and scale of cultural opportunities it will provide for audiences from far and wide to come to the city and enjoy in this transformative and unique space will be unrivalled.

“Factory is, without doubt, what the arts world and Manchester has been waiting for.”