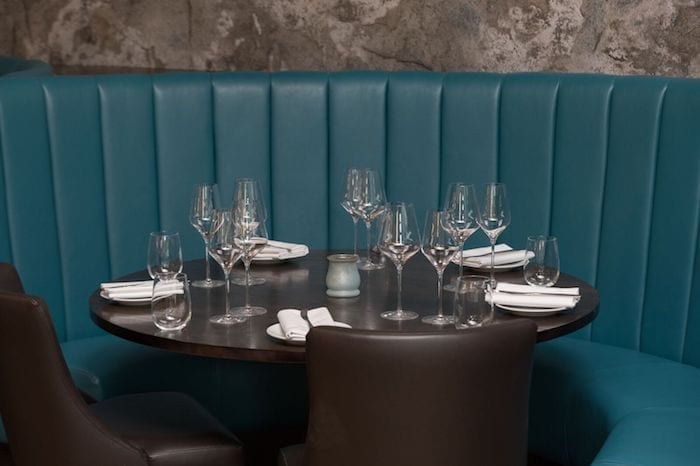 Simon Wood himself for a start, beavering away in his open kitchen. Plus oak floors, the stacked wooden ’tiles’ supporting the bar, theatre kitchen pass and the partition between bar area and dining room.

Solid wooden beams and columns hold up the mezzanine floor above. The tables are dark wood and the chairs are, yes, you guessed, wooden too – apart from the turquoise leather banquettes. The turquoise will endure, the other furnishings won’t. The real stuff, more colourful apparently, hadn’t arrived in time for the launch.

So much for the chic, contemporary backdrop. Chintz in such a modernistic setting would be just ridiculous. But what about the much anticipated restaurant itself?

Well, it’s a brave undertaking. High-end independent restaurants in Manchester have a somewhat awkward history, but one lives in hope that Chadderton-born Simon, who deservedly won national recognition after gobsmacking Masterchef hosts John Torode and Greg Wallace with the sheer brilliance of his cooking, can cut the commercial mustard.

Backed – 50-50 I’m told – by the developers who created First Street, where Simon believes is ‘a thriving up-and-coming and growing area’, Wood seems to have firm foundations.

That impression is underscored by Simon’s recruitment of head chef Mike Jennings, who was mentored by Shaun Rankin at Bohemia in Jersey and schooled at Nigel Haworth’s stellar Northcote in Langho before taking over Salford’s acclaimed Grenache.

And then there’s the arrival of James Cunningham as Wood’s general manager after impressive stints at Harvey Nichols and the Abode Hotel group when celebrated chef Michael Caines was on board.

Former data manager Simon, entirely self-taught and patently proud of it, started cooking when he could ‘reach the top of an oven’. His journey began at eight years old when he won a competition to be anything for a day and he chose to be a chef. And if ‘self-taught’ is a problem for anyone, remember this. Better to pursue a passion than to turn up at catering college as a last resort. Discuss.

He names Daniel Humm of 11 Madison Park, New York, Marco Pierre White, Gordon Ramsey and Michael Caines among his culinary heroes. He’s watched them and sought to emulate them. Of his Masterchef triumph in 2015 he says, without a shred of conceit, that he knew he was better than his rival contestants in the final – a feeling borne out by a Sun newspaper poll ahead of the programme that put him streets ahead.

And it wasn’t just telly hype. Simon threw himself into the heat of the top kitchens featured on the show with incredible enthusiasm, not only learning from performing his own demanding tasks, but also – largely unseen by Masterchef’s viewing millions – getting involved with those of his competitors.

Wood’s concept is ‘unintimidating high-end dining’ – something of a mouthful even before one starts eating – though sharing a tomahawk steak with green peppercorns and a duo of sides for £80 may well intimidate an average wallet.

The press launch starter was much less scary in terms of price, but still accomplished. Wild mushroom ravioli with sage, crushed chestnuts and pangrattato breadcrumbs. It was rich and earthy. The porcini came singing through – and dare one say it – straight from the woods, with which a glass of Chilean gewürztraminer went down beautifully.

Had the Malbec been able to speak it would have said ‘I do’.

Dessert was at once simple, nostalgic and right. Lemon posset (remember that?) with a light puff pastry finger topped with fruits and micro-meringues for dunking.

I’ve always favoured the provenance of good – local if they’re good enough – ingredients over show-off cheffiness, but I admit there’s a balance to be struck. Simon Wood looks to be striking it with some panache.