Pollen Bakery was founded by Hannah Calvert and Chris Kelly, who both share a love of great bread.

After spending time in France, they were inspired by the general availability of top class fresh bread and pastry products and how they form a part of daily culture. 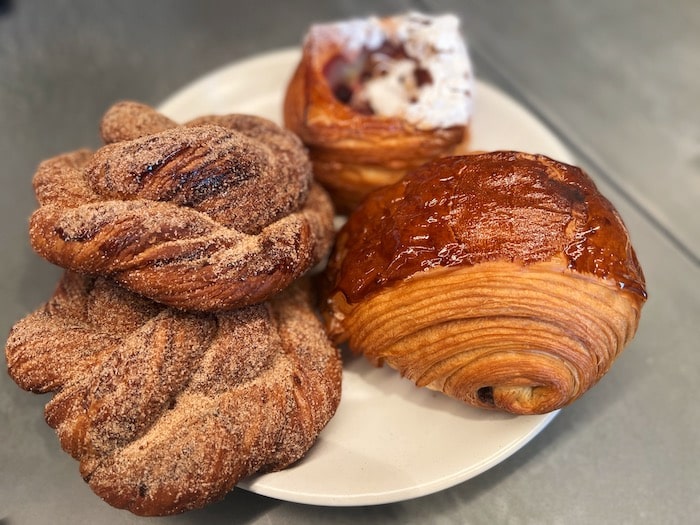 After trying their hand at making artisan sourdough in their home kitchen, using the San Francisco approach to bread-making, they became hooked and began baking for friends and colleagues.

Soon, they decided to take the plunge, expand the business and invest every penny they had into making a go of their own bakery.

The original Pollen Bakery opened in 2016 in a railway arch underneath Piccadilly train station, and soon queues began forming round the block as demand grew for their sourdough loaves and delicious pastries. 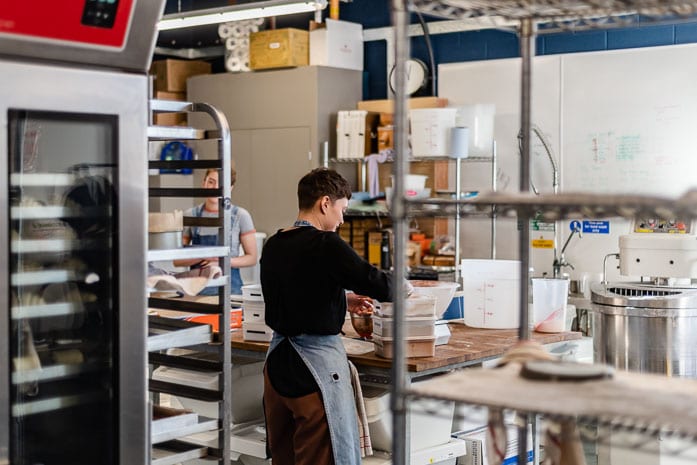 By 2018, Pollen Bakery had outgrown the archway and moved to a bigger location at Cotton Field Wharf in Ancoats, located beside New Islington Marina.

Designed by local interior design studio No Chint, the new 2,600 square foot unit at Kampus, which opens on Thursday 9th June, incorporates a dedicated pastry kitchen behind a glass gallery where visitors will be able to watch the talented pastry team create pastries, breads, cakes and other speciality baked goods throughout the day.

The space will also boast a bigger café space, which will offer an expansive seasonal menu showcasing the best available produce across the year. 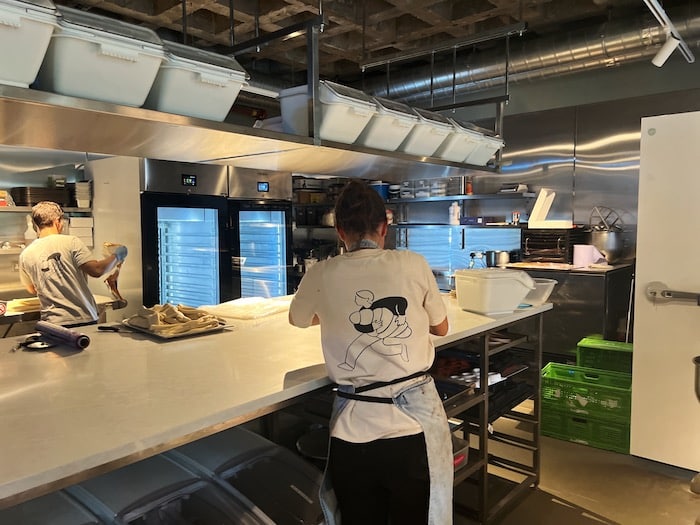 The café will open from 7am from Weds-Fri and from 8.30am at weekends for local residents and visitors to purchase freshly made loaves and pastries, and to start their day with a cup of coffee and a proper breakfast.

Dishes include the likes of breakfast buns – fluffy egg with Westcombe cheddar and watercress, or smoked streaky bacon with butterhead lettuce and charred tomato ketchup – as well as the hugest flaky, buttery croissants, fruity raspberry pastries and cinnamon knots. 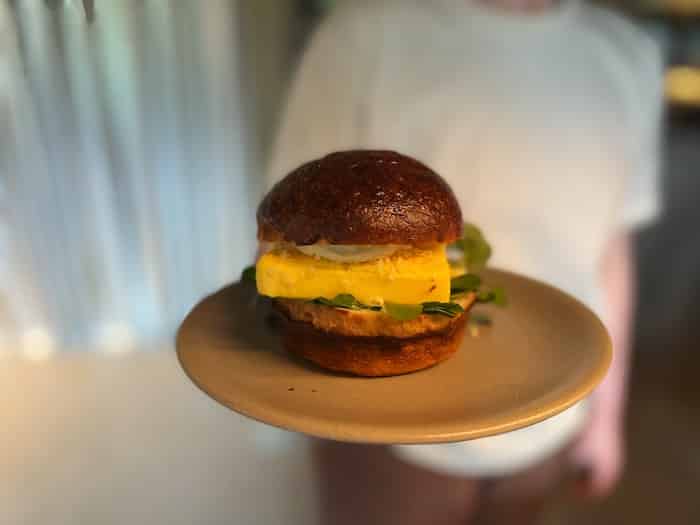 From around 11am, there are seasonal plates such as fresh English pea teatime with broad beans, agretti, house made ricotta and lardo; white asparagus with soft boiled egg, lovage and walnut; and hogget shoulder hash brown with dill kraut and Neal’s Yard crème fraiche.

Suppliers include Littlewoods Butchers, Out of the Blue Fish and Hasbean coffee.

There is seating both indoors, and outdoors overlooking the Kampus garden. 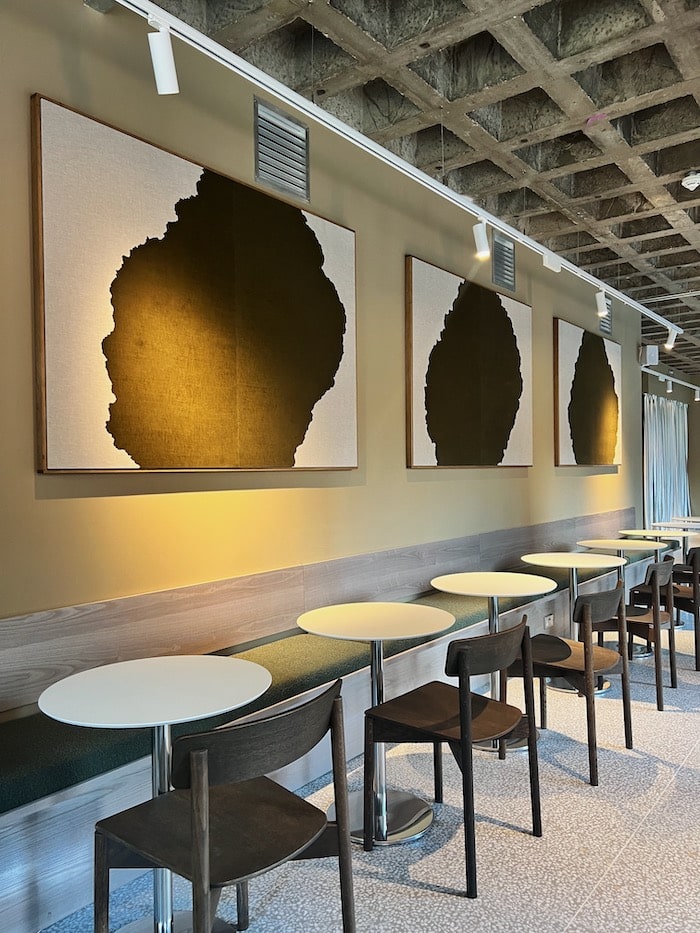 “We had the passion, the drive and the eye for detail and quality to be able to bring something new, exciting and needed to the city centre” says Hannah.

“We put our heart and souls into everything we do and are always pushing forward to give our customers and the city the best offering possible,” says Hannah.

“It’s good, because we care.

“Kampus is a fantastic development with a strong focus on housing some of the best independents in the north and we are privileged to be a part of it.”

“Our second location in Kampus forms part of our evolution and growth,” said Chris.

“After drastically running out of space at our Ancoats bakery, the new location re-homes our pastry team in a dedicated pastry kitchen behind a glass gallery so you can see all the action taking place throughout the day and the masters at work.

“We will still serve the full range as usual at the Marina, but the new kitchen will allow us so much more creative freedom. 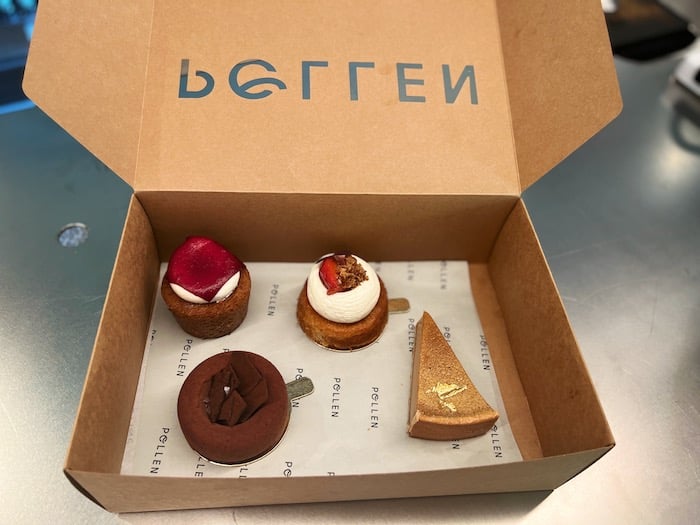 “With a bigger café space, we’re creating a brand new, modern, refined menu which will change with the seasons and showcasing the best produce available at the time.

“We’re working with some fantastic suppliers and can’t wait to show you a taste of what we’re working on.”

Pollen will open at Kampus on Thursday 9th June, and be open 7am-5pm Weds-Fri and 8.30am-5pm Sat-Sun.