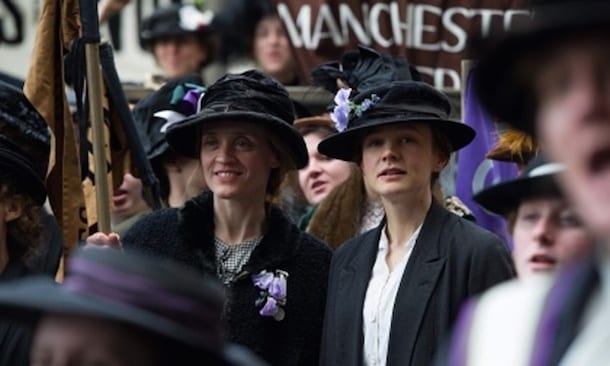 Manchester is steeped in history, not least when it comes to women’s rights. Emmeline Pankhurst was from Moss Side. She worked and lived here and her passion for equal rights grew here. So it seemed appropriate that we should ask our resident film buff Dennis Keighron-Foster to go and see Suffragettes, now showing at HOME…

Suffragette follows a group of radicalised women, tired of oppression, inequality and the failure of peaceful protest as they go underground to organise, become foot soldiers for the feminist movement, and fight for the right to vote.

“Suffragette
is quite simply
– too good”

The film focuses on Maud Watts (Carey Mulligan) as she changes from a person who never gave women’s rights a second thought into a fully blown political activist – a suffragette who is forced to say goodbye to a life she once knew to risk incarceration and even death.

We seem to churn out period dramas as if they were frozen pizzas so I feared the worst. Normally, I find myself constantly thinking ‘they would have never have said that’ or hiding behind my hand when I see another clichéd cockney fishwife, and start writing a French and Saunders parody in my head when faced with an over the top hustle and bustle Victorian street scene.

My cynicism started me off this way, but I soon had to park it. Because Suffragette is quite simply – too good. Every woman and man should see this film.

The plot is quickly revealed and within the first ten minutes I found myself with a tight chest as I watched the women on screen holding their tongues as they witness or experience abuse and all the rest of the atrocities that inequality brings.

Women who held their families together by working long hours in terrible conditions, whose lives are made worse by their lack of a voice and their seemingly worthlessness to society. It’s a truly inspirational story of a growing thirst for justice for women at a pivotal time in our history. 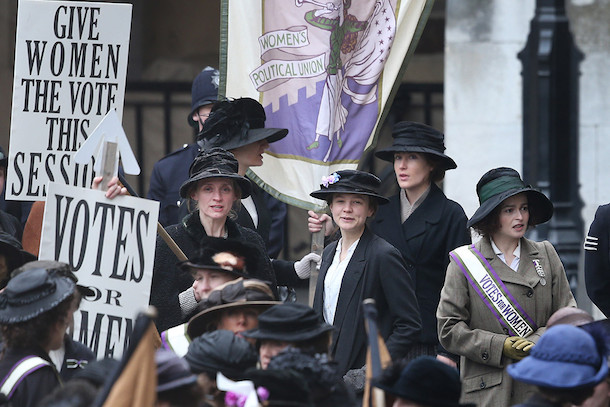 The film examines how men might have dealt with the feminist movement. Most of those who were in power are portrayed as callous and manipulative people who would do or say anything to throw the suffragettes’ motives into question.

You do feel for Maud’s husband, Sonny (Ben Whishaw), however. You get the impression that he wants to be supportive but hasn’t got the willpower or the guts to stand up to the ridicule of his peers. He portrays the sad truth about the apathy of ordinary people and the effects of indoctrination. Don’t question the norm – the risks are too great.

What this film does well is to highlight the differences in how people deal with political activism – whether they are willing to take a stand and fight for what they believe in, support people quietly or completely turn their backs on the people they love to save their own skins.

I really can’t fault this film. Unlike other recent historical films, they haven’t tried to pack it with horrendous events to tug at your heart strings. No, it tells the story quietly, simply and effectively, to great emotional effect. Perhaps this beautiful subtlety derives from a female writer and director team. It is definitely special.

We could be forgiven for thinking that equality has arrived, but equality doesn’t stop at the vote. Women are still paid less than men, are the victims of domestic violence, and are forbidden basic human rights in some countries, so Suffragette’s timing is perfect. Women’s rights are being discussed more than ever, especially as Malala’s campaign for a girl’s right to an education is gathering support. Suffragette and He Named Me Malala could be the start of a true and realistic representation of women on screen and could take the message of equality further.

The most upsetting part of the film is when the credits roll and you see the sad statistics of when women were granted the vote in different countries. The most shocking statistic is that women didn’t get the vote in Switzerland till 1971.

Even worse, to be hit with the sad truth that in 2015, Saudi women are still not allowed to vote. A poignant end to a pivotal film.