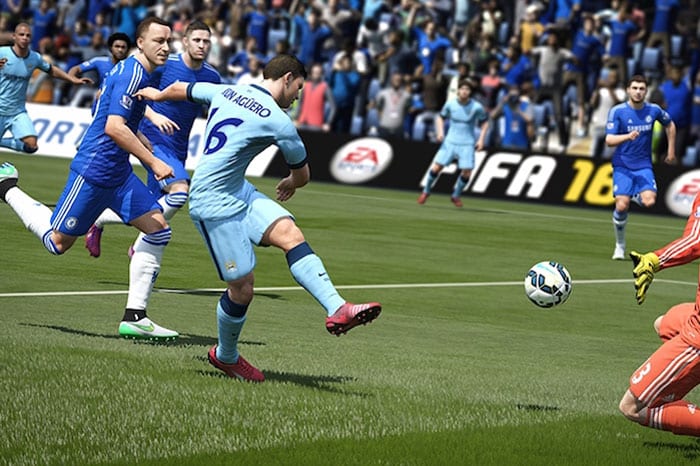 Manchester City’s German international Leroy Sane has not only forced his way into the first team with his blistering performances so far this season. He is officially the fastest Premier League player since records began, having been clocked running at 35.48 kilometres per hour (22.05mph).

But it was the release of the player’s stats on FIFA 18 that stirred up quite the debate surrounding his pace.

His teammate, renowned speedster Kyle Walker, may regret his decision to challenge both Sane and Raheem Sterling to a 100-metre sprint last week.  It came following his discovery that he is ranked lower than the City pair on the new FIFA 18 ratings.

Walker claimed he’s quicker than both of them, to which Sane replied: “He’s faster than me? Maybe if you have to run for one year he’s faster than me!” before dismissing Sterling’s chances of outpacing him, saying: “Raz has too short legs.”

The latest instalment of the video game hit the shelves last week and was causing all sorts of arguments even before it went on sale.

A couple of days after the Blues’ 6-0 thrashing of Watford, he followed up with another tweet showing himself celebrating with Sergio Aguero, David Silva and Raheem Sterling – all of whom have an 82 or higher rating on the game.

During the filming of the City stars checking out their official FIFA 18 ratings, Mendy joined in again, hobbling over with the assistance of crutches as he recovers from surgery, and concludes that his rating must be based on him on crutches.

Perhaps Mendy has taken offence considering Ilkay Gundogan has been given a respectable 85 rating despite missing the majority of last season through injury. The German however, still took issue with his own pace rating of 71.

Reminding people of his 60-metre sprint the night before when City took on Shakhtar Donetsk in the Champions League he says: “71 pace? Did no-one watch the game last night?”

Regardless of game ratings, Sane has exploded into life this season following what City manager Pep Guardiola called a poor pre-season, stating the German international did not deserve to play.

German coach Joachim Low who flew to Manchester to watch his player put in a 5-star performance against Crystal Palace thinks he is progressing well under the guidance of Guardiola and that his man has something extraordinary.

Speaking after being asked about the 21-year-old, Low said: “He already has something extraordinary in the game and that’s speed that is needed internationally.

“I was in Manchester last week and saw the game against Crystal Palace.  Leroy has played very efficiently and has developed a lot.

“I believe Leroy has matured in Manchester in the last year. Thanks to the many games in the physical Premier League, he has developed in terms of assertiveness.

“And moreover, he can make a difference in some games with his speed.  If he continues to develop, he will be very happy to us in the future [sic] ”.