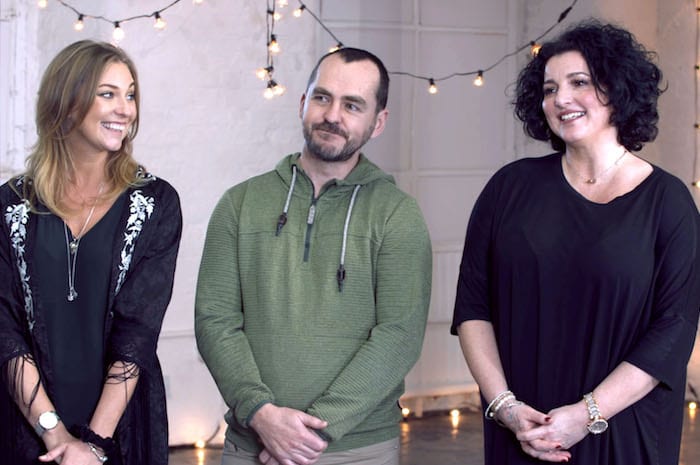 Art can be a very personal thing. Whether you can afford to splurge on big pieces to decorate your home or buy prints via Instagram like me, your home is your castle. It’s a reflection of you, your tastes, the things – and maybe the people – you love.

Home Is Where the Art Is is a brand new BBC show starting this week presented by Nick Knowles in which artists compete to win a special new commission for paying buyers for their home.

In each show, three artists look around a buyer’s home for inspiration before pitching their ideas and creating something unique for them. They don’t meet until the big pitch.

And Salford’s own Fanny Gogh is one of the artists involved. Fanny, also known as Sian Elizabeth, earned the unusual moniker by using vintage knickers in a piece of her artwork, though she’s perhaps more known now for her Manchester United and Lancashire Cricket Club related artworks. I tracked her down to ask her about the whole experience.

How did they get in touch? Did the BBC just phone you up?

I had an email from one of the researchers saying can you give us a call. Someone had remembered me from a charity event. I do get random emails all the time and quite a lot aren’t suitable. I think I must just be on speed dial as ‘that quirky artist!’

It must have been challenging. You don’t even meet the other artists until the day you visit the prospective buyers home?

We knew we were going to meet two other artists but we didn’t know who they were. It was quite secretive like some sort of SAS operation. We were all waiting in cars outside the home of the people who wanted to commission a piece, and they set up all the cameras inside as they wanted our reactions to be our true reactions, to be fresh. We all went in one by one. I walked in and recognised one of them, which was a nice shock. I obviously can’t say who.

They filmed us chatting in the hall and then we had to walk into the back room of the home where there was a board which gave us the brief.

So you don’t get to meet the buyers?

No, but we did have had time to go through every single room in the property to try and understand who they were, what their tastes were, what they’d like, all without meeting them – all separately. It was an intense day.

And then you go away and come up with an idea?

Exactly. Over the next few days we had to come up with a piece to reflect what the buyers wanted – even down to them filming me in the pub I sometimes go to with my husband. It’s a real, old traditional pub with a log fire. I go down there sometimes for inspiration. There are some amazing characters there, so if I’ve got projects on I’ll sit with my notebook and ask them questions. What I get back is just outside the box. They filmed me there, at home, in my studio doing my own art.

And three weeks later, one by one, we pitched to the buyers, who we met for the first time.

That must have been nerve-wracking

It was. And we could see each other’s pitches, which was amazing. They filmed our reactions, so you can see it all. We had no idea what everyone else’s pitches were going to be, so it was so good to see what everyone came up with.

I know you can’t tell us anything really, but any hints?

What I can tell you is that they had to eliminate one artist. So two artists went ahead, so that the buyers could see what we would produce – but other than that, you’ll have to watch the show!

Home Is Where the Art Is is on BBC One at 3.45pm on weekdays. You can catch Fanny’s episode on 17th April.