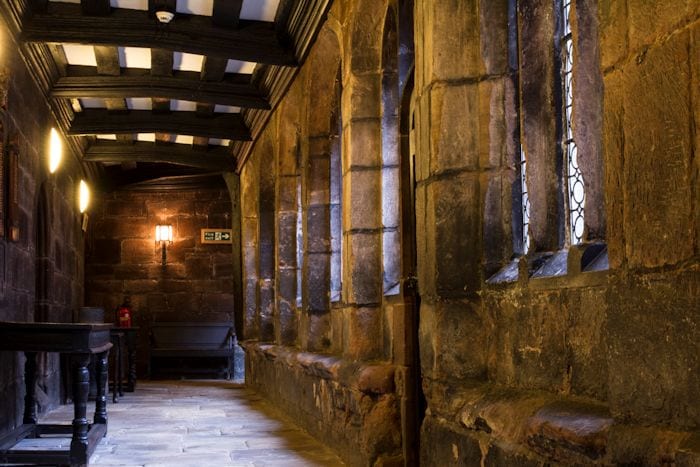 Manchester’s oldest building, and the oldest public reference library in the English-speaking world, Chetham’s Library has been open continuously since 1653.

It’s a magical space, but visitors have not been able to wander freely through the Library after hours without a guide – until now.

Now, you will be able to explore this richly atmospheric space in your own time. The self-guided experience, without a tour guide or any formality, offers the chance to absorb the atmosphere and linger in the rooms without being moved on or given a lot of historic information.

Parts of the building not normally open to the public will be accessible – from secret staircases and stone passages to cobbled courtyards. The pathways will be lit by lanterns and twinkly fairy lights.

There will be various surprise ‘incidents’ throughout the building to discover and enjoy, including books from the collection to read by lantern light and illuminated corners and objects not normally seen.

Afterwards, head to the historic Baronial Hall for a glass of wine and the opportunity to meet the staff and curators of one of the most ancient buildings in the city centre.

Established as a library in 1653 by Humphrey Chetham, Chetham’s occupies the medieval buildings erected in 1421 to accommodate the priests of Manchester’s collegiate church (now Manchester Cathedral).

In accordance with Humphrey Chetham’s instructions, newly acquired books were chained to the bookcases – a practice abandoned in the mid eighteenth-century and replaced by the gates you see today.

The Library was the meeting place of Karl Marx and Friedrich Engels when Marx visited Manchester in 1845, where they carried out the research that ultimately led to The Communist Manifesto.

The collections range from illuminated manuscripts made for royalty through to documents which record the minutiae of everyday life such as letters, diaries and account books. It’s also home to the oldest history of Manchester – Richard Hollingworth’s 1656 autograph of Mancuniensis – as well as the first ever census of Manchester, compiled in 1773–74.

Earlier this year, Chetham’s Library was named as one of the most important places to England’s cultural identity in the country, along with The Haçienda.

“We are very excited about this new event, which has been designed for visitors who don’t necessarily want a guided tour, and would like to wander through the building at their own pace,” said Chetham’s Library heritage manager Sue McLoughlin.

“The Library is an independent charity and we rely largely on donations. All proceeds from this event will help us to preserve Chetham’s Library for future generations.”

The first Chetham’s Library Unscripted tour takes place on 1st November, with additional tours on 6th December, 17th January and 14th February. Tickets are £20, including a glass of wine.