Selina is a lifestyle, travel and community platform taking the global hospitality market by storm.

When the news first dropped that it had snapped up a huge swathe of Manchester’s Northern Quarter, the reactions were mixed.

After all, the Northern Quarter has always staked its reputation on being fiercely independent – and a fair few locals were upset that some of their favourite old haunts might be set to change.

But after going down to see it for ourselves this morning, we’re here to bring you some good news. Selina may be a big company, but they certainly care a lot – about sustainability, about supporting local independents and creatives, and about giving back to the community.

The company’s takeover of Hatters’ £30m UK property portfolio has seen them not just scoop up the group’s Hilton Street hostel but also take over popular NQ bars including The Patron, Holdfast and Irish bar The Corner Boy. And they’ve got some big plans in store for them.

Nomadic living is at the heart of the concept which endeavours to create a ready made community for Selina’s guests to drop straight into local life through a network of trendy co-working spaces. 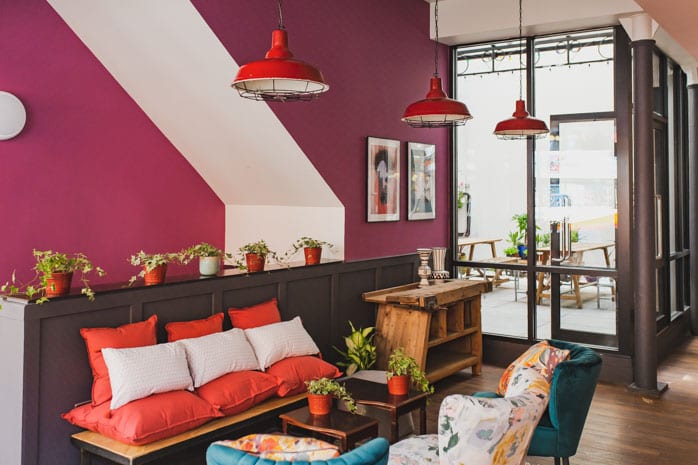 As of today, The Patron officially reopens as Wilson’s Social with a new food and drink menu offering dishes from around the world. In a month’s time, they will reveal a new all-singing-and-dancing basement nightclub downstairs which will be open to 1am on weekdays and 3am on weekends.

Next door at The Corner Boy, some design elements are set to change but the Irish American pub will continue to serve classics like Irish lamb stew and host a range of themed activities.

And at Holdfast, they’re looking to incorporate Selina’s roots into Manchester’s nightlife scene with a new Latin club.

Upstairs, the rooms have a distinctly bohemian feel with plenty of lush green plants, mixed pieces of antique and repurposed furniture, and local artists’ work on the walls.

The theme continues in the hallways, with more murals and hanging plants giving it a cool and vibrant feel.

All the furniture from the hostel’s takeover has been repurposed and upcycled by a mixture of local designers, builders, craftspeople and artists at their workshop ten minutes up the road – and they’ve sourced the rest from local charity and antique shops. 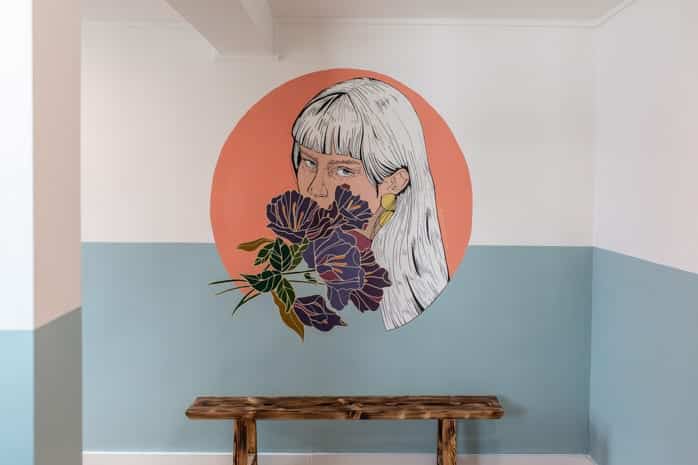 And the company has also reached out to an array of local and Manchester-based artists to commission murals and other installations to give both the hostel and the bars beneath it a Mancunian edge.

In total, the hostel features 37 uniquely designed private and shared rooms with prices starting from just £30 per person.

At the other end of the scale, top-tier suites will set you back £120 a night – well worth it when you consider that Sacha’s around the corner charges £99.

Some rooms are dormitory-style with nifty bunk beds fitted with USB plugs and personal lockers to keep your belongings safe, others are fully kitted out private rooms complete with their own kitchen and lounge area.

There is also a selection of rooms that sit somewhere in between, ideal for families or for a few friends to share.

And keeping to focus on sociability and community, they’ve also created a gorgeous common room area for guests to socialise, read, cook and watch films in, with a projector to facilitate proper movie nights.

As well as creating new lifestyle spaces for guests to relax, work and socialise in, they are also creating a programme of activities and experiences for guests (and locals) to try including weekly virtual reality meditation, beauty and wellness workshops, and brunch entertainment.

For this year’s Manchester Pride, we’re told they will be putting on a big event including a charitable bottomless brunch where guests will be served by local drag queens. The weekend will also mark the opening of the downstairs nightclub, with a special set from LGBTQ+ collective Sink The Pink.

At the moment, most of Selina’s establishments are in Latin America but the move to Manchester is part of a wider plan to expand into Europe. With 54 locations currently open across the globe, and plans to open many more over the coming months, they are a company on the up.

It all started, we’re told, around the small Panamanian fishing town of Pedasí. Selina’s founders were running some real estate projects there at the time and built their first destination from nothing.

“They created this little community up in nearby surf village Venao. They created a coffee shop, then they created a restaurant, then they got the surf club, then another place, and they really created a tourist destination, integrated with the community, when there was nothing in the place.”

“Now that we’re coming into Manchester we want to support and connect with the local community and have the traveller really integrated with that.”

The company is conscientious to its core and is looking to connect its staff, guests and neighbours with volunteering opportunities to give back to the local area.

“We try to work with the community and to help the community, and we have different activities around the area,” says Lorna Keller, Selina’s interior designer.

“For example, the last one was to pick up all the rubbish on the streets because Selina has an impact on the place, on the neighbourhood, so at the same time we want to help and create something nicer or cooler. It’s not just the property, it’s so much more.”

Selina will be adding a second Manchester location later in the year on Newton Street as well as a co-working hub to support local enterprise.

And, in addition to the UK openings, 2019 will see Selina open a further 31 properties in Germany, Portugal, Greece, Israel, Argentina, Chile, Brazil and Mexico.

With an ever-growing network of establishments stretching across the globe, the new and improved hostel looks set to attract a host of nomadic millennials to Manchester.

We think it sounds great.