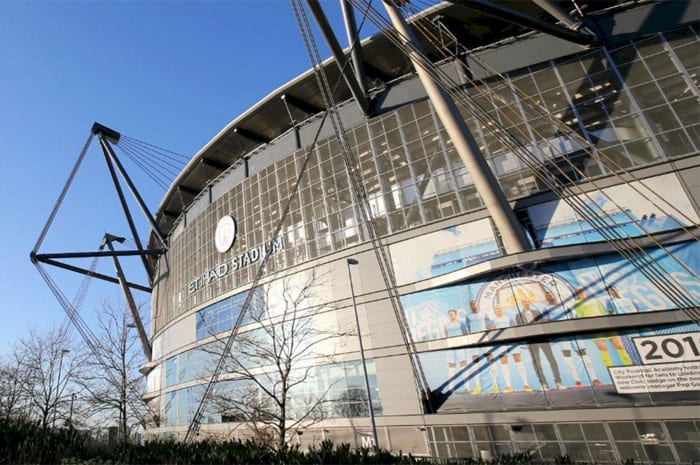 Manchester City’s Etihad Stadium has been named the best in the world, based on fans’ match day experience.

The ground, centrepiece of the Etihad campus in east Manchester, was rated ahead of the Nou Camp, home of Barcelona, and Bayern Munich’s Allianz Arena in a study by footy.com across a range of factors including transport links, eco friendliness, availability of smart technology and the price of a pint.

The competition was restricted to clubs which are champions of their respective leagues, which meant that grounds like Manchester United’s Old Trafford, Liverpool’s Anfield and the new home of Tottenham Hotspur didn’t get a look in.

Nonetheless the accolade for the Etihad comes as another boost for the club that won everything available on the domestic front last season. City became Premier League champions, FA and Carabao Cup winners – and the Community Shield is also on the sideboard in the boardroom.

The Etihad – formerly the City of Manchester Stadium – was built for the Manchester Commonwealth Games of 2002 as a scaled down version of an 80,000-seat design conceived as the centrepiece of the city’s bid to host the 2000 Olympics, which eventually went to Sydney.

The project was later revived as a contender to be the national stadium after the closure and demolition of the old Wembley Stadium.

But a combination of political determination to keep the national stadium in London and the Football Association’s acquisition of Wembley – a classic stitch-up – ensured the new Wembley would win the so-called “competition”.

The new Wembley cost a staggering £798 million (£1.17 billion at today’s prices) and was completed in 2007 – years behind schedule. The City of Manchester Stadium came in on budget and on time to stage the massively successful Commonwealth Games of 2002.

The stadium’s capacity for the games was 35,000, but within days of the spectacular closing ceremony, the temporary stand at one end was removed and plant was deployed to remove the running track and dig down another tier.

When the temporary stand was made permanent, capacity was increased to 45,000 and has subsequently been further increased to 54,000. There are plans to raise the capacity to 60,000.

Key to the development of the stadium was the deal stuck in advance between Manchester city council and Manchester City FC that the football club would move there from its old ground at Maine Road in Moss Side after the Games. Maine Road has since been demolished and redeveloped for housing.

It is widely believed that the new, high-tech stadium was a key factor in Sheikh Mansour of Abu Dhabi’s decision to buy Manchester City rather than Everton in 2008 when seeking to invest in an English football club.