If you’ve seen the posters around Manchester or doing the rounds on social media, you may be asking: just what is Escape to Freight Island?

Now, details have been revealed – and the new venture is described as “an inspiring urban landscape where an outdoor food market, art space and terrace-style seating collide on one sprawling tract, a long-forgotten freight depot carved from the city’s industrial past.”

Located at Depot Mayfield, part of the £1.4bn regeneration of Manchester’s Mayfield district, Escape to Freight Island will open in mid-July.

So what exactly can we expect? 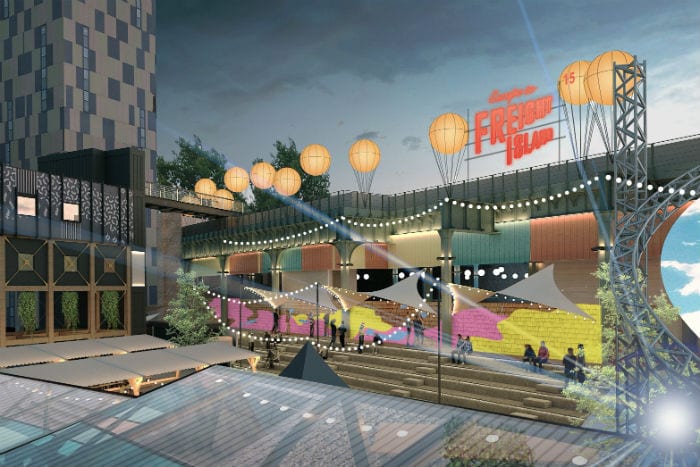 As well as various bars, restaurants and food trucks, there are plans for retail space and a bike park. There will be a 70s New York-inspired roller disco, a hidden high-fi audio bar which will transform into a karaoke venue called Queen Samantha’s, and a retro arcade games corridor.

One of the first food traders will be Madre, who specialise in modern tacos. Voodoo Ray’s Pizza will launch a northern outpost following their success in Peckham and Dalston, offering giant 22-inch New York-style pizza served by the slice.

Closer to home, Ramsbottom’s pioneering Baratxuri will hold court in the outside space with a wood-fired ‘Asador’ grill, roasting large cuts of meat and whole fish.

When it comes to drink, Escape to Freight Island will be Camden Town Brewery’s biggest collaboration outside of London, launching a boutique craft ale bar in partnership with Salford’s Pomona Island brewery.

This will run alongside a specialist wine bar and a cocktail space from the team behind Ancoats bar The Jane Eyre. 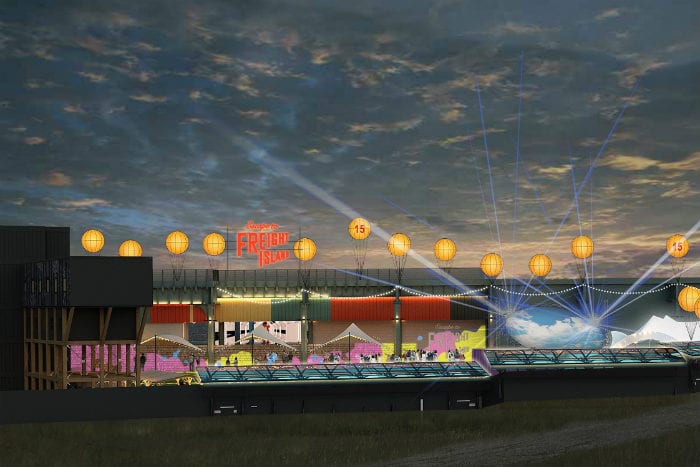 Escape to Freight Island will also host a ticketed events programme, with free entertainment 12 hours a day. There’ll be festival takeovers and collaborations with the likes of Homoelectric, We Out Here festival, Festival N°6, Love International and other musical curators.

Opening in mid-July, the first area to open will be dubbed ‘Platform 15’, a tip of the cap to neighbouring Piccadilly Station. It has been designed with social distance at the forefront of its operations, with a ‘Safe + Social Manifesto’.

The launch of phase two is planned for August, increasing capacity to 1,000 people with social distancing measures remaining in place. Once restrictions are lifted, the venue will switch up to a capacity of 2,500 people.

The team behind the venture includes Justin Crawford and Luke Cowdrey of Volta, Electrik Bar and The Refuge, Gareth Cooper of Festival N°6, event production veteran Jon Drape of Engine No. 4, and Dan Morris, who launched Manchester music venues Gorilla and the Albert Hall as well as some of the city’s favourite bars and restaurants.

“It’s a new and unique destination in Manchester, it is the next evolution in the food market sector that will fill a hole in the life of our city. Escape to Freight Island will take its place as one of the most exciting, forward-thinking and disruptive markets in the world.

“Platform 15 will give a flavour of what is to come when we launch the full Escape to Freight Island experience, so let’s all meet at Platform 15 to begin our escape to freedom.”

Escape to Freight Island will open in mid-July. Bookings will be open next week, and you can sign up to be given a 24 hour advance notice for tables. Table slots of three hours will be pre-booked from Thursday to Sunday, running from midday to midnight.