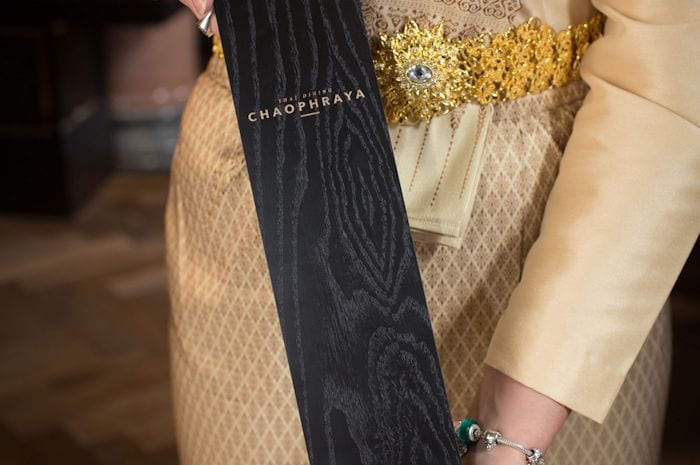 “What part of slow down don’t you understand?” screamed Mrs K as the longtail dragon boat – powered by what looked like a lorry engine driving a long propeller shaft – hurtled down the Chaophraya River that divides Bangkok.

Well, none as it happened, even if the barefoot skipper had been able to hear her cries over the roar of the motor and the swish of the bow wave.

Manchester’s long-established Chaophraya restaurant, which takes its name from the river, offers a calmer but nonetheless exhilarating culinary ride through what we have come think of as one of our favourite of all world cuisines – that of Thailand. 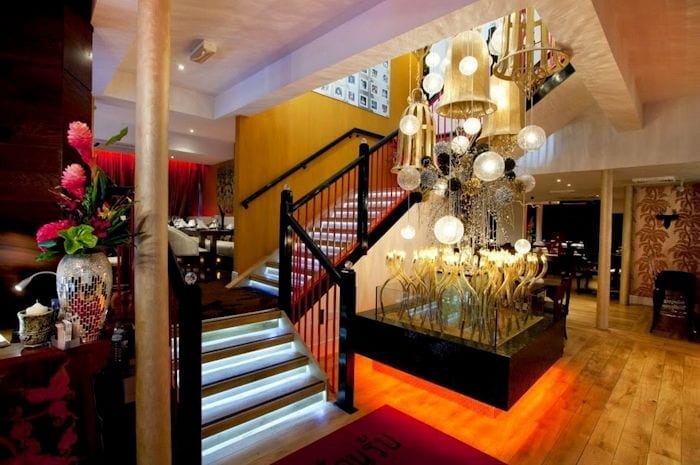 I’ve been fortunate enough to enjoy Thai food in several places – whilst curling my toes in the white sand of beaches in Koh Samui and Phuket, in bustling street markets and in a smart hotel dining room with panoramic views of Bangkok.

Fine dining at Chaophraya falls into the latter category – but without the views, of course. 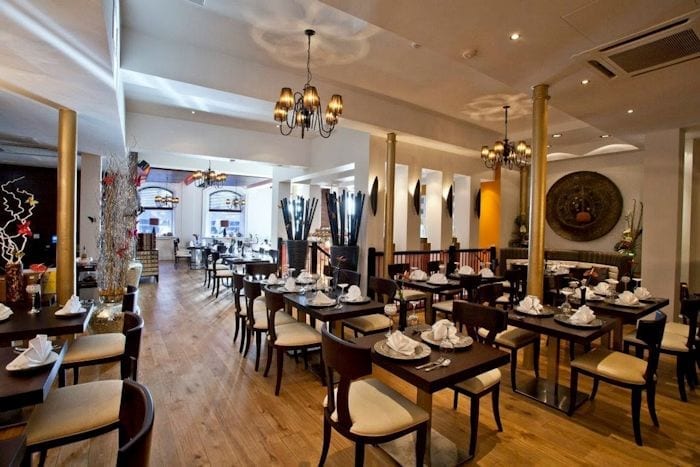 The restaurant, in a listed 19th Century building on Chapel Walks, boasts a spectacularly elegant entrance and the look of the ground floor dining area, all dark wood, white walls, pendant lighting and Victorian arched windows, reminds me of the Eastern and Oriental in Penang.

There’s an equally atmospheric dining room on the floor above and a couple of beautifully appointed private dining areas. If it’s street food you want, the Chaophraya group covers that base with its sister restaurant in Spinningfields, Thaikun.

The menu features favourite dishes which have become familiar in the couple of decades since Thai food deservedly became popular in the UK. Starters like chicken satay and fish cakes. Mains like chicken green curry and prawn red curry.

But Chaophraya’s offerings demonstrate a much wider choice with elaborate and exotic salads, stir-fries and dishes from the grill and steamer.

After some debate – since our intention was to share every dish we ordered – over a generous bowl of crunchy prawn crackers served with piquant dipping sauce, we chose to start with Thai Chicken Tacos (£7.50) and Soft Shell Crab and Prawn Tempura (£12.50). 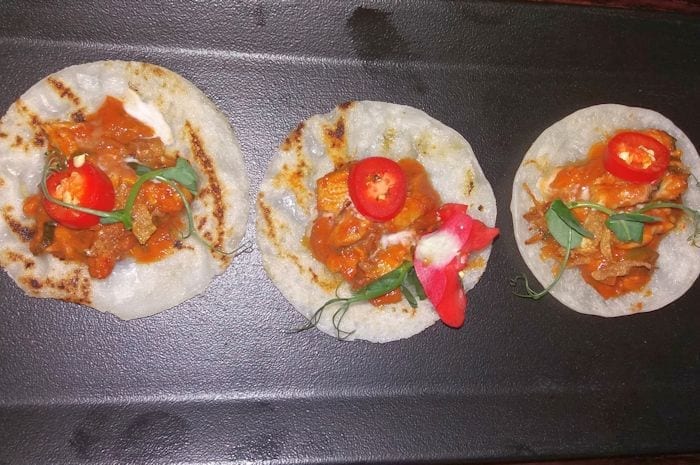 With all due respects to Jeremy Clarkson’s best friends in Mexico, a similar dish in your average cantina would have weighed in twice as heavy and been a fraction as subtle. 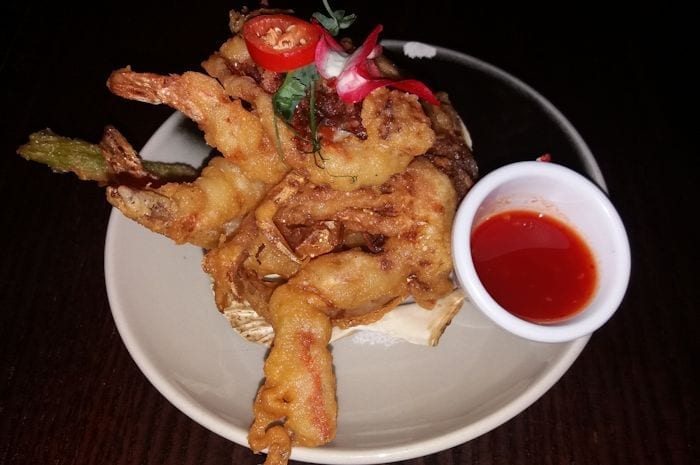 The shellfish in their delicate crispy tempura batter were a treat, the crab especially superb in flavour and equal to the accompanying sweet chilli dip.

For mains we opted for Massaman Lamb Curry (£14) and – after cogitating over Crispy Pork Belly with Thai Basil or Weeping Tiger Sirloin Steak – chose Duck Tamarind (£15.50). 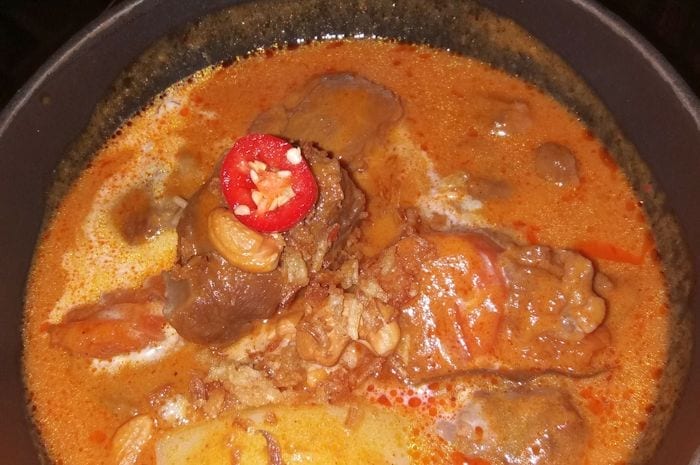 The lamb was a delight, pieces of meltingly tender lamb stewed with massaman curry, a Thai take on what’s thought to be originally a Persian dish brought to south east Asia by Muslim merchants in the 17th Century.

Whatever, this was light, mild, rich and silky as you like, with subtle hints of cardamom, turmeric, cinnamon and star anise, cooked with coconut milk, carrots, potatoes and baby onions and topped with cashew nuts. 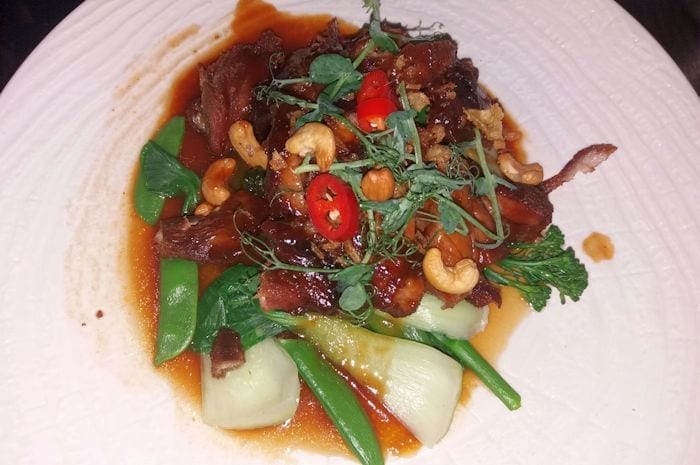 One side  dish of  Steamed Jasmine Rice – ample for us – added £3 and the wine, unoaked, refreshing South African Capes Heights Chardonnay from a well food-matched list, came for a reasonable £19.50. 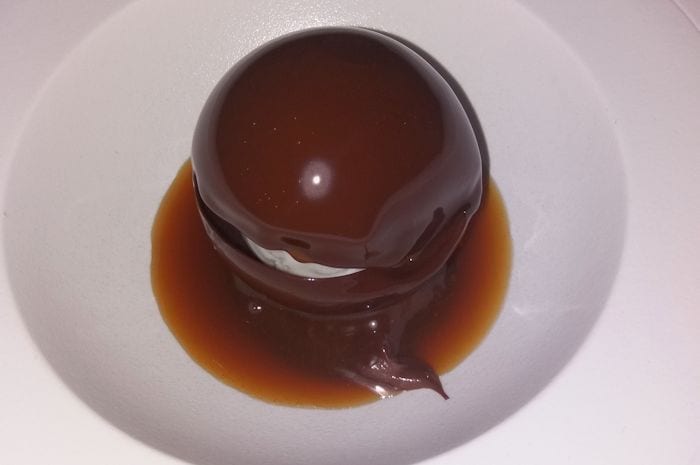 Dessert saw a parting of the ways. Mrs K cooed over a Chocolate Bombe (£7.50) with Thai whiskey ice-cream, honey and toasted sesame popcorn enveloped in a sphere of melting chocolate and served with hot caramel sauce.

I finished off with man’s pudding – a glass of concentrated, juicy Malbec.