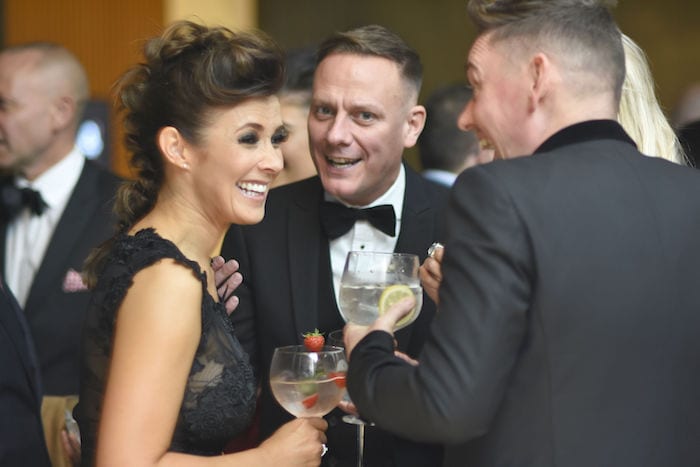 The brainchild of entrepreneur Dean Mason, the event was set up with the help of his team in the hopes of raising thousands of pounds for the hospital through a grand prize auction and raffle during the evening.

Last year, the event raised £7,000 for the cause. This year, the amount raised more than tripled, reaching a staggering £21,720.

Guests were entertained by a host of live acts. 2014 X Factor winner Ben Haenow performed a medley of popular hits including some of his own original tracks and was a big hit, with everyone queueing up to grab a selfie with the singer.

Keeping the comedy levels up was popular Geordie performer Chris Ramsey who had guests in fits of laughter with his quick wit, whilst 2017 X Factor contestant Benji Matthews gave a sassy performance of some classic tunes along with his first debut track. Strutting around the stage, he got the whole audience involved in a singalong version of Amy Winehouse’s classic Valerie.

Kym Marsh’s daughter Emilie Cunliffe also performed for the occasion, with her stunning vocals setting off the evening’s events. Bringing the party vibes after a night full of fundraising was Girl on Sax and DJ Mark Jay.

Green Cloud first got involved with RMCH last year for their Many Hands fund raising campaign, getting to the final with Atlas Bar. This year they joined forces to put on the Emerald Ball together, building a great relationship with each other and the hospital too.

Host Lorna Bancroft said she was blown away by the incredible auction prizes that were donated and how generous everybody was on the evening.

“It was such a great atmosphere from start to finish and Dean should be really proud of himself! The Hilton is always a fantastic venue for these events and The Atlas Bar smashed it with the welcome drinks and afterparty. You can’t beat a variety of G&T!”

“From start to finish the entertainment was simply perfect and the guests had a thoroughly fabulous evening,” said Lorna. “Emilie Cunliffe, the beautiful daughter of Kym Marsh, had the voice of an angel. And Josh Hindle really got the party going with his Michael Bublé style. I didn’t want his set to end.

“My favourite was probably the gorgeous Ben Haenow. He had everyone up dancing and singing and was great fun. Chris Ramsey had a hard task ahead as everyone was super giddy by the time he came out, but he totally dominated the room with a hilarious set. I wish I could do it all again next week.”

During the evening, one very generous guest made a huge donation of £10,000 to the charity fundraiser. She took to the stage to announce that GovData were donating the money in memory of Jake, a child who lost his life at a young age.

“Royal Manchester Children’s Hospital is an absolutely fantastic cause to raise money for,” Katie McGlynn told us. “I couldn’t think of a more worthy cause and I’m proud to show my support for the Emerald Ball and its charity partner.

“The event was great. We had a thoroughly enjoyable evening, albeit slightly emotional. It’s always very hard to listen to the heart-breaking stories from patients of the Children’s Hospital but it just shows how important our donations are and who they are helping to support.”