Young people are sometimes accused of being lot of talk and little action, but a group of digital marketing students in Manchester is proving that’s a lot of hokum with BeeHydrated, an environmentally friendly water bottle they’ve created and designed to raise awareness, as well as money, for the LGBT community.

“Just a few weeks ago, I set my students a group project for their assignment, which was to come up with a hypothetical business, a product, with branding, a marketing plan, website, social, everything I’d expect a digital marketer to be able to do as if were to launch it tomorrow,” says tutor Fran, who teaches digital marketing at The Growth Company.

The students put their heads together and discussed what was happening in the world, the headlines that have been reverberating and the causes requiring steadfast action.

With more people than ever becoming aware of the detrimental impact of single-use plastic, the idea of creating an eco-friendly water bottle emerged. 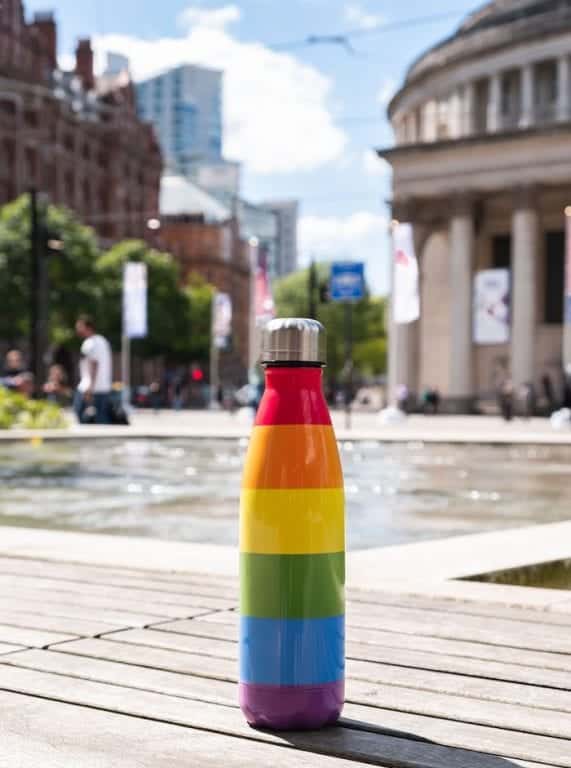 “I was in Australia and that’s where I first saw these reusable water bottles being used on a huge scale. They’re so far ahead of us with regards to single-use plastic. We got talking in the group and realised there was a gap in the market to do something,” says student Isobel Hardcastle, 24.

But they didn’t stop there.

“Towards the end of the task, Fran asked us what would we do next, if we were to take the product out into the real world? One of us said we’d probably move it into a bigger project where we’d partner up with a charity. So, we did some searching and found that no companies did a Pride bottle,” recalls fellow student Grace Brocklehurst, 18.

“You’d think there would be a product like this already so we were surprised we couldn’t find one anywhere,” adds Louise Shaw, 17.

“When we decided on doing a LGBT one, everything sort of blew up. That’s been our focus and the interest has been amazing.”

The finished product is a stainless-steel reusable water bottle with two custom prints, the rainbow Pride flag, and the trans Pride flag, which they’ve made a reality through start up funding secured from a business plan they presented to The Growth Company.

“They’ve been very supportive of it and from an apprenticeship provider point of view, it’s such an innovative way to approach their education, to make it real-life,” says Fran who’s also provided them with some start up funding.

“I believe in it so I’m more than happy to,” she says. “To see them flip something hypothetical and transform it into something which is financially viable is amazing.”

They’re now selling the bottles for £12 each at beehydratedmcr.co.uk with 60% of all profits going to the LGBT Foundation in Manchester.

“The students wanted to do something that really feeds back into the community,” says Fran who got married a few weeks ago.

“My students worry about me, which is fascinating. It’s my job to worry about them but they’re concerned as a happily married gay woman that something bad will happen (to me), so they want to protect everybody and do something that’s going to make a change. I’m the proudest teacher for sure. Academically they’re phenomenal, but creatively even better.”

Isobel admits the research they’ve conducted as part of the project has been eye-opening.

“Personally, it’s not something I’ve known much about. It’s from doing this that I’ve realised how serious the issues are, the rise in hate crime and homophobic attacks, so it feels nice to be raising awareness for the amazing LGBT community and I just think it’s really cool we get to help the environment as well.”

It’s no mean feat they’ve managed to build a product from scratch in little over a month.

“We all have full-time jobs other than here so we’ve just been smashing it in our spare time and in class (on Fridays) but because it’s something we all care about, none of us find it a chore to work on so we don’t mind putting in the extra hours after work,” says Grace.

The team’s hosting a launch on 8th August at Clink Café, where they’re keen to spread the word and add to the orders they’ve already secured from local bars and businesses.

“It’s daunting and exciting. I don’t think anyone of us imagined it would get this big so quickly,” notes Grace. “But it’s lovely to see people get behind it.”

Part of the team’s rapid success is not only due their determination but the fact they’re each bringing a different skillset to the table, and without the squabbles witnessed on the likes of The Apprentice.

“We all work really well, and it’s been very collaborative, a real team-based project,” says Thomas Harris, 23, who’s used his knowledge of coding to create the website.

“We’ve kept it pretty simple as we want to make sure people can get to the product, know who we are and what we do and click on all the accessible links, so it’s user-friendly. We don’t have a lot of time until the Pride event so just want to make sure everyone’s happy with the bottles they receive.”

And that’s meant reining themselves in at times.

“We weren’t expecting it to move so quickly, so we’re just taking it step by step and making sure we’re not biting off more than we can chew. We just need to keep our cool and take it as it comes,” says Louise.

And Fran admits that part of her tutoring has been “about controlling their passion because they’ve got such beautiful big ideas”.

At first, the team just want to concentrate on Manchester “but then there is the potential to go onto other Pride events so expand out across the UK,” says Thomas.

“We’ve jokingly said we’re going to leave our jobs and do this as a full-time thing, you never know but we just hope it goes really well.”

“This is something that started as a group project and is relevant to their course, but I know is something they’ll continue to do regardless,” says Fran.

“This is their passion project most definitely.”