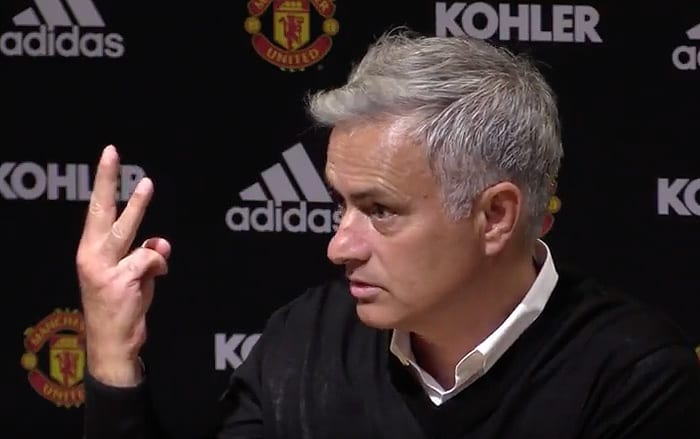 It all started so well last night. A good first half performance. Great atmosphere. Then the wheels came off. Beaten 3-0 at home by Spurs.

Then Mourinho demanding more respect at his post-match press conference, because he has won more titles than the other 19 Premier League managers put together.

Right now United are in 13th place, below Fulham, Brighton and Palace.

I know it’s early doors. Back in the old days they didn’t even publish the tables until four games had been played. And I know we started the 92/93 season with two defeats and a draw and were bottom of the table for a while.

But that season we ended up winning the Premier League. This season, we have no chance of getting anywhere near the title. We’re 80/1 with the bookies. And that looks generous.

The worrying thing for the club is that at the moment we look unlikely to qualify for a Champions League place. And that is the minimum the club requires from the manager. It’s why Louis van Gaal was sacked, despite winning the FA Cup.

Missing out on a Champions League place would hit the owners where it hurts. In the pocket.

That’s why failing to qualify for the Champions League would mean trouble for the club – and Mourinho.

He has a clause in his contract that guarantees him a lump sum of £12m if he is sacked. But it would make economic sense for the club to sack him and pay him the £12m if they could find someone to replace him who could get a top four finish. The longer they wait, the more difficult that becomes.

The next few games are as follows: Burnley (A); Watford (A); Wolves (H); West Ham (A); and Newcastle (H). Quite an easy run in normal circumstances. Not any more.

And then on 20th October it’s Chelsea away. That’s going to be a huge game, assuming Mourinho is still in a job.

So how long will it be before the owners lose patience and sack Jose?

While there have been plenty of negative off-the-field reports following disappointing performances and results against Brighton and Spurs, it’s clearly not affecting United’s price on the stock market.

United’s value has reached a record high. The share price has rocketed to a record £18.50 per share, meaning the club is now valued at £3.1billion – a nice profit on the £800m the Glazers paid for it.

And there’s a nice new pink shirt out today which should make the club even more cash.