Dinosaurs have taken over Wythenshawe Park for the summer 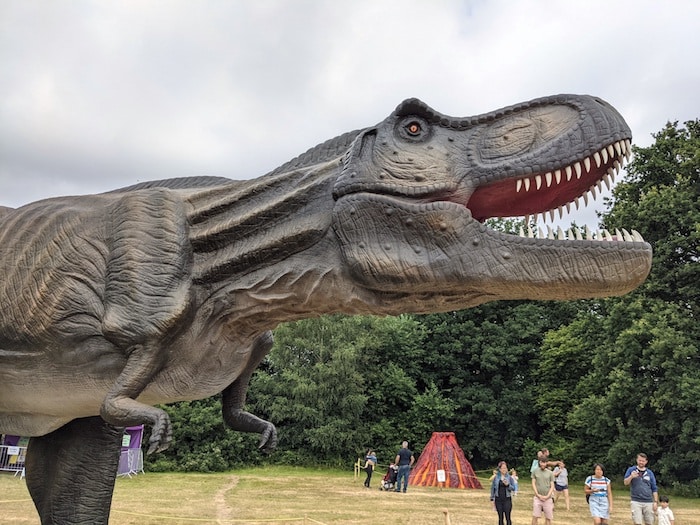 What do you get if you cross a dinosaur with a pig? Jurassic Pork…

Making the most of a glorious Monday morning, we took a trip millions of years into the past in search of something big, scary and exciting.

The lush green space of Wythenshawe Park has become home to a flock of dinosaurs as Dino Kingdom has taken up residency for the summer. It’s a family experience which brings dozens of prehistoric creatures to life. 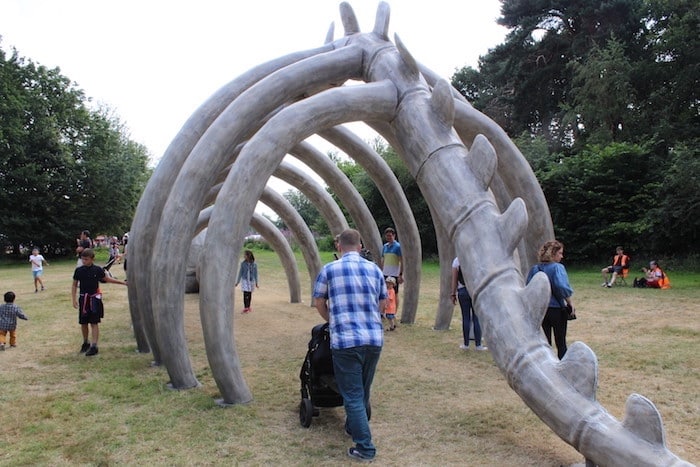 Approaching the entrance, you’re greeted every few feet with a dino-joke. We played ‘guess the punchline’ before seeing what it really was a few feet further on.

Cheesy dinosaur jokes may be our new favourite game.

As soon as you walk through the gates, you are greeted by the towering figure of a brachiosaurus eating from the treetops, whose roars can be heard from far away. 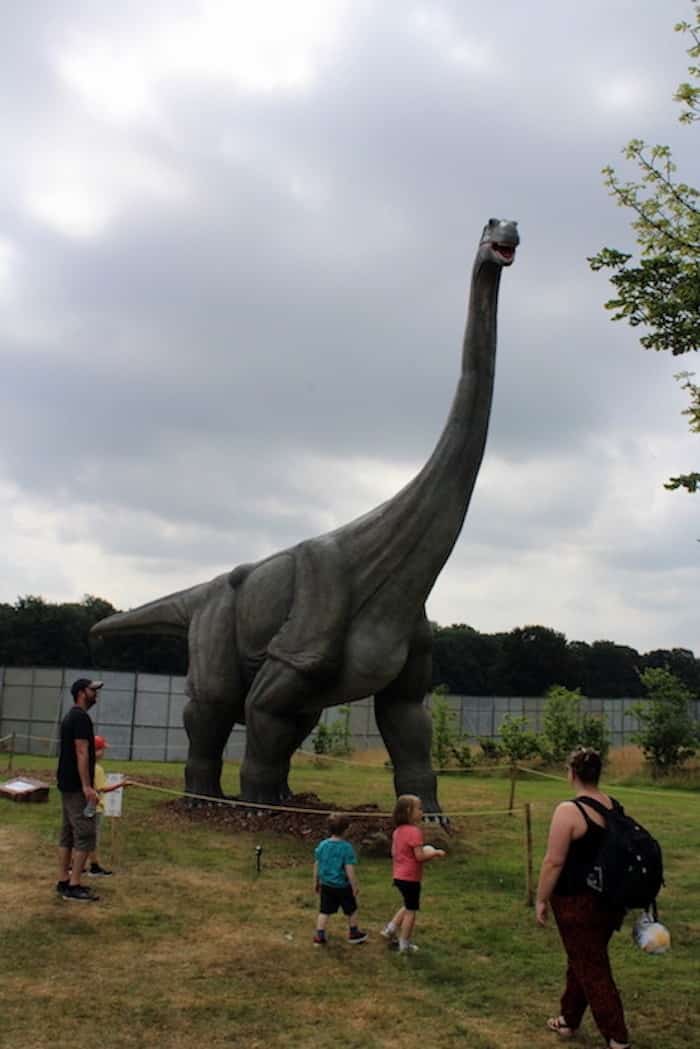 Taking in all the sights, our young dinosaur hunting companion was spoilt for choice as to where to go next.

A huge baryonyx stood watch, roaring at anybody who comes near; the mechanics are nicely subtle, standing in silence for long enough to draw you into a false sense of security before you are spotted – then he roars and opens his mouth, baring teeth and scaring you away.

Using the official Dino Kingdom app you can check-in at some of the dinosaurs, giving you more information including when they lived, what their names mean and what they ate; did you know dilophosaurus means ‘two-crested lizard’? 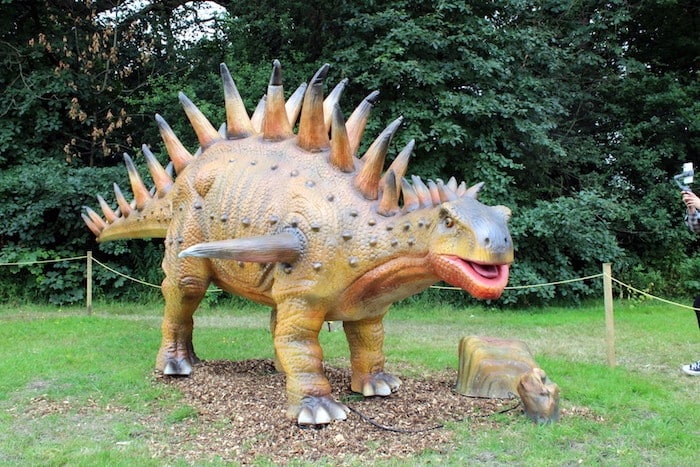 The app’s AR function also allows you to follow an Egg Hunt all over the park. Finding these gives discounts at various concessions and activities across the kingdom, so we took part in a fun treasure hunt trying to get them all.

As for those extra activities, there is plenty to keep you busy.

We had great fun searching for long-lost dinosaurs in the fossil sand pits and putting together a fabulous looking creature in the dino creator. Probably wouldn’t make it into the Manchester Museum’s dinosaur displays, though. 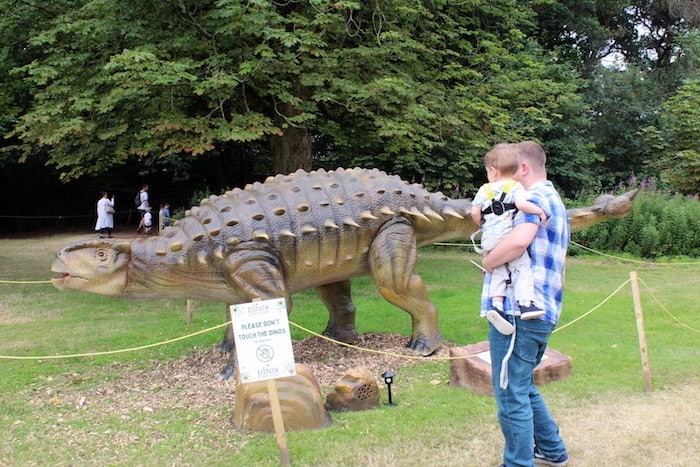 Stopping for lunch, there’s a great selection to choose from, suitable meals for any meat or veggie-saureses, young or old.

Away from the beaten path of the dinosaurs, a woodland walk has creatures of a different type – but as old and as scary as their bigger counterparts.

We won’t spoil the surprise, but we found some very creepy crawlies from 400 million years ago.

Once you’ve seen every beast and creature, you can finish your visit in the fairground, excite yourself some more and exhaust that last bit of energy.

We waved goodbye to our new animatronic friends, enjoyed a car ride or two and even won some prizes hooking a duck. 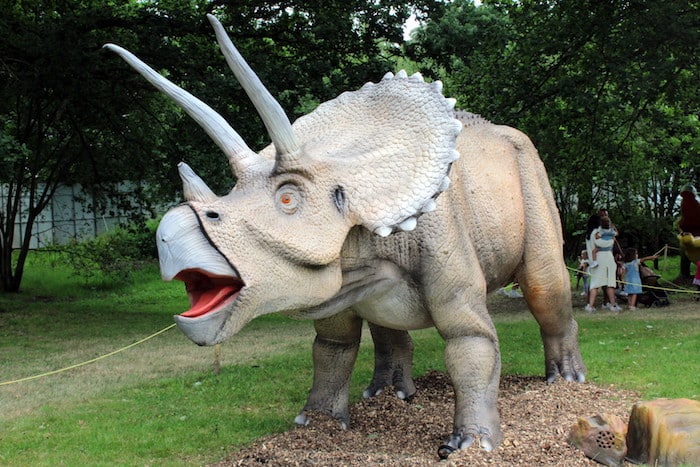 If you didn’t know better, with the sun shining, you could actually be on holiday. But then a pterosaur shrieked and we were brought back to Wythenshawe.

There is so much to see and do at Dino Kingdom.

Your ticket gives you three hours of access, which is enough to see every exhibit, have some lunch and take part in any number of activities. 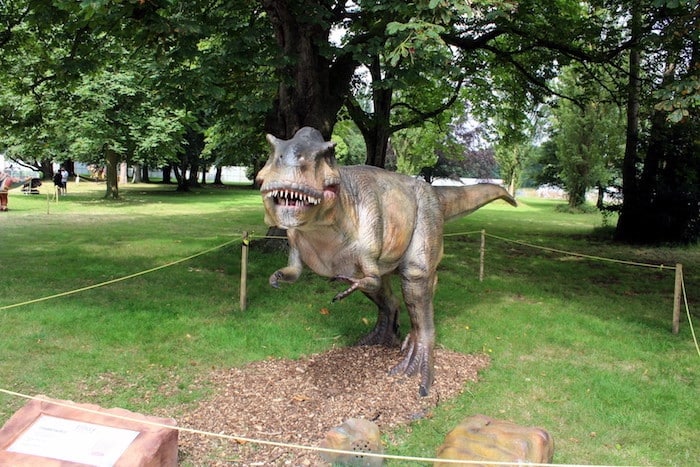 Signs were around the entrance stating the day was sold out, so we expected lots of crowds and bustle to see the dinosaurs – but this wasn’t the case.

There are plenty of restrictions in place, the park is large enough to house a horde of giant creatures and giant families giving space for all to roam around equally freely.

Just beware of the rampaging T-Rex when queueing for your lunch! 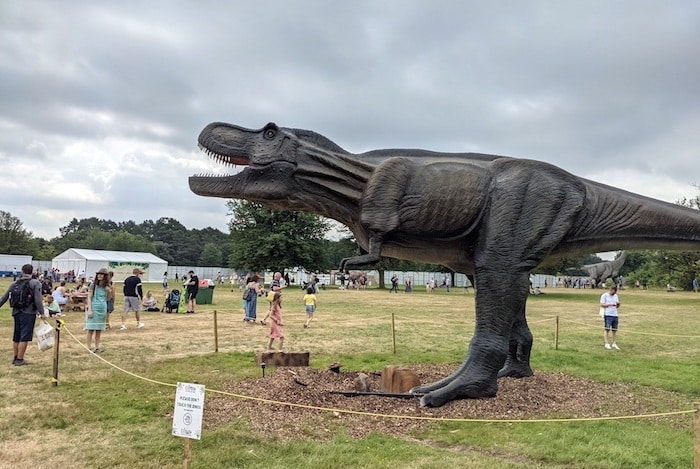 We all enjoyed our trip millions of years into the past, being greeted by rows of teeth, huge feet and roars all round us as we left.

The Jurassic, Triassic & Cretaceous eras are here and living wild in Manchester and should be seen before they disappear into extinction again.