Dedicated to all Defenders of Human Freedoms: The Art of Paul Peter Piech opens in Manchester 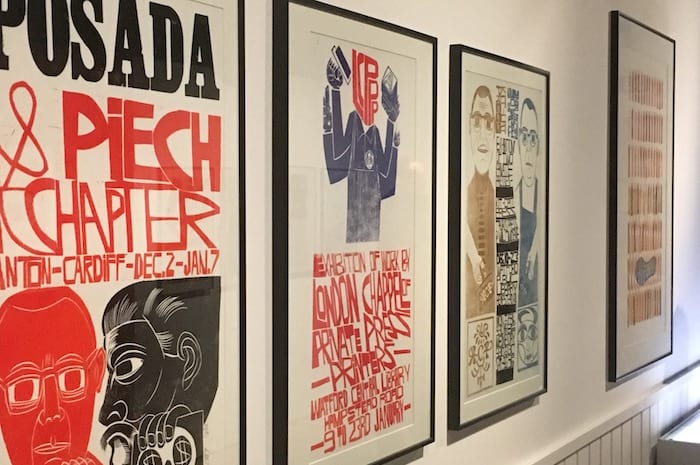 See some of the twentieth century’s most daring political posters and prints as an exhibition featuring the work of artist and printmaker Paul Peter Piech gets underway at The People’s History Museum.

Piech is one of those inspiring figures who tells us that we hold the power of change – and this exhibition is the unique opportunity to engage with his art, message and life, whilst also marking the 20th anniversary of his death.

His colourful posters and prints are loaded with phrases ready to pull the audience in, such as John Donne’s ‘Any man’s death diminishes me, because I am involved in mankind’.

The exhibition lets us not only engage with a range of artworks including those from the Piech family’s private collection, but uncovers more about how his experiences as a humanitarian and campaigner – for groups such as the CND and Amnesty International –  shaped his work.

Visitors to the exhibition will also be able to discover how Piech developed his printmaking techniques from woodcut to letterpress. His original printmaking tools, rollers and linocutting equipment will be on display, thanks to the Regional Print Centre which is jointly curating the exhibition with The People’s History Museum.

Although Piech spent much of his life in Wales, he was born in America to Ukrainian parents in 1920. He attended New York’s Cooper Union School of Art but his studies were suspended by the outbreak of the Second World War, during which he was posted to the UK. Here he met his future wife, Irene Tomkins, moving to Wales after the war and then London where he refined his skills in fine art and lithography at the Chelsea School of Art.

Piech went onto create some of the most iconic posters of modern times – including the psychedelic -inspired prints with what were at the time socially ground-breaking messages including ‘Racism is a Poison’ and incorporating quotes from influential figures such as Martin Luther King’s ‘Love is the only force capable of transforming an enemy into a friend’.

Mark Wilson of the People’s History Museum, says “Piech’s own support and voice for liberal causes together with his skills and artistry in printmaking make him one of the masters of the political poster, which this retrospective explores and celebrates.

“He was also a great observer of his time, often using the words and quotes of politicians and leading figures in his visuals. To understand his work and legacy, you need to understand the man, and through Dedicated to all Defenders of Human Freedoms we’ve set out to share Piech’s story as well as his work.”

What makes the exhibition even more interesting is that Piech wasn’t only an activist, he was also an advertising man working as artistic director on big campaigns for companies like BP, ICI and British Steel.

He also started Taurus Press which became a platform for his progressive political views.

To see Piech’s work is to witness some of the key social and political messages of the 20th century take shape, as well as exploring the relationship between advertising and activism. Have a look for yourself at The People’s History Museum.

Dedicated to all Defenders of Human Freedoms, The Art of Paul Peter Piech is on until 12 February 2017 and is free.
www.phm.org.uk