Manchester’s got pretty much everything covered when it comes to Christmas. The German markets. Mulled wine by the gallon. Bratwurst by the dozen. Zippy is on his perch. Spinningfields is brimming with teepees and igloos, and the Manchester Ice Rink on First Street has just opened.

We’ve got secret Crimbo cinemas and Santa Claus cruises. There aren’t many places that can beat Manchester at Christmas time. But there’s one thing that’s never guaranteed. Snow.

Christmas just isn’t Christmas without a bit of the white stuff. So if you’re still not feeling the Crimbo spirit, how about a trip to snowy Prague via Rock & Rye?

In case you haven’t been, Prague is something special this time of year. Roc & Rye are hosting a Czech Christmas experience that’s sure to make your toes tingle and warm your cockles from the belly up.

The handsome bar staff know their stuff and they’ll be on hand to slap together some of the quirkiest Christmas cocktails like the iced mocha, made with Baileys and sprinkled with cinnamon or the After Eight hot chocolate, a mixture of chocolate and mint and Braca Menta.

Tear into the warm vánočka – that’s Czech Christmas bread to you and me – clink beer steins and drink to the best season in the best city. You’ll be slurping Staropramen, the number one Czech beer, and losing all count of time. 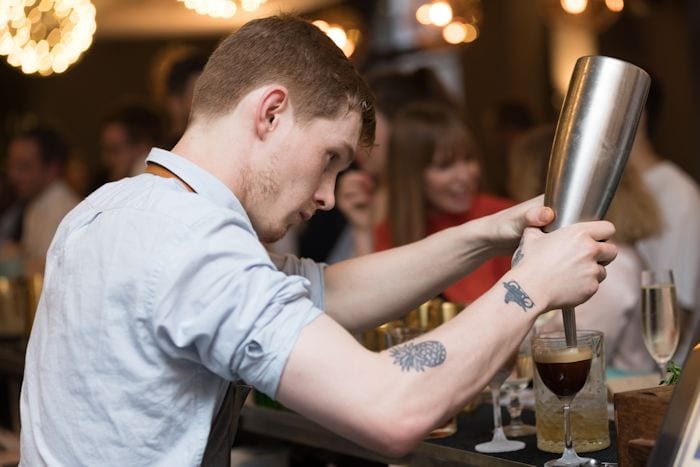 If mulled wine is more your thing, order yourself a cup of the authentic stuff. This one is tangy and warming, pimped with a bouquet of winter spices.

Sprinkle a little Czech magic and you’ve got yourself a night to remember. Or not, depending on how much Staropramen is consumed.

Either way, this is bound to warm even the Scroogiest of hearts.