Curfew: behind the scenes of the new TV drama filmed in Manchester starring Billy Zane and Sean Bean 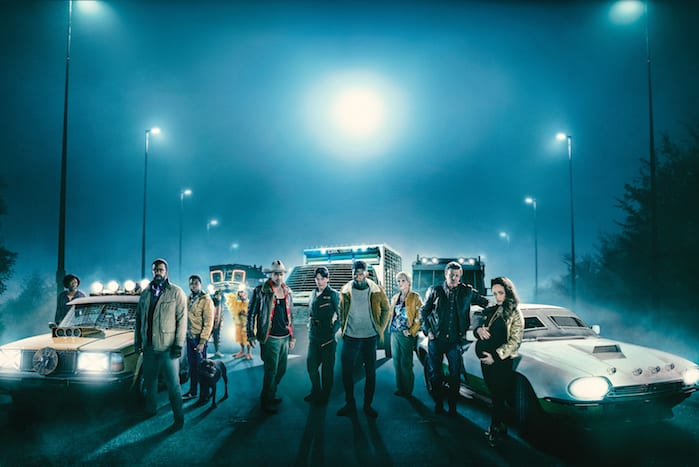 Next time you’re in Argos, be sure to have a close look at the customer beside you because there’s a good chance it might just be a Hollywood star. Billy Zane, for one.

The actor popped into the Manchester store when he was filming Sky One’s Curfew in the city last year.

“I was fascinated. I just wanted to stay and keep buying things,” says Billy, 52, who’s appeared in Titanic and Dead Calm.

“He kept saying ‘Argoose’,” comments his co-star Jason Thorpe, the man responsible for introducing him to the unique shopping experience.

“We walked in and Billy went, ‘Where’s the stock?’ The woman we spoke to was just… open-mouthed.”

It was a rare bit of downtime on the set of Curfew, an eight-part dystopian thriller from the producers of Peaky Blinders that’s part-road trip, part-horror.

“I read the script and had no idea what was going on,” admits Malachi Kirby, 29, who plays Michael.

“It was just crazy, I’d never read or seen anything like it. It was scary because it felt like I was coming into unknown territory and I didn’t have any references at the time. I think the fear of it was what excited me. Taking a big risk meant we had the chance to make something incredible.”

Set in the near future, by day the world is much as we know it but when dusk falls the shutters come down, the streets are cleared, and a curfew is enforced to protect the remaining population from a virus that’s sweeping the country.

But a few people believe they’re paying too a high a price and decide to take part in an illegal street race set up by an elusive tech billionaire, Max Larssen, played by The OC’s Adam Brody.

Over one night, 25 teams set off from South London to the Scottish Highlands in a bid to be the first to reach the finish line by sunrise and win the chance of escaping.

“It’s a very different show to anything else on British television because it’s not one person’s story,” explains director Colm McCarthy, 45, who’s helmed episodes of Peaky Blinders, Sherlock and Black Mirror.

“Every episode focuses on different characters, different cars, different sets of relationships. They all have a dark past and some reason that’s put then into this extraordinary circumstance where they’re willing to say, ‘I’m going to risk death for the possibility of freedom’ and what that means for different people.

“There’s a lot of flashbacks too, to before the outbreak and what’s happened since.”

“Television-making is like filmmaking now so it’s a collaborative medium, and basically what you do, if you’re clever about it, is hire really good people and then get them to do everything,” quips Colm.

“Then you go, ‘Wouldn’t it be great if…’ and ask for something impossible, and they go, ‘sure’.”

The production involved months of night shoots, stunts, various locations, and a huge cast, but “the most important thing in a show like this is keeping what’s at the heart of Matthew Read’s script,” says Colm.

“It sounds really glib because obviously all that technical stuff is complicated, but the real danger is getting lost in all the wowness of it, and then it not being about the most important thing, which is the human stories.”

Billy, who plays the flamboyant Joker Jones, one third of Team Awesome alongside Jason’s El Capitano and Guz Khan’s Cheese, describes Curfew as “a few of my favourite things.”

“The love of Eighties road movie cinema, wicked gun play, and intelligent comedy and a variety of characters who are remarkably grounded and real,” he says.

“The mashup of these things is high risk, high reward. It’s a fine edge to ride and the proof’s in the pudding, it seems to objectively entertain.”

The cast might look like they know what they’re doing behind the wheel, but Jason admits he’s no expert.

“I’ve only got a provisional licence, but said that in the casting and they said that’s fine,” he admits.

“I had my first stunt lesson with The Stig, and an ambulance is really hard to drive,” says Phoebe who plays paramedic Kaye Newman, one third of the Med Vac 239 team alongside Michael and Ruby, played by Aimee-Ffion Edwards.

“More than once Mal had to hold my hand, but when you’re trying to reverse in the bull pit and it’s 5am and it’s snowing it’s a very stressful situation.”

Phoebe was also taught how to do CPR. “It’s really tiring, no one tells you that,” she says. “Although the big battle was trying to work out how to turn on and off lights in the ambulance. That took about half an hour every day.”

Another night she found herself running down a motorway. “They said, ‘We’ll have a camera on the back of a car and we’ll just drive and you just keep up at the back’. I was like, ‘I’ve just eaten a doughnut, I can’t do that’.”

Logistically, that scene was one of the toughest to shoot. “Getting a drone up (to film) was fine, but closing down a motorway approach to Manchester in order to shoot at night was pretty hard,” says Colm. They were up against the elements too.

“We filmed a lot of it during the Beast from the East last year and we were all shivering and freezing. But nobody got hurt, that’s the most important thing.”

At least the actors didn’t harm themselves. It’s a different story for the characters.

As Colm comments, “Not everybody completes the race, that’s for sure.”

Curfew begins on Sky One on Friday 22nd February.