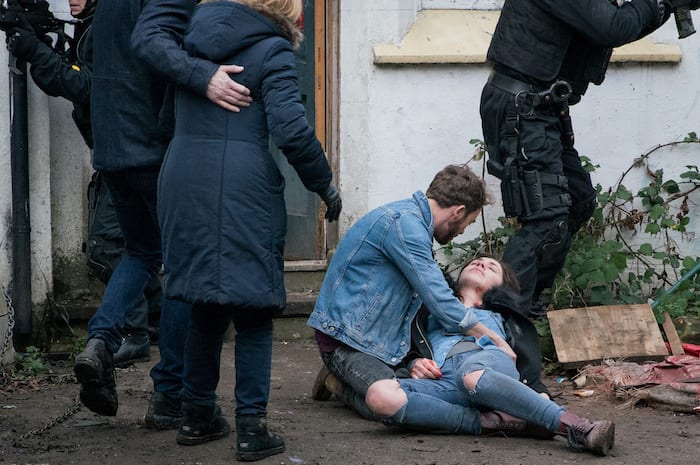 Blood will once again be spilt on Coronation Street in the week ahead, as the hostage situation for Shona and her jailbird son Clayton comes to its dramatic conclusion.

In scenes that echo the dramatic moment David Platt cradled his dying wife Kylie in his arms, he will be seen coming to the aid of his new love Shona who is covered in blood, in new pictures released by ITV. But will she survive?

In other dramas in Weatherfield, Seb has developed a secret crush and there is set to be a disastrous launch of the new hair salon.

And Michelle Connor is about to drop a baby bombshell on her hubby Robert Preston.

Here’s your episode-by-episode guide to what lies ahead in the coming week on Corrie.

Remaining held hostage by killer Clayton, Shona tries to talk to her son and manages to distract him and kick the knife away from him and across the floor.

She runs out to be faced with a wall of armed officers, as she runs back into the building a terrified David watches with his heart in his mouth.

Will Shona get out alive? Shona staggers from the building covered in blood and sinks to the ground.

David watches in anguish and cradles her in his arms, just as he did with his dying wife Kylie. Is history repeating itself?

Seb’s got a secret crush

Sarah discovers that Gary is paying Seb a reduced wage, less than his other builders, and puts things right insisting Gary pay him the same amount. A grateful Seb looks at her wistfully.

Seb gets carried away

It’s Seb’s 18th birthday party, and unaware that Eileen and Faye are planning a surprise party for him he thinks everyone has forgotten. Pleased to see Sarah and Gary at loggerheads, he is thrilled when she says she has a birthday surprise for him later.

Meanwhile, Sarah apologises to Gary for arguing and tells him to meet her at No.8 where she has a surprise for him. Eager to get rid of Seb whilst she prepares the surprise party Eileen tells Seb that Sarah is looking for him.

Seb calls at No.8 to find the door open. He lets himself in and finds a note from Sarah which reads “In the bath, waiting for you!”. Seb heads upstairs, unable to believe his luck.

Yasmeen is shy of Geoff

Geoff arrives at No.6 with flowers for Yasmeen and his overnight bag. Yasmeen’s clearly uncomfortable and making excuses hurries out.

Later, Yasmeen confides in Cathy that she is scared of letting Geoff stay over as she has only ever slept with Sharif.

She goes home to explain to Geoff, but how will he react?

Nick is flirtatious when a woman he recognises from a nearby salon pops into the barbers, but the wind is taken out of his sails when she reveals she is Rachel the owner of his rival salon and intends to put him out of business.

Robert tells Vicky that he can’t take Tyler back on at the Bistro, but he has got him a job at a mate’s cafe in Macclesfield.

He also tells Billy that he would like to train up ex-offenders from the bail hostel. But he suddenly has other things on his mind when Michelle tells him she thinks she might be pregnant.

Carla tells Gary she has a leak in the ceiling and wants him to fix it as cheaply as possible. Gary reminds her that the whole roof needs replacing but Carla says he is just after more money.

Gary reveals to Carla that he has hired Jan to help him with the factory roof, but Carla reiterates that she is not getting a new roof until absolutely necessary.