Corrie spoilers: ambulance dash and Abi arrested in week ahead 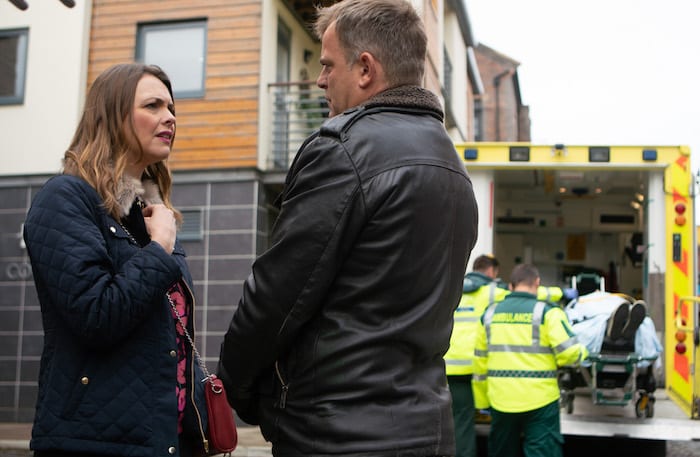 There’s a hospital dash, secrets revealed and a prison sentence in the week ahead on Coronation Street.

Abi’s life spirals out of control, a tipsy Audrey gives an emotional speech and a worried Sinead secretly refuses chemotherapy to protect her unborn baby.

Here’s your episode-by-episode guide for next week.

Abi Franklin finds herself in deep water after drinking herself unconscious. Struggling with working at Street Cars, her day gets worse and worse as she confides in her son Seb that she has discovered the twins’ foster parents are taking the little ones to Lapland for Christmas – and she feels they are better off without her. Distraught, she cancels her visit to see them and downs a bottle of vodka as she watches them play in their foster parents’ garden.

In a drunken state Abi leaves a desperate voicemail on Tracey’s phone – begging her for help. Having consumed so much alcohol, a shocked Tracey discovers Abi lying unconscious ending with Abi loaded into an ambulance. Beside himself, Seb tells Tracy his mum’s life has fallen apart since she was accused of sabotaging Michelle’s car – and Tracy quickly becomes consumed with guilt.

A tipsy Audrey wins an award. After being wound up by Claudia she starts knocking back the wine as she dreads the award ceremony. After the recent turmoil between Audrey and Maria, a very tipsy Audrey takes to the stage to accept her award and makes an emotional speech about Maria and how she is like a daughter to her. After the ceremony she confides in David that she hates Claudia for coming between her and Maria – as Maria informs Emma that she’s made a terrible mistake leaving the salon.

Tracy confesses and Abi gets arrested

Unable to bear the guilt any longer, Tracy confesses she was the one who sabotaged the car and stole the laptop. Abi immediately throws her out of the hospital – and shortly after discovers that her contact with the twins is suspended because of her drugs relapse. When Abi tells Seb she is putting the twins up for adoption, Seb seeks revenge and trashes Tracy’s florist. Abi overhears the disruption and rushes in to stop Seb, as Ken spots her through the window and assumes she’s responsible for the damage. The police arrive to arrest Seb, who runs into the back room. In an attempt to protect him, Abi takes cash from the till and is arrested on suspicious of theft and criminal damage.

Reluctant to have another session of chemo, a worried Sinead is seeking alternative treatments. She goes for a homeopathic massage where she meets a young mum who shares the the fact she too has cancer – confessing she stopped having chemo in favour of homeopathy and specialist diet. This interests Sinead as she wants to try everything possible to keep her unborn baby safe. She invites her new friend Steff for a brew and they talk about alternative options to chemo treatment – something she keeps from Daniel.

Nick and Leanne’s night of passion is ruined

After previously telling Peter that she is getting back together with Nick, the pair decide to celebrate after convincing Simon to do his A-Levels before thinking about joining the Navy. While Leanne is in the corner shop, Elsa overhears her buying a bottle of wine for their celebration. Nick and Leanne indulge in a night of passion – as the buzzer goes and someone disturbs them. Nick drops a huge bombshell on Leanne who is shocked when he confesses he hasn’t been honest with her.

To stop Daniel going with her for the second chemo session, Sinead enlists the help of new friend Steff who calls Daniel pretending to be someone from the nursing home saying Flora is upset. Daniel leaves to visit Flora – and Sinead returns back home. She tells Daniel that her chemo was fine and also shares that she is going to start a vegan diet to give her and the baby a better chance – Daniel says he will join her. Steff tells Sinead she needs to come clean about not having the chemo.

Abi gets sent down

In an unfortunate turn of events, Abi loses both her family and her freedom as she is sent to prison for 16 weeks for the robbery of the florist but is pleased to discover her old friend is in the same prison.