Abstract illustration by Dulux boasts the city’s most defining features… 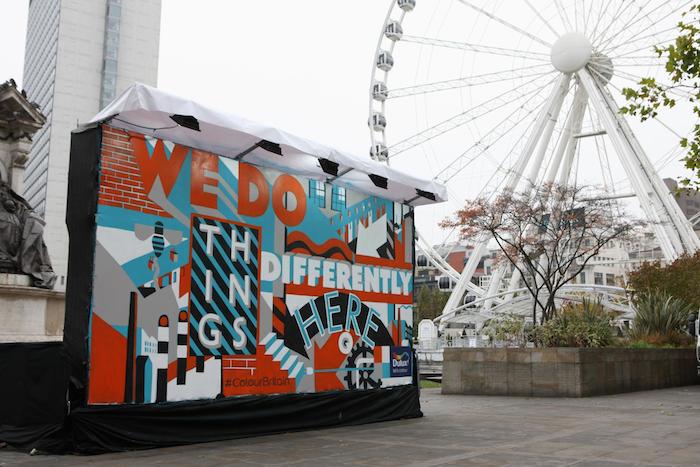 A giant piece of exclusive hand painted art, inspired by local heritage, colour and culture, will be unveiled today in Manchester. The installation is part of a nationwide campaign to remind people of the power of colour.

“inspiration from the wealth
of colourful stories”

The initiative ‘Colour Britain’ has been commissioned by Dulux, the country’s best loved paint brand, and aims to add splashes of colour to cities across the country. Residents from Manchester were polled to discover interesting stories of history, heritage, colour and culture, which formed inspiration for some of the UK’s most exciting artists.

To inspire the unique piece of artwork, Dulux asked Manchester residents to suggest some of their city’s most defining features. The survey revealed locals are firstly proud of being home of Coronation Street as well as Factory Records, The Hacienda and Manchester. Locals are also proud that the Olympic Games Opening Ceremony was directed by Manchester born Danny Boyle.

Renowned for her exciting use of vibrant colour and patterns, artist Emily Forgot took inspiration from the wealth of colourful stories and turned Manchester’s urban landscape into an abstract illustration.

Given the music scene in Manchester has played such a huge part in the city’s cultural development, Emily pays particular attention to the impact Factory Records has had on the city. She juxtaposes this with Tony Wilson’s legendary quote ‘We do things differently here’, with iconic red brick terraced houses – both completely synonymous with Manchester’s story-filled history.

This colourful artwork installation named ‘We do things differently here’ can be viewed at Manchester’s Piccadilly Gardens from today until 22 October.

Kieran Long, TV Presenter and Architecture Critic who is supporting the campaign says: “Colour can have a huge effect on our urban environment. Many of the greatest movements in architecture have been characterised by their intense and creative use of colour and the pleasure we get from the beautiful use of colours can enhance a sense of place and enjoyment of our towns and cities. This project should inspire us all to be more creative and imaginative with colour.”

Johnny Corbett, Dulux marketing manager, “We loved hearing Manchester’s favourite stories about their city. We believe life is a story and it deserves a colourful backdrop.”

Colour Britain imagery and footage of the illustrations will be revealed through facebook.com/dulux. Dulux is inviting the public to share stories of their hometown or village’s most colourful stories using #ColourBritain on Facebook and Twitter. One additional city, town or village is set to receive its own artwork as a result.