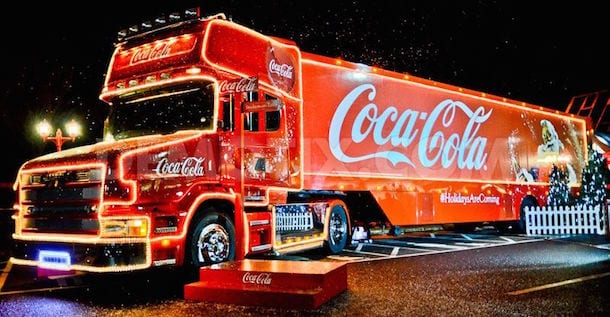 You know Christmas can’t be far away when The Coca-Cola Christmas truck tour gets underway and this year it’s stopping off at the Intu Trafford Centre on Saturday 5th December 2015 from midday until 8pm.

Visitors will have the opportunity to get up close and personal with the famous vehicle and take pictures with the truck as it lights up in a winter wonderland setting. They will also be able to enjoy a 150ml can of either Coca-Cola, Coca-Cola Life, Coca-Cola Zero or Diet Coke.

Radio presenters from Capital FM will also be at the stop to give visitors the chance to win tickets to this year’s Capital Jingle Bell with Coca-Cola, at the O2 arena in London.

Coca-Cola is also giving people the opportunity to win a personal visit from the Christmas truck and a hamper of festive treats worth £5,000. The competition is running on selected packs of all four Coca-Cola variants in the run up to Christmas.

This year the iconic ‘Holidays Are Coming TV’ advert returns to screens for the twentieth year and will be played in the run up to Christmas alongside the ‘Give a Little Happiness’ TV advert in December, encouraging people to spread festive cheer throughout the holiday season.

Ever since the Coca-Cola Christmas truck first appeared on screens in November 1995, it has become a regular feature of festive TV schedules in more than 100 different countries and means that Christmas is well and truly on its way.