Whether you know him as keyboard player of the Inspiral Carpets, musician in his own right, club DJ - he’s been playing at South on Deansgate for more than a decade - or radio broadcaster, the name Clint Boon probably rings a bell. Emily Oldfield popped into the BBC at Media City to meet this self-confessed ‘ordinary bloke from Oldham.’
Share
Tweet
Share
Chat

At the age of 56, Clint is a prolific broadcaster. When the Inspiral Carpets first went their separate ways in 1995, (they’re now back together), Clint turned to the airwaves to express his love for what he calls ‘quality music.’

I was born into
this amazing
place – a
beautiful
international
city.”

He’s been broadcasting for more than 20 years and is well known for his many years as Drivetime host on XFM Manchester. With his down-to-earth attitude and ‘top tunes’ which  celebrate so much more than chart music, he’s also gone on to host the popular Sunday 7pm to 11pm show on Radio X.

He’s been presenting Boon’s 80’s Experience on Saturday evenings on BBC Radio Manchester since January.  I was lucky enough to join him in the studio for his eleventh show. He quickly made me feel at ease, complete with a proper cup of tea and a proud smile.

“When it comes to picking tunes, I use the filter that I have in here,” he said with a flourish towards his head, still sporting his iconic mid-length hair. “If I don’t like a record, I won’t play it. Here I make a living out of loving music, and I love doing what I do.”

He’s honest and passionate and includes the North amongst his loves, filling his BBC show with top tunes and anecdotes about his times in Manchester.

The transition from musician to mixed radio roles was a notable change.

“I’ve gone from having one main job to a lot of jobs – but it’s good exercise and I gain new knowledge.” 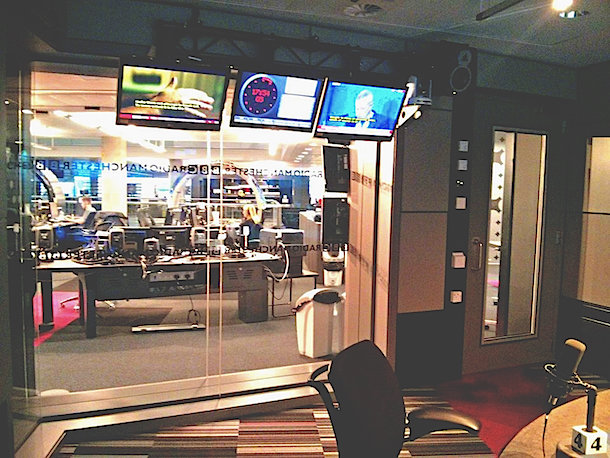 Something else which has changed over time is his presenting style. He admits that he has grown more relaxed and natural

“Six or seven years ago I spoke better then, trying to do what I thought would keep me in the business.  But what people really want is something down to earth.”

And it’s on his BBC show especially that Clint embraces an honest approach which people enjoy. Rather than Drivetime which was commercial and upbeat (“every time I talked there was music behind my voice’), now he talks ‘dry.’

“People want me for my personality, not talking over beds – and it works.”

Clint works hard to make it ‘an intelligent listen’, dedicating each of his two hour shows to a particular  year and artist. On the day of my visit, the music he played was from the year 1988, with songs from The Teardrop Explodes to The Police amongst others, and a featured artist, too – Erasure.

He has in-depth musical knowledge inspired by his own experience as a musician – particularly the early days of The Inspiral Carpets, whom he joined in 1986.  He went from being an “ordinary lad from Oldham who played music for nothing” to selling out venues and adding his iconic sounds to tracks which are indelibly associated with Manchester such as Sackville and This is How It Feels. 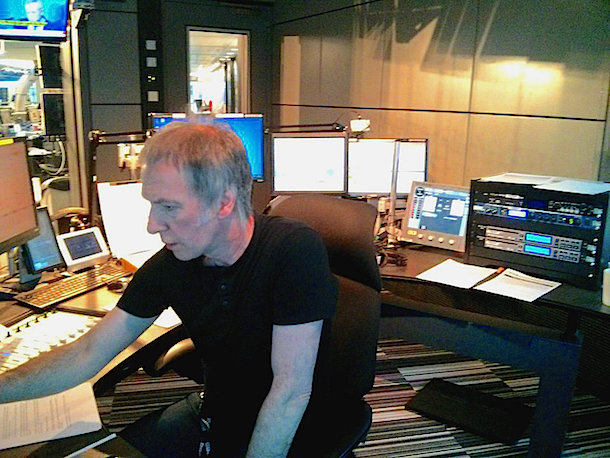 Music, Manchester and radio are all intimately connected, says Clint, and have allowed for so much creativity to flourish.

“I’m proud of what this city has achieved over time,” he said, looking out of the window at MediaCityUK and out across Manchester. Clint gestured in the direction of the Beetham Tower, where he would l be playing a DJ set for a charity event later that evening. “I was born into this amazing place – a beautiful international city.”

Radio has kept Clint connected to the Manchester he loves and to the Boon Army, his listeners from all over the world. Fans tweet their approval as he broadcasts, and Clint tells me of one dedicated listener who’s travelling down from Scotland for his later live set. Not bad for a lad who remembers recording early Inspiral tracks and attempting to get them airtime on the radio.

“I remember using a reel to reel tape recorder,” he reflected, a far cry from the masses of switches and dials which surround him in the BBC studio.

“Fortunately, radio in this city helped people. It helped the Inspiral Carpets get the breaks. There are people still working in this building who helped me out.”

It is clear that Clint still believes in the power of radio to celebrate Manchester and as a way to nurture the creative talent we have here. One of his favourite local bands around right now is Cabbage –  “I put them on podcast about 8 weeks ago.  They are going to smash it. Watch out.”

He talks about other bands who have benefited from local and BBC airtime too, including JJ Rosa from Stockport who “looks like a star and sounds like a star” and also the very popular Blossoms.  Proof that the sounds of this city are still something to get excited about – both its music scene and its radio, too.