“I have always believed that success is down to more than just having talent and good luck,” said Gary Neville at the launch of his ‘game-changing’ University Academy 92, the revolutionary new higher education project conceived by the former Manchester United captain and his fellow members of Old Trafford’s legendary Class of 92.

“There should be no limits to what you can achieve with the right preparation. Our aim is that UA92 graduates would leave with an academic qualification, of course, but also with a range of other skills such as how to deal with pressure, understand finance, leadership and presentational skills, and also how to maintain a healthy body and mind. In other words, the complete package you need to succeed in the workplace.

“When we finished our careers as footballers we felt we should try to offer to young people the same opportunities we had. We are launching to engage business, higher education and government in something we really believe in.

“We recognise that many young people are vulnerable and need help and support. When we were at Old Trafford, we received much more than are football education. So we asked ourselves what were the basic traits needed to enter the world of work and lead a fulfilling life. We wrote down key ten attributes.” 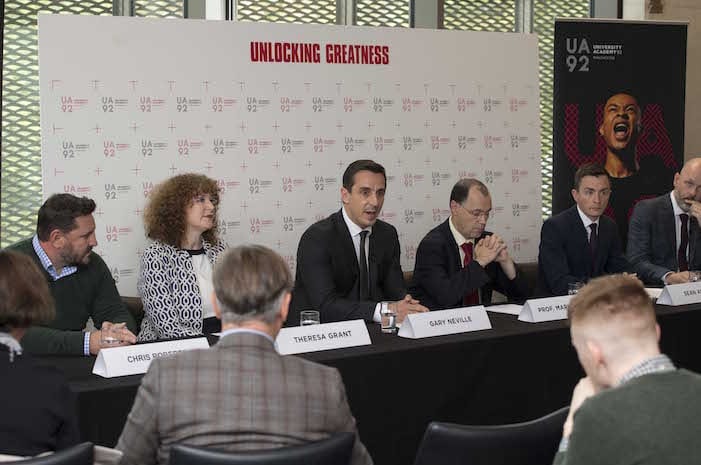 Neville described the partnership with Lancaster University, one of the UK’s top ten with a background of developing higher education facilities in the UK and overseas, as “a perfect fit”. Ninety per cent of Lancaster’s student intake is from state schools which he said “resonates with us and is important to us.”

Professor Mark E Smith, vice-chancellor of Lancaster University, said: “We were very interested in the ideas presented by the Class of 92 because they matched closely with a number of things Lancaster already does very well, particularly innovation, widening participation and employability. We therefore felt we could make a strong contribution to a project which seeks to do things differently.

Professor Smith said the number of students entering for the first term would depend upon consultations yet to take place. Entry qualifications would be “mid tariff A-levels” though UA92 would be assessing flexible ways of looking at the broader potential of students from poorer performing schools. The intention was to place students in paid employment provided by business partners, but degree courses will be subject to university fees. 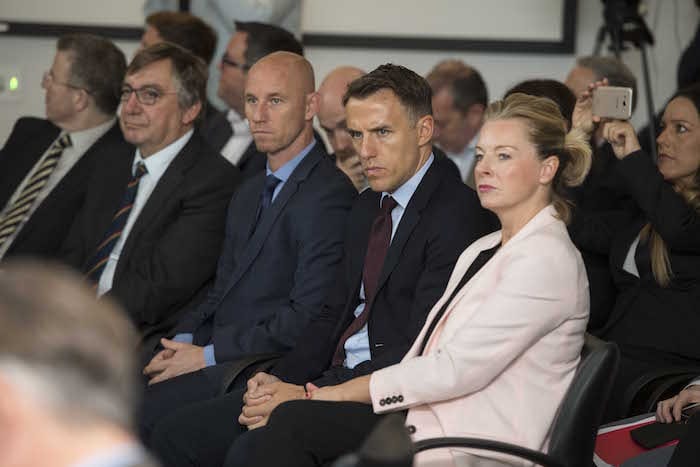 Sean Anstee, the Leader of Trafford Council, commented: “Trafford already has some of the best performing schools in the country, as well as a rich and successful history of sport and business, so it is an ideal home for this new and exciting education initiative. With Manchester United Football Club, Lancashire County Cricket Club and Media City on our doorstep not to mention more than 11,000 businesses, UA92 students will find it an inspirational location in which to study.”

He said the project could boost Trafford’s economy by £26million a year.

“We will now proceed to the public consultation phase of the project and see what local people think of the idea. In my view it presents a fantastic opportunity to revitalise and support our local communities. It will create jobs and attract 6,500 students to the borough by 2028.”

University Academy 92 – said to be a multi-million pound project also supported by Manchester United and Lancashire County Cricket Club – is expected to welcome its first students in September 2019 to a newly-built campus on the site of the Kellogg’s headquarters. The company announced earlier this year that it was moving its HQ from the corner of Warwick Road and Talbot Road in Old Trafford to MediaCity.

Sir Alex said: “I want to wish Gary, Nicky, Ryan, Paul and Phil good luck as they embark on a commendable project that demonstrates their commitment to giving something back to the community that played such a formative role in their lives. It is a project with great potential and I hope that their efforts make a genuine difference and provide opportunities in life for those that otherwise would not have been given a chance to realise their potential.”

UA92 will also create a unique partnership with Trafford College which will give students aged 16-19 years old access to high quality technical and professional qualifications combined with a joint enhanced skills development programme.

Mayor of Greater Manchester, Andy Burnham, said: “What a fantastic addition to our already highly sought after portfolio of Higher Educational establishments.  Manchester already has huge appeal to prospective students and this particular University offer opens up a whole new audience for us and opens up new avenues for economic growth and regeneration. I am proud that we can offer such a high profile, unique and holistic approach to education and its Manchester once again leading the way, breaking new ground and securing a successful future for many young people.”