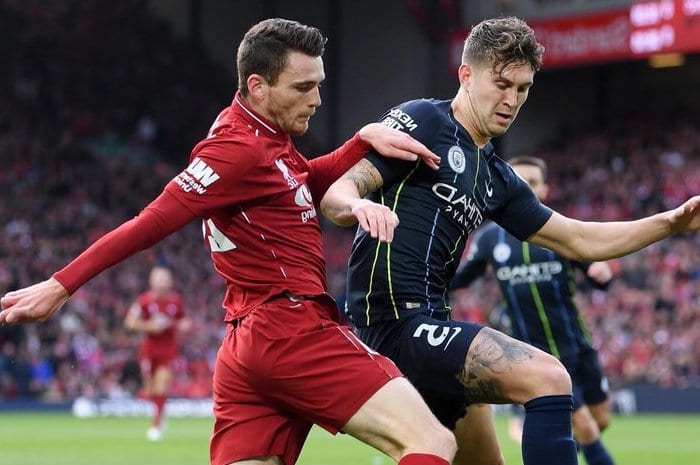 Super Sunday saw the Blues return to the top of the Premier League as they became the first Premiership team to stop Liverpool scoring this season.

We have a dreadful record at Anfield having not won there in the Premier League since 2003, and should have taken all three points when Leroy Sane went down in the 86th minute earning us a penalty. With no Aguero on the pitch, Mahrez stepped up and blazed it over the crossbar, ending any hope of finally breaking the Anfield jinx.

However, Guardiola was very pleased with what he called a consistent and solid performance against a team we really struggled against last season.

“Well, we tried, the important thing is we tried,” he said. “We didn’t concede many shots on target so this is key at Anfield and is quite special in terms of the environment.

“From all actions, from corners and free kicks, they’re so tall and are stronger than us but we defended well, the back four was so good in their positions.

“At the end, the manager has to analyse what we have done when we plan what we have to do, that is the most important thing. We were consistent, we were solid.

“As a team you know they would punish our mistakes, and at the back four we controlled it very well. So, it would be better to win at Anfield, but we don’t lose, last season we lost here, this season we draw, maybe next season we win, we will see.”

The pairing of John Stones and Aymeric Laporte was a big part in the overall performance on Sunday – the first time we haven’t conceded there in the Premier League.

Both Laporte and Stones have looked likely of a mistake or two since joining City but yesterday they looked every bit the part.

Sky Sports analyst Graeme Souness believes the pair represent both the present and future of the club.

“I think Laporte and John Stones are the future. They might be the present as well,” he said. “Certainly, when you look at the age of them, and they’re both lean and quick and good footballing types. You can see they fit the bill for the way he wants to play, and they could be a partnership for a long time. John Stones, when you think back to his days at Everton, was partial to making a mistake and I think he’s got that out of him.”

Aguero was not on the pitch at the time the penalty was awarded. Had he been, there is a good chance he would have added to his already impressive tally for the Blues.

City’s all-time top goalscorer has hardly been out of the headlines in the past twelve months as he continues to break records and achieve further milestones. With 148 Premier League goals, he has already equalled Alan Shearer’s tally for Newcastle United – although the latter also scored 112 goals for Blackburn Rovers before joining his boyhood club Newcastle.

One more milestone the Argentine will be hoping he can reach will be to win the Ballon d’Or – he is one of the contenders for the prestigious award revealed by France Football.

The award recognizes one player’s outstanding contribution during a season for their side and has been dominated for the past decade by Cristiano Ronaldo and Lionel Messi.

Blues fans will be keeping their fingers crossed for him to become the first ever City player to win the award.

If Aguero is successful, it won’t be the only first. This year, for the first time ever, a women’s winner will be announced.

The 15 nominees for the award are announced today and will no doubt shine a spotlight on the fact that women’s football is growing all over the world.